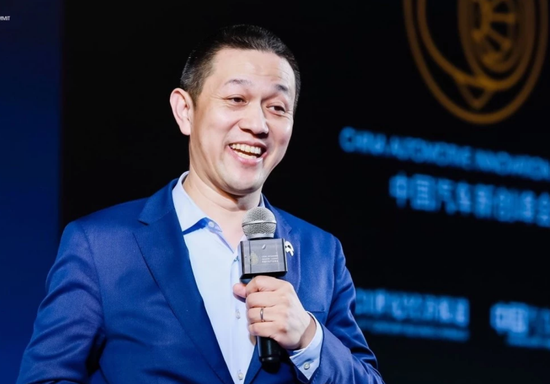 With the delivery of 100,000 new cars in the second half of the year, where does NIO’s confidence come from?

The goal of delivering 100,000 new cars in the second half of the year remains unchanged. The ET5, which will be delivered at the end of September, will hit the monthly delivery target of over 10,000 in December this year.

That is to say, not counting the past July and August, NIO will deliver an average of about 20,000 vehicles per month in the next 4 months, with a cumulative delivery of nearly 80,000 vehicles to make Li Bin’s satellite successfully launch into the sky. . The tone is quite big, and the challenge is not small.

The net loss exceeded 2.7 billion yuan, a record high in 8 quarters. The more unfavorable news is that Weilai has been in a state of continuous decline in gross profit margins for a long time. new low.

So, where does NIO’s confidence to deliver 100,000 new cars in the second half of the year come from? Profitability cannot be proved by itself for a long time, what should Weilai do?

Let’s penetrate the second quarter financial report of Weilai together.

100,000 vehicles will be delivered in the second half of the year, and ET5 is Li Bin’s fireman

At Weilai’s analyst meeting in the second quarter, Li Bin focused his speech on the delivery level in the second half of the year.

The annual delivery target here is the one set by NIO at the beginning of this year-the goal of delivering 150,000-200,000 new cars in 2022. If you count the 50,827 new vehicles that NIO has delivered in the first half of the year, it means that NIO will have to complete at least 100,000 deliveries in the second half of the year to barely meet the annual delivery target threshold.

100,000 vehicles were delivered in 6 months. From the perspective of NIO’s long-term delivery level, the pressure is not too great. After all, the cumulative sales of NIO in 2021 will only be in the early 90s.

In addition, two months have passed since the second half of the year, minus the 20,729 vehicles delivered in July and August. In the next four months, Weilai will deliver an average of 20,000 vehicles per month in order not to slap in the face.

From an outside perspective, the sudden explosive growth in sales is not easy. But as an authority, to put such a large satellite, you must have a good engine, and this engine may be the ET5 that will be delivered immediately. 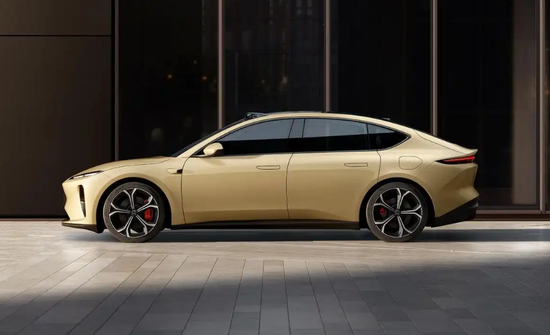 Li Bin revealed that in terms of preparations in all aspects, Weilai is very confident that the ET5 will be delivered over 10,000 in a single month in December, and the actual delivery number will definitely be higher than 10,000.

In less than 100 days, the monthly delivery exceeded 10,000. The Wenjie M5, which was escorted by Huawei before, recorded a cumulative delivery of over 10,000 in 87 days…

NIO President Qin Lihong also expressed confidence in the ET5. At the Chengdu Auto Show not long ago, he said that the ET5 would surpass the BMW 3 Series in sales a year after delivery.

In short, from Li Bin to Qin Lihong, NIO’s No. 1 and No. 2 characters have all released their words. It seems a bit like “super-British and US” back then, but there is one problem that must be made clear, no matter who is catching up Who, where is Weilai’s confidence?

Regarding this issue, Li Bin also made it clear at the analyst meeting.

Li Bin said that the current orders for new models are very sufficient, and the ET5 (delivery cycle) will undoubtedly take a long time.

With sufficient orders, the pressure comes to the production capacity. Li Bin revealed that by the fourth quarter, Weilai will have two factories producing at the same time, including the Xinqiao F2 factory that is currently undergoing debugging. Moreover, the new plant will be fully used to produce ET5 in the initial stage of operation.

It is reported that the Jianghuai Weilai factory (F1 factory) where Weilai and Jianghuai signed an OEM agreement has a production capacity of 20,000 vehicles per month. According to the agreement signed between NIO and JAC, the main models produced at the plant are the 866 series and the ET7.

From this point of view, Weilai currently leaves enough room for ET5 in terms of production capacity.

Of course, in addition to the preparation of production capacity, from the perspective of NIO’s long-term sales trend, Li Bin’s confidence in the delivery in the second half of the year is also supported by the basic disk of the 886 series.

In general, with the emergence of NIO’s latest ES7, the three 886 brothers, who are regarded as competing products, have not been greatly impacted. 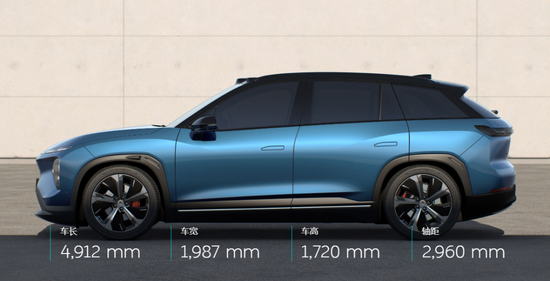 It is foreseeable that with the gradual delivery of the 2022 886 and the delivery of the ES7, Weilai’s rear is still guaranteed, and it is reasonable to have a certain increment.

Of course, whether NIO can achieve its sales target in the second half of the year still depends on whether ET5 can successfully climb the production capacity as Li Bin thought. After all, Li Bin himself has put the risk factors on the table.

Specifically, Li Bin believes that what affects the delivery schedule in the second half of the year is mainly the capacity at the supply chain end, such as the problem of the yield rate of integrated die-casting suppliers. And with the increase in delivery tasks in the fourth quarter, the pressure on the supply chain will also be greater.

In addition, the repeated epidemics across the country also have a certain impact on the stability of the supply chain, but Li Bin also added that with the previous experience in Shanghai, the risk of the epidemic is relatively controllable.

Costs have been under pressure for a long time, how does Weilai turn over?

Although NIO executives are confident in future delivery, after all, delivery can only describe a part of NIO’s business status.

The invisible crisis of Weilai’s current operation needs to be made clear with financial indicators.

The financial report shows that in the second quarter of this year, Weilai’s revenue exceeded the 10 billion mark for the first time to 10.29 billion yuan, a year-on-year increase of 21.8% and an increase of about 4% from the first quarter.

However, the growth in revenue was not driven by growth in deliveries. NIO delivered 25,052 vehicles in the second quarter, down slightly from 25,768 in the first quarter.

However, from the perspective of Weilai’s gross profit margin, the increase in vehicle prices has not fully covered the impact of rising battery raw material prices. 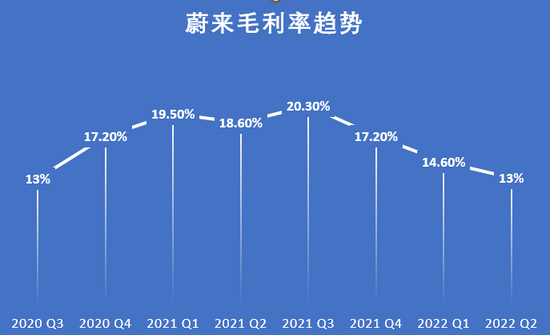 Judging from the official attitude of Weilai, it is still uncertain about the future prospects. The vice president of finance of Weilai said at the analyst meeting:

“In terms of battery costs, we also face many uncertainties and challenges, which will negatively affect our gross profit margin.”

It’s hard to say how long this short term will be, but it is very important to Weilai. After all, Li Bin has already set a profit target in 2024. If the gross profit margin is not substantially improved, the profit target will eventually be a mirror image.

Not to mention, in addition to cost pressure, NIO is also in the stage of large-scale investment in research and development.

According to the financial report, Weilai’s R&D expenditure in the second quarter was 2.15 billion yuan, a significant increase of 143.2% compared with the second quarter of last year and a 22% increase compared with the first quarter of this year, setting a new record since Weilai went public. The financial report shows that the main reason for the expansion of Weilai’s losses is the increase in research and development expenditures.

After a little longer, we found that since the second half of last year, NIO has been generous in R&D expenditure and has always maintained a high level of operation.

The focus of research and development is mainly on the development and design of new products and technologies.

According to NIO’s plan, the new brand models will be launched in 2024, all of which will be equipped with NIO’s NT3 technology platform. Based on the advance of vehicle development time, the second half of this year and even the whole of 2023 will be a critical period for spending money on research and development.

In addition, Weilai also revealed not long ago that it has formed a battery R&D team of more than 400 people. The research and development direction involves full-stack links such as cells, battery materials, and battery packs. .

In addition, Li Bin also revealed at the analyst meeting that Weilai’s goal in core technology areas, including chips, is to build self-research capabilities.

From Sanden to chips, as well as the development of new brand model platforms, it is foreseeable that NIO’s R&D expenditure will remain high for a long time to come.

So the question is, how can Li Bin achieve his profit goal with the cost that cannot be reduced before, and the R&D expenditure that cannot be cut later?

Rapidly iterating on the NT2 platform model is one answer.

Earlier at the analyst meeting in the first quarter, Li Bin said that compared with the previous generation platform, the NT2 platform model has a larger profit margin.

Therefore, it becomes very urgent to complete the iteration of new and old products as soon as possible.

In addition, we can also see a clue from the delivery speed of the old and new platforms:

According to the rhythm of NIO’s previous new car launch, NIO DAY launched a new car last year, but the latest ES7 was launched half a year in advance, and the time from launch to delivery was just over two months.

Comparing the ET7, which has been delayed for more than a year, and the ET5, which was delivered within a year, the new platform models are getting faster and faster.

Moreover, the current 866 series will be upgraded based on the NT2 platform in the future.

At the end of the analyst meeting, Li Bin’s speech revealed a trace of unusualness.

When answering a question about the third brand other than “Alps”, Li Bin said:

“In the Chinese market, the demand for entry-level (models) and the mass market is growing very, very rapidly, and the penetration rate of electric vehicles in China is growing because of such a trend.”

As for more detailed information, Li Bin said that it is interesting to communicate with the outside world about “entry-level models” when it is appropriate.

Here we might as well take a bold guess, will NIO’s third brand drop to 200,000 yuan, or even the low-end market of around 100,000 yuan, to compete with Dolphins and even Baojun KiWi?

However, can Weilai, who sells cabbage at the price, still be called Weilai?

This article is reproduced from: http://finance.sina.com.cn/tech/csj/2022-09-09/doc-imqmmtha6600406.shtml
This site is for inclusion only, and the copyright belongs to the original author.