The jade saddle is covered with gold over Dan Chi, and the bones are tall and hairy. To put it bluntly, it looks good and can play.

This is the first feeling of Xinzhijia after watching the BYD seal conference.

There was no passion in this online press conference, golden sentences frequently appeared, and there was not even a cooperative applause.

But it is this plain style that occasionally has a touch of excitement, which perfectly fits the positioning of the seal. Low-key and restrained, practical is better than publicity.

After a long time, the BYD seal finally officially appeared.

Without further ado, let’s take a look at the car. 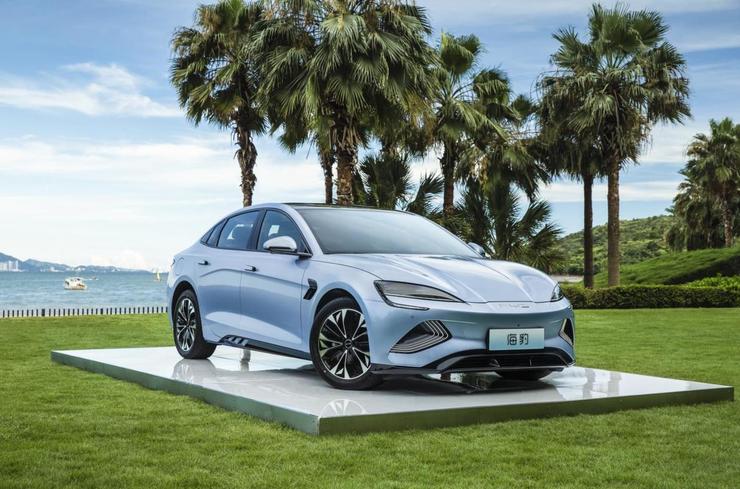 Seal released a total of 4 models. Three rear-wheel drive versions and one four-wheel drive performance version are priced at 209,800 yuan to 286,800 yuan. 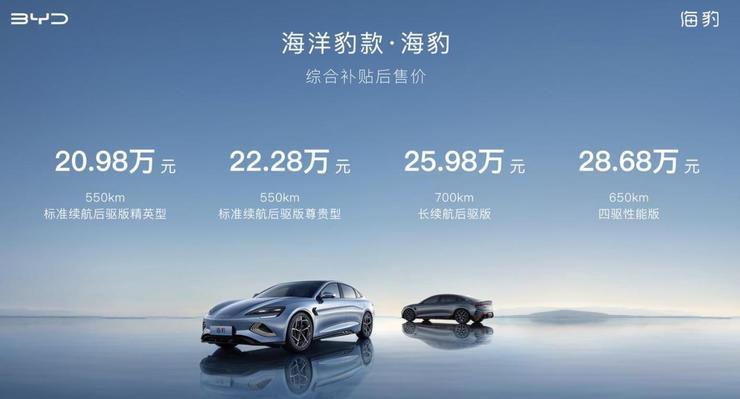 As the third model of BYD’s marine series, the seal still interprets its unique “marine aesthetics”.

In appearance, the low-lying stance of the body and the OCEAN X front face design make the seal look sporty from the front. The body proportions with short front and rear overhangs and long wheelbase are also very electric.

The body line of the seal is smooth and natural, and the streamlined design from the front hood, through the body to the rear of the car, fully conforms to the positioning style of a sports coupe.

In the shape of the rear of the car, the decorative parts on both sides of the rear bumper use dense horizontal ribs, and a large area of ​​black diversion structure in the middle not only effectively reduces the wind resistance, but also responds to the theme of “sea seal”.

The interior design and the sporty appearance also complement each other. The “wave-chasing” instrument panel, multi-function sports steering wheel, crystal gear lever and “heart of the ocean” central control layout all reveal the agility and texture of water droplets.

In addition to the interpretation of “marine aesthetics”, the seal is also BYD’s first model equipped with CTB battery-body integration technology.

It is understood that CTB technology is developed from CTP technology and is a more advanced and secure technology.

In the previous CTP scheme, the splicing and merging of the tray, the battery cell, the battery upper cover and the body floor must be completed successively during the assembly process of the body and the battery.

CTB’s solution is to integrate the battery cover with the body floor to form a “sandwich” structure that integrates the battery and the body chassis.

After using CTB technology, the strength and comfort of the vehicle will be greatly improved.

In terms of strength, CTB technology can reduce the roll of the vehicle when cornering at high speed, the body will become more stable, and the amount of deformation under various road conditions will be relatively reduced.

In the safety that consumers care about most, CTB technology also outperforms CTP technology.

Not only that, CTB technology makes the blade battery more closely integrated with the body, which can increase the torsional stiffness of the vehicle by 70%, exceeding 40,000Nm/°.

If the design of “marine aesthetics” and the blessing of CTB technology make seals naturally “soft on the outside and rigid on the inside”, then the powerful performance of rear-wheel drive and four-wheel drive makes them “uniquely gifted”.

In the era of traditional fuel vehicles, rear-wheel drive often represents the powerful performance and high price of vehicles, such as BMW 5 Series, Mercedes-Benz S-Class, Cadillac CT6 and so on.

According to the press conference, the standard and long-endurance versions of SEAL are both rear-mounted motors, while the four-wheel drive performance version is equipped with a front AC asynchronous motor and a rear permanent magnet synchronous motor, with a total power of 390kW and an acceleration of 100 kilometers in 3.8 seconds. 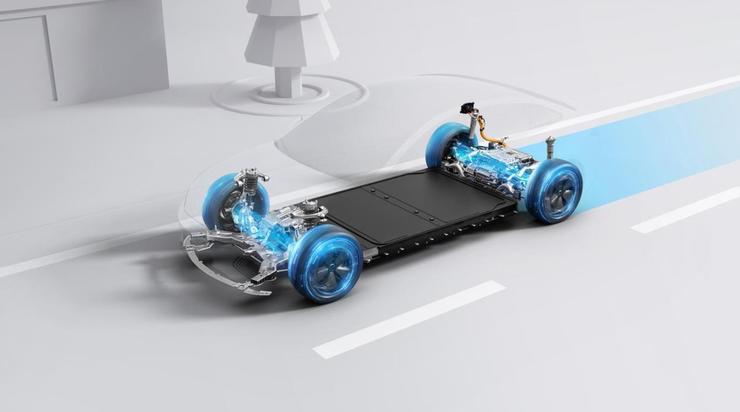 In order to make the vehicle’s handling more excellent, the seal’s chassis system uses a double wishbone front suspension and a five-link rear suspension, which is also a configuration that a considerable number of sports cars only have.

In addition, BYD e-platform 3.0 with the tram torque control technology iTAC is also one of the highlights of the seal. When the technology debuted two months ago, many car enthusiasts sighed, “You just step on the accelerator and leave the rest to iTAC.”

With the blessing of iTAC technology, Seal claims to allow ordinary consumers to enjoy the driving pleasure of professional racing drivers. It must be very attractive to many young people.

In addition to excellent sports performance, a new energy vehicle is naturally blessed with assisted driving technology. The seal is slightly conservative in the configuration of the assisted driving function.

Although the assisted driving function is not as dazzling as the new force models, it wins in that every function is mainly practical.

In terms of driving safety, the configuration of the seal is also enough to make people feel at ease. The DMS driver monitoring assistance system can use the infrared camera to monitor the driver’s facial features, eye features, and head and limb movement characteristics. Combined with information such as vehicle speed changes, it can judge the fatigue state and concentration. A warning is issued to prompt the driver to take corresponding safety measures.

In addition, SEAL’s head-up display system can project important driving information such as speed, speed limit, navigation, LDW, ACC, Bluetooth phone, etc., into the driver’s field of vision on the front windshield, allowing the driver to focus on the road conditions.

In terms of entertainment function configuration, the DiLink intelligent network connection system cooperates with the One ID account system to identify the identity through the digital key, making the system’s theme interface and usage habits more exclusive.

For audio enthusiasts, the HiFi-grade custom Dynaudio audio with 12 speakers for the mid- and high-end models of the Seal has a total power of 775W. It can express different scenes with four kinds of sound effects, namely original sound, dynamic sound, soft sound and speech, with a strong sense of experience.

Conceived by BYD, overlooking “the other side of the sea”

Seal is the third model based on BYD 3.0 platform. The previous two models were Dolphin and Yuan PLUS.

Dolphin and Yuan plus have become the dominant players in their respective market segments. The appearance of the seal may also put a little pressure on competitors such as Tesla model3, Xiaopeng P7 and Deep Blue SL03.

It is certainly an inevitable choice for the seals to rush out in the domestic market, but building these three models based on the BYD 3.0 platform also bears the hope of BYD going overseas.

Eight days ago, on July 21, BYD held a brand conference in Tokyo, announcing its official entry into the Japanese passenger car market. The three models of Yuan PLUS, Dolphin and Seal were also unveiled. Among them, Yuan PLUS is expected to be released in January next year, while dolphins and seals are expected to be released in the middle and second half of next year, respectively. 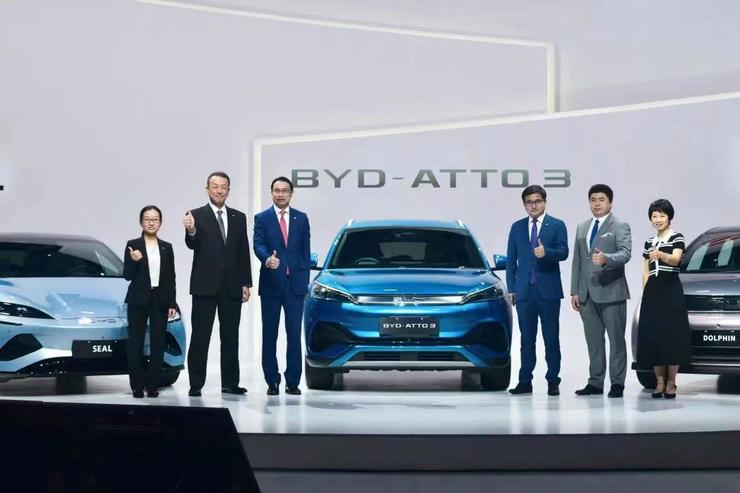 “We will provide services at prices acceptable to consumers,” said Liu Xueliang of BYD Japan, and plans to “open 100 specialty stores in 47 prefectures in Japan by 2025.”

As one of the most closed and mature automobile markets in the world, the Japanese market is notoriously easy to defend and difficult to attack. According to relevant statistics, none of the top ten car companies in the Japanese domestic market in 2021 is a foreign brand.

BYD will go out to sea to target Japan, and it should also want to seize this market depression.

In addition to Japan, Europe is also pointed to by BYD’s sword.

Yesterday, BYD announced on the social platform that it will participate in the Paris Auto Show in October this year, and bring the new energy passenger vehicle product matrix to Europe. It is expected to be released and delivered in Europe in the fourth quarter of this year.

BYD will bring Song PLUS, Yuan PLUS, Dolphin and the seal released today to Paris, and at the same time showcase its latest passenger car series products and technologies, which can be delivered as soon as the fourth quarter of this year.

As one of the world’s top five auto shows, the Paris Auto Show has a significant influence in the automotive industry. BYD’s return to the international auto show after a lapse of more than ten years also means that its speed to the sea has been further accelerated.

Knowing the difficulties and facing them, BYD is not a leader, its confidence comes from the precipitation of technology and the construction of the supply chain.

Founded in 1995, BYD started with the mobile phone battery business. At its peak, it controlled 60% of the global nickel battery and 30% of the lithium battery market share, and then entered the automotive industry through the acquisition of Qinchuan Automobile.

Taking the seal as an example, the vehicle is equipped with BYD’s self-developed blade battery, self-developed iTAC electronic control technology, and the motor is also produced by BYD itself.

According to media statistics, more than half of the 61 core components of the car can be self-supplied by BYD.

There is a supply guarantee for core components, and the self-developed and self-produced Sandian technology is the core guarantee for BYD to go overseas. From this point of view, its marine series also seems to have the deep meaning of “floating across the sea”.

BYD’s strong rise in the domestic market is undeniable, and its road to the sea may have to go through a lot of ups and downs. According to BYD’s 2021 financial report, the annual car sales have exceeded 720,000 vehicles, but only 15,363 vehicles were sold in overseas markets. 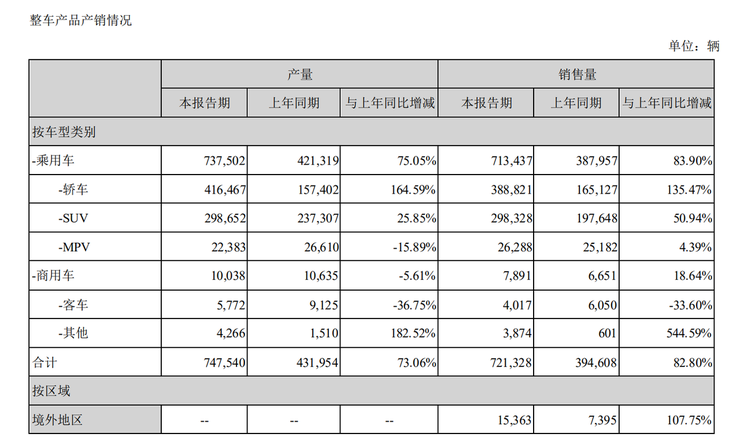 Therefore, although BYD has a long way to go to sea, the realization process cannot be accomplished overnight. The road is long and it still takes time to continue to explore.

Throughout the history of automobile development in the world, fuel vehicles powered by internal combustion engines were born in Germany, flourished in Europe and the United States, and flourished in Japan and South Korea. The pattern of the world automobile market is also basically established in this process.

Due to the late start of my country’s auto industry, no world-class fuel vehicle giants have emerged.

In this century, with the emergence and gradual penetration of electric vehicles, the global auto market is no longer monolithic, and rising stars continue to challenge the dominant position of fuel vehicles with their breakthroughs in electrification and intelligence.

my country’s auto brands are also taking advantage of the trend. BYD, Geely, Great Wall, Weilai, Xiaopeng and many other auto companies are not only increasing their domestic sales, but also actively deploying overseas.

12 years ago, Wang Chuanfu said a sentence: In the future, it will not be Americans, nor Germans, but Chinese who will lead the automobile market.

Today, Chinese brands dominated by BYD are constantly striving towards this goal, and the birth of Seal also bears the mission of “one small step forward”.

In the future, we hope that the global auto market can sing a sentence:

“The car must have a road in front of the mountain, and there must be a Chinese car if there is a road.”

This article is reprinted from: https://www.leiphone.com/category/transportation/1J4Y8zXFarbkGQu4.html
This site is for inclusion only, and the copyright belongs to the original author.