Highlights at a glance:

Looking back at the first half of this year, the Hong Kong stock market had a strong start, but was under pressure again. After leading the world’s major stock markets at the beginning of the year, overseas Chinese stocks fell sharply in March. In mid-March, the Hang Seng Index once fell below the 18,500-point mark, retreating more than 27% from the year’s high. Growth stocks were more volatile in the downtrend, with the Hang Seng Index having the largest drawdown of 41.53% this year.

Below, this article will give a brief review of the specific performance of each sector of the Hong Kong stock market in the first half of this year.

1. The energy sector has enjoyed a gratifying rise, with a cumulative increase of over 49% during the year

As of June 8, the health care sector fell the most, with a drop of 21.07% during the year, and the consumer discretionary sector fell by more than 11%. 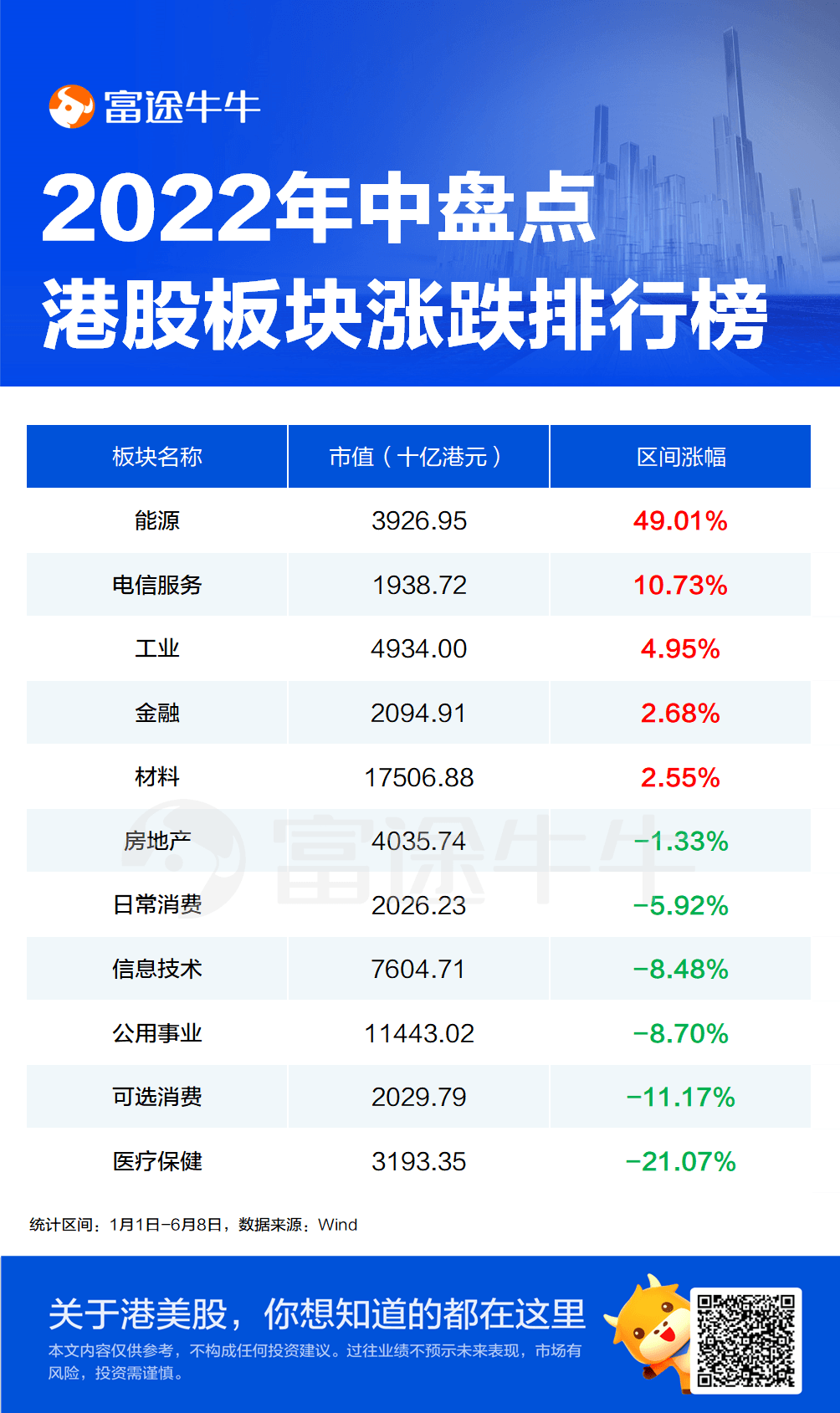 2022 may be the “year of glory” for the energy sector. Under the blessing of various factors such as rising commodity prices and continuous soaring oil and gas prices, the energy sector at home and abroad has been rushing all the way, and has continued to rise.

The performance of many energy stocks in the Hong Kong stock market is also very good. As of June 8, Yancoal Australia has soared nearly 130% during the year, and Yankuang Energy and United Energy Group have also risen by more than 85%. 2. Optional consumption and information technology sectors are the most popular, accounting for more than half of the turnover

In terms of sector turnover, discretionary consumption and information technology can be said to be the “favourite sectors” for investors, accounting for “half of the total transaction value” of Hong Kong stocks.

SPDB International said that as far as China and overseas markets are concerned, both from an absolute and relative perspective, it is worthwhile to overweight Chinese stocks. For the Chinese stock market, Hong Kong stocks are more cost-effective than A-shares.

CITIC Construction Investment said that in the first half of 2022, the Internet of China’s Hong Kong stocks will usher in a dark moment. At the current point in time, many factors that suppress the Internet are improving marginally. Overseas, the delisting risk of Chinese concept stocks has eased, and the return is still the general trend. The pace of the Fed’s interest rate hike is expected to slow down significantly in the fourth quarter. Domestically, the bottom of the policy has been clear, and the bottom of the second quarter results is imminent. In the future, domestic policy supervision will become normalized, and new model breakthroughs and technological breakthroughs will lead the new growth of the Internet industry in the next stage.

CICC published a research report saying that the overseas Chinese stock market continued to show relative resilience. Considering the already low valuation level, the continued inflow of southbound funds and the continued force of domestic policy support measures, the downside of the Hong Kong stock market may be relatively limited.

In terms of allocation recommendations, look for certainty from cash flow: focus on high dividends, high-quality growth and stable growth . CICC believes that finding certainty from stable cash flow is a better allocation idea. Specifically, on the one hand, high dividend yields (banks, energy, and utilities) provide stable dividend returns and defensiveness in an environment where risk-free rates in China may still be downside and liquidity remains loose; on the other hand, in China In the context of the improvement of domestic economic regulation on Internet platforms and the continuous efforts of policies to promote stable growth of consumption, high-quality growth stocks with sufficient valuation correction and still good growth prospects (valuation matching with growth prospects, such as automobiles, medical services, some Consumer goods services and the Internet) may provide better operating cash flow certainty.

The overseas market team of Kaiyuan Securities believes that the bottom will be reached in the second quarter, and the layout will rebound in the second half of the year. Compared with the global mainstream stock market and the historical performance of Hong Kong stocks themselves, the current valuation level of Hong Kong stocks is relatively low, and they already have medium and long-term allocation value, but the cheap valuation is not enough to constitute a reason for reversal.

The overseas market team of Kaiyuan Securities believes that profit growth is the core driving force for the long-term rise of Hong Kong stocks, but there are also unfavorable factors such as the devaluation of the RMB. More intricate factors will affect the stage performance of Hong Kong stocks, such as risk-free interest rate factors : the expected rate hike basically responds, and the shrinking balance sheet pushes the real interest rate upward; liquidity risk premium factors: Hong Kong stocks are still net inflows, and foreign capital has not yet become apparent For the return of foreign capital, it is necessary to see that the fundamental trend of Hong Kong stocks is better than that of the European and American economies; the impact of the tightening of overseas liquidity brought about by the Fed’s shrinking balance sheet; the potential impact of the delisting of Chinese concept stocks on the liquidity of Hong Kong stocks still needs continuous attention.

The U.S. stock sector performed a big inventory in the first half of the year! The brightest in these industries

This article is reprinted from: https://news.futunn.com/post/16290530?src=3&report_type=market&report_id=207772&futusource=news_headline_list
This site is for inclusion only, and the copyright belongs to the original author.