Faced with the pressure of domestic retail oil prices at historically high levels, Western countries that sanctioned Russia began to quietly change their strategies, and the focus of suppressing Russian energy turned to lowering prices.

According to CCTV, U.S. Treasury Secretary Yellen said on Tuesday that the United States intends to keep Russian oil flowing into the international market in order to curb the rise in global oil prices. But she also stressed that the U.S. goal is to limit Russia’s profit from selling oil. In this regard, the United States is “very actively” discussing relevant plans with European countries.

On Thursday, local time on the 9th, Italian Prime Minister Draghi said that the European Commission has decided to consider setting a price ceiling on natural gas imports from Russia. This can curb inflation and reduce the flow of funds into Russia. “But the matter is still under discussion and there is still a long way to go.”

Just Thursday, data from the American Automobile Association (AAA) showed that the average retail gasoline price in the United States that day reached nearly $4.97 per gallon, another record high, with the average price in all 50 states exceeding $4.4 per gallon, with California having the highest , at $6.4/gal.

The average U.S. gasoline price on Thursday even exceeded $5 a gallon by the U.S. auto price-tracking website GasBuddy, a record high for the site. It found that the average price of conventional gasoline in 17 states has exceeded $5.

Patrick De Haan, director of petroleum analysis at GasBuddy, noted Wednesday that gasoline prices have hit record highs for 10 straight days, and Americans are now spending an average of $700 million a day more on gasoline than they did a year ago.

The previous day and on Wednesday, the Royal Automobile Club (RAC), the UK’s oldest auto industry service organization, announced that on Tuesday, the average price of petrol in the UK recorded the largest single-day increase in 17 years, up 2.23 pence per day. liter, rose to 180.73 pence per liter, or nearly 1.81 pounds per liter, or about $2.27 per liter, equivalent to $8.6 per gallon in the United States.

RAC spokesman Simon Williams commented at the time that the acceleration in fuel costs was “unprecedented”, noting that prices appeared “still some distance from peak”. 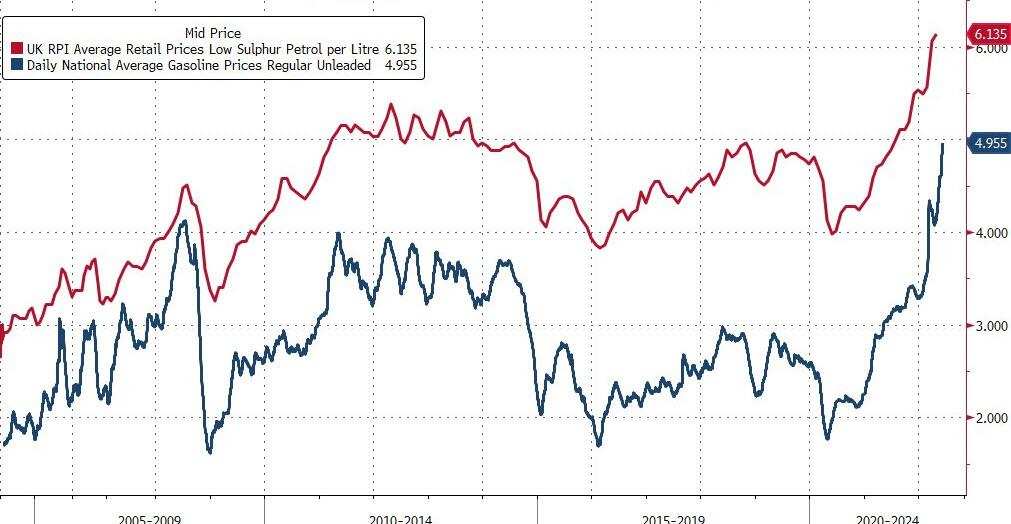 This article is reprinted from: https://news.futunn.com/post/16316478?src=3&report_type=market&report_id=207831&futusource=news_headline_list
This site is for inclusion only, and the copyright belongs to the original author.