Primary and secondary schools all over the world seem to be facing the same problem – more female teachers and fewer male teachers .

With the development of our country in recent years, since 2018, female teachers have also accounted for half of the university, not to mention the primary and secondary schools.

Female teachers account for a large proportion, and importantly, from a trend point of view, they are still becoming more and more . 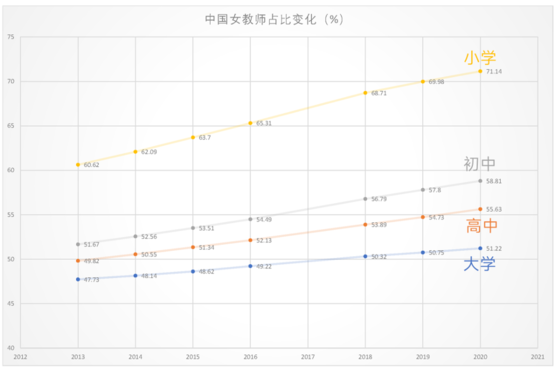 Similar changes are taking place in other countries.

In the United States, for example, the proportion of female teachers in schools has been rising slowly over the past 40 years. 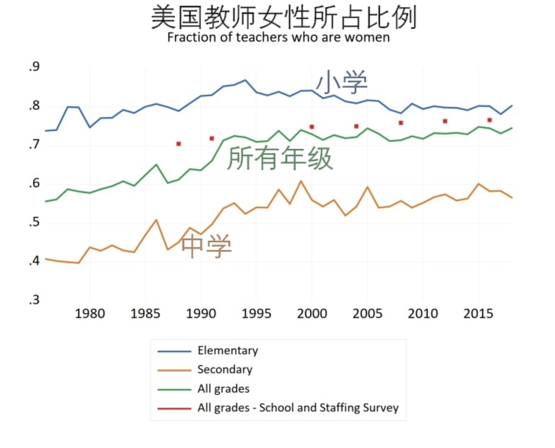 The change in the proportion of female teachers in the United States from 1975 to 2015, the green line is the female teachers among all primary and secondary school teachers, and a rising trend can be seen | The Current Population Survey via IPUMS USA, University of Minnesota, www.ipums.org. The National Center for Education Statistics’ Schools and Staffing Survey via The Department of Education.

According to a 2018 study by the University of Pennsylvania [2] , the proportion of female teachers in the United States has reached 76% .

What impact does the high proportion of female teachers have on teaching quality? Should grades be dropped for men to promote gender balance in teachers?

Does the number of female teachers affect the quality of teaching?

In 2018, some educational researchers analyzed this problem [3] and came to the conclusion that——

①Although the proportion of female teachers has increased, the academic performance of boys has not deteriorated because of this.

According to the National Assessment of Educational Progress (NAEP) data in the United States in 2018, in the fourth and second grades, boys scored slightly higher than girls in math and lower than girls in reading. However, the difference in reading achievement between boys and girls has actually narrowed since the 1990s.

Taken together, the share of female teachers in the U.S. has gradually risen in recent decades, while the academic performance of both boys and girls has actually risen .

Let’s look at the quality of teaching in my country. Taking the results of the Program for International Student Assessment (PISA) as an example, in 2015, students from four provinces and cities in my country (Beijing, Shanghai, Jiangsu, Zhejiang) ranked 7th in mathematics and 10th in science. , ranked 27th in reading.

In 2018, students from these four provinces and cities reached the top in all three areas of reading, mathematics and science, ranking first in the world.

Students from Beijing, Shanghai, Jiangsu and Zhejiang provinces and cities all topped the world in reading, mathematics and science, ranking first in the world｜OECD PISA 2018 data

The proportion of female teachers is increasing, and the overall teaching level of teachers is also constantly improving.

Taking the “2020 National Compulsory Education Quality Monitoring – Scientific Learning Quality Monitoring Results Report” issued by the Ministry of Education as an example, in this report, it is clearly pointed out that “the fourth grade science teachers have a high or high level of inquiry teaching”. The proportion of teachers … increased by 15.4 percentage points compared with 2017; the proportion of teachers with high or high inquiry teaching level in the eighth grade physics, biology and geography … increased by 19.8, 24.2 and 22.0 percentage points respectively compared with 2017.” 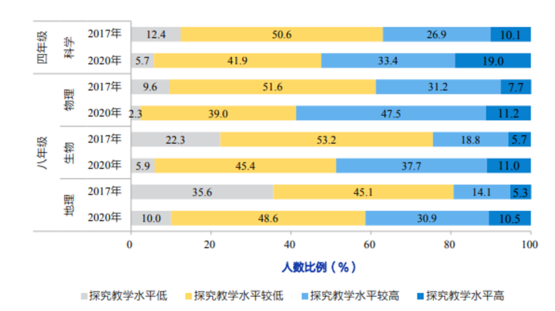 There is insufficient evidence that an increase in the proportion of female teachers reduces the quality of teaching or puts boys in a disadvantageous academic environment.

② Male teachers may not be able to teach male students well.

An American study [6] in 2007 concluded that if teachers were of the same sex as students, children would do better. Teachers of the opposite sex will drop 0.042 standard deviations in students’ homework grades. If a male teacher is used to teach Chinese in the middle school for a year, the Chinese grades of male students will improve, and the Chinese grades of female students will decline. In the end, the leading advantage of female students in Chinese will be 2/3 of the current advantage.

However, there are many studies opposing this conclusion.

A German study in 2011 showed that [7] neither boys nor girls benefited significantly from “the teacher is of the same gender as themselves” .

The study even found a slightly less statistically significant disadvantage—boys got lower grades from male teachers than from female teachers. This may be because male teachers are more rigorously graded. 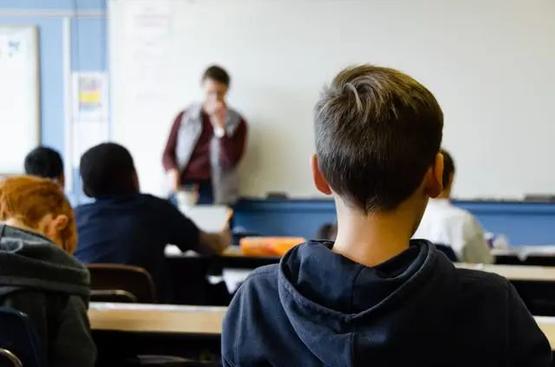 If you do not consider whether the ability is competent or not, blindly increasing male teachers may harm the education of boys and girls.

The idea that there needs to be male teachers in schools in order for boys to have role models to follow is essentially the same-sex hypothesis.

This hypothesis states that children observe, identify, and imitate adults of the same gender.

However, the 2011 German study also mentioned that it did not find a significant “gender identity effect” on academic performance . Boys don’t have to have male teachers to read well.

What’s more, if it is a male teacher admitted with a reduced score, is it really enough to be a “role model”? 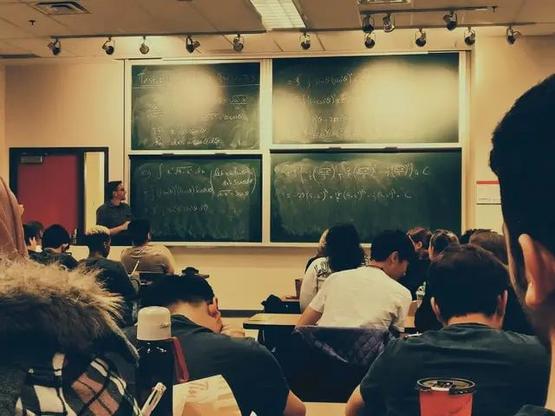 Another concern is whether female teachers have some “stereotype threat” towards male students.

The so-called ” prejudice threat ” means that adults preconceived that students must not be able to learn a certain subject because of their own prejudice or stereotype. Adults show this prejudice, and children are negatively affected by this prejudice, lose confidence in themselves, and as a result really affect their performance in this subject.

For example, if teachers think girls are bad at math, maybe that bias will make girls bad at math. If teachers feel that boys are not good at learning the language, this stereotype may also make boys’ language worse.

A classic study that has been cited 5,112 times shows [10] that if girls are told before a difficult math test that boys perform better on this test, girls will score lower on subsequent tests. However, if girls were told in advance that the test showed no difference between men and women, the girls scored significantly higher on subsequent tests.

The findings in this regard are conflicting. 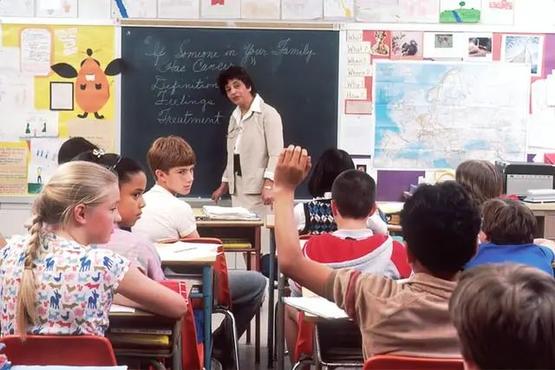 A 2014 American study showed [13] that both male and female teachers had no significant prejudice against boys, but both underestimated girls’ math ability , which was only possible when girls worked harder, were eager to learn, and performed better. Received a fairer assessment of mathematical ability and was assessed as “equivalent to boys of the same level”. Moreover, the prejudice of female teachers against girls is even more pronounced than that of male teachers.

①Women’s education level has risen, but women’s employment preferences have not changed.

A 2009 study that surveyed 44 countries and regions [14] showed that regardless of the country, men are over-concentrated in mathematics, natural sciences, engineering and other fields, while women are over-concentrated in the humanities, social sciences, health care, Employment in the field of working with people. Traditionally considered “man’s occupation” and “women’s occupation” still exert a strong influence .

Teachers are a traditional “women’s profession”. Women are classified as “naturally fit to educate their children”. Historically, there have been few occupations for women, and even fewer skilled occupations like tutoring. 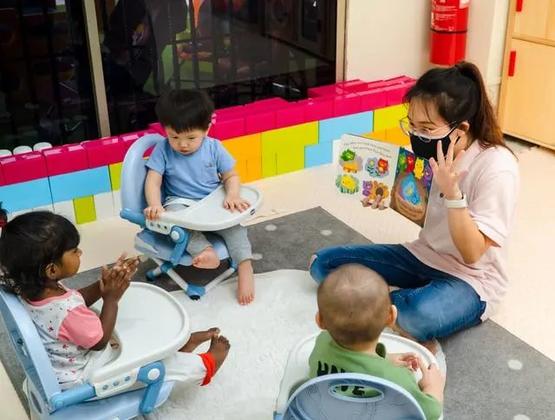 The younger the child, the heavier the “care” part of the teacher’s responsibilities, and kindergarten teachers are almost all women｜Unsplash

The substantial increase in female academic qualifications has given women the opportunity to become not only kindergarten teachers and primary school teachers, but also middle school teachers and even university teachers. This is an important reason for the rising proportion of female teachers in many countries.

In the United States, after the 1980s, the proportion of girls in colleges also exceeded that of boys. 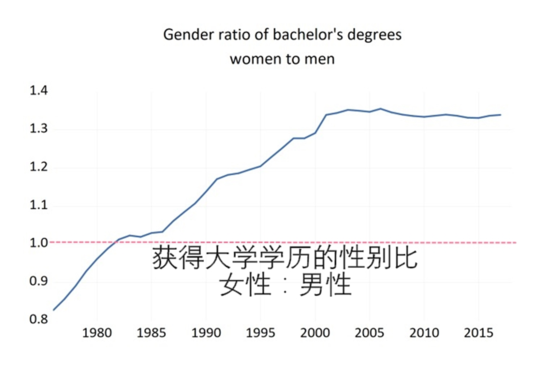 Sex ratio (female:male) of college degree recipients in the United States. Before 1980, there were more men with college degrees, but the proportion of women has increased year by year, and now it is more than 130% of men | The National Center for Education Statistics’ Schools and Staffing Survey via The Department of Education.

Women are still struggling to “balance” work and family, so working mothers are particularly attracted to careers with flexible hours and more vacation time .

In many countries, teaching is such a profession. Teachers have several holidays each year. Some countries allow teachers to work part-time, while others allow teachers not to be on campus when they are not in class. This means working mothers have a lot more flexible time, making it easier to raise their children.

Although in theory, this “flexible time, flexible location” should also appeal to working fathers. But in many countries, the responsibility for raising children still falls primarily on women . As a result, the teaching profession is far more attractive to women than to men.

③ There is relatively no gender discrimination in teacher salaries.

Most teachers teach in public schools, and their salaries have statutory standards, which are determined according to teachers’ educational qualifications, positions, experience, and abilities, and are not significantly affected by gender. In public schools, male and female teachers have basically achieved equal pay for equal work .

Since other positions in other industries basically fail to “disregard gender and pay equal pay for equal work according to position and ability”, “teacher” has naturally become an industry that is very attractive to women. 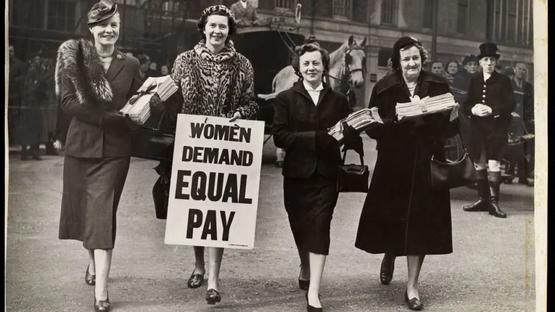 For women with the same education, they earn, on average, 3 percent more as a teacher than in other professions.

And for men, being a teacher is not so cost-effective. For men with the same education, they earn, on average, 20 percent less as a teacher than when they enter other professions.

Therefore, men often leave the teaching staff due to economic factors and pressure to support their families, and switch to other more lucrative industries.

The society’s expectations for women remain unchanged, and the “unequal pay for equal work” in other industries remains unchanged. Women will always flock to the teaching profession, which is a rational choice.

Calls for “more male teachers in the education system” are not new.

Many people are concerned about the “boy crisis” in education. Since the girls are catching up, the boys seem to be lagging behind in their studies. The final degree is also lower.

A natural thought is, are there too few male teachers in the education system?

However, this call ignores a possibility –

It’s not that boys are doing worse, but girls are doing significantly better . 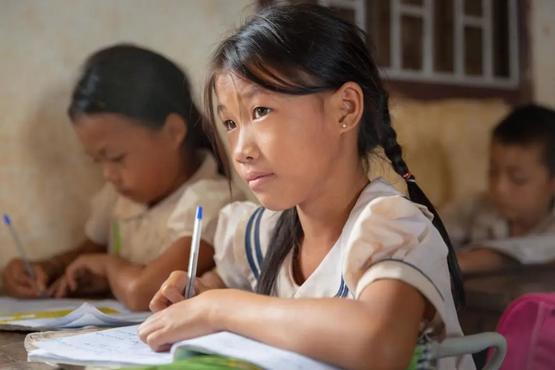 ‘Boy Crisis’, may be that girls are doing significantly better | Kelley Lynch

As long as other industries in society still receive unequal pay for equal work, as long as society still only expects women to balance family and work… the proportion of female teachers will continue to rise.

Current data shows that although the proportion of female teachers has risen, children are unlikely to be harmed by it.

But lowering the grades to enroll unqualified teachers will almost certainly harm the learning of all students . 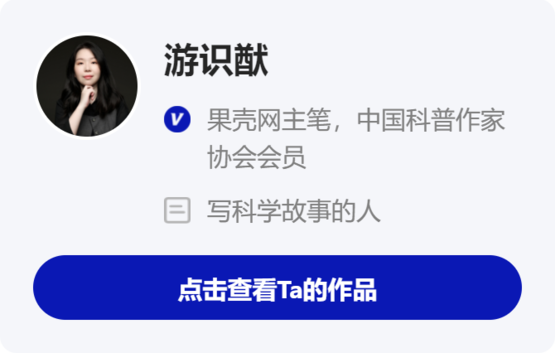 This article is reproduced from: http://www.guokr.com/article/462186/
This site is for inclusion only, and the copyright belongs to the original author.