1.1. Station B currently has about 3,000 review and customer service personnel ( I posted a post last year, this data is about 20%-30% of the total number of employees, Kuaisha may be of the same order of magnitude, the difference is whether the personnel are in vivo or outsourced, The cost should not be much different. ) During the same period, iQIYI had 5,000-6,000 employees and Youku had 2,000-3,000 employees. By contrast, the review and customer service staff at Station B were half of iQIYI’s, and about the same as Youku ( Sugarcane is not sweet at both ends, this is the pain of UGC platform…).

1.2 The number of audits and customer service will also increase as the content increases. The flexibility of this part is not as large as the revenue sharing and advertising revenue that will be mentioned below. Certain submission costs can be achieved through technical and algorithmic means, but it is hard to say to what extent.

2. According to news reports, in March, a large number of UP feedbacks from station B dropped sharply, or even cut in half, but the revenue share in a single quarter increased by 18% year-on-year ( financial report: an increase of 18% compared with the same period in 2021 ). How to understand? Has the structure of the share changed? For example, there are more people and fewer people, and it is the part that has lost a lot of expression on social media. 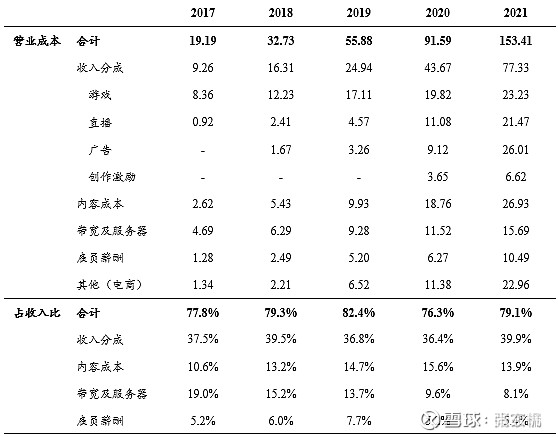 2.1 The revenue share + content cost of Bilibili in the second quarter was 2.85 billion, while the content cost of iQiyi was 3.9 billion in the same period. It can be roughly understood that the overall content-related cost of Bilibili reached 73% of iQiyi, which was unexpected. ( Note: An old brother in the comment area provided a brokerage research report data, 2.1 and 2.3 were revised to use the proportion of this data to calculate the relevant data for the second quarter of 2022, so that there is no “B station content related costs more than love The conclusion of “Fantastic Art” )

2.2 There is a certain flexibility in revenue sharing. I think there is room for downside in the future through the method of three-to-one, that is, through other strategies, UP can make more money, and then the content is divided into less money.

2.3 Content cost ( also use the proportion of the brokerage research report data mentioned in 2.1 – assuming that the proportion of content cost in the last half year has not increased further, to calculate the relevant data for the second quarter of 2022 ), that is, the part that strictly benchmarks the content cost of iQiyi , about 735 million. However, iQiyi still has 480 million income from content distribution, that is, after buying it, it will be distributed to other video websites, local TV stations and overseas content platforms. This part of Station B has not seen the relevant strategic planning and income data for the time being. Can you think about it? If according to the proportion of iQiyi, there is 100 million income, it is better than nothing, at least it will not only go out and not come in. In the long-form video platform business, whether it’s buying or self-made, I’ve always looked down on it and sings it out (I’ve written many articles about Aiyouteng before, but I didn’t expect to talk about station B today…) .

4.1 Station B still needs to develop a more efficient advertising engine. I think the skippable patch advertisements mentioned by some people have certain feasibility. It can be used in some high-quality UP masters and high-quality advertisements through indicators such as interaction rate and playback completion rate. The content is tried on a small scale, and then based on the data and feedback from other levels, it is gradually drawn. But the conference call didn’t go ahead without a word.

4.2 The vertical screen mode is more friendly to advertising. According to the conference call, this part of VV accounts for about 30 points of the growth part, which is also an elastic part, but it is also as Chen Rui said. Users “when fragmenting time… just want to spend a minute or two to pass…” This part of the content format is different from the exclusive or differentiated content that Bilibili was good at before, but it is more similar to Kuaijing Now, it’s hard to say how to make both sides go up together instead of one or the other, and even affect the tone and foundation of the original content brand.

5. I posted a post before complaining about the investment and mergers and acquisitions of Station B. I checked the data. Last year, I invested in more than 50 companies. This year, I have invested in more than a dozen companies, including 600 million acquisitions. . Should really take a look. The first is to close the money bag, the second is to reduce the impact of investment losses on financial data, and the last is to review the strategy and look at the synergy.

6. The game business has experienced considerable year-on-year and month-on-month declines. I checked that a new game was released in July (Time and Space Hunter 3), but the data was not very good. The financial report disclosed that several projects were closed in the first quarter (financial report: Terminated). Several game projects), the remaining two quarters are hard to say. I saw a data on the game market before, and the trend of the whole industry gathering towards the top is more obvious. Whether it is in terms of players, income and R&D personnel, in the second quarter of the cold winter, the top manufacturers still focus on growth, and at the same time The small factories at the waist and tail are mourning everywhere. This environment and industry trend are obviously not friendly to the game business of station B.

7. The little yellow car has finally been launched at Station B. This business is the “three mornings and four evenings” part mentioned in Article 2.2 above. Whether this part of the income is calculated in “value-added” or “e-commerce and others”, I have not figured it out, someone who knows will add it.

8. Chen Rui said that in 2024, the break-even of the Non-GAAP caliber will be achieved. Do you think there is hope?

This topic has 182 discussions in Snowball, click to view.
Snowball is an investor’s social network, and smart investors are here.
Click to download Snowball mobile client http://xueqiu.com/xz ]]>