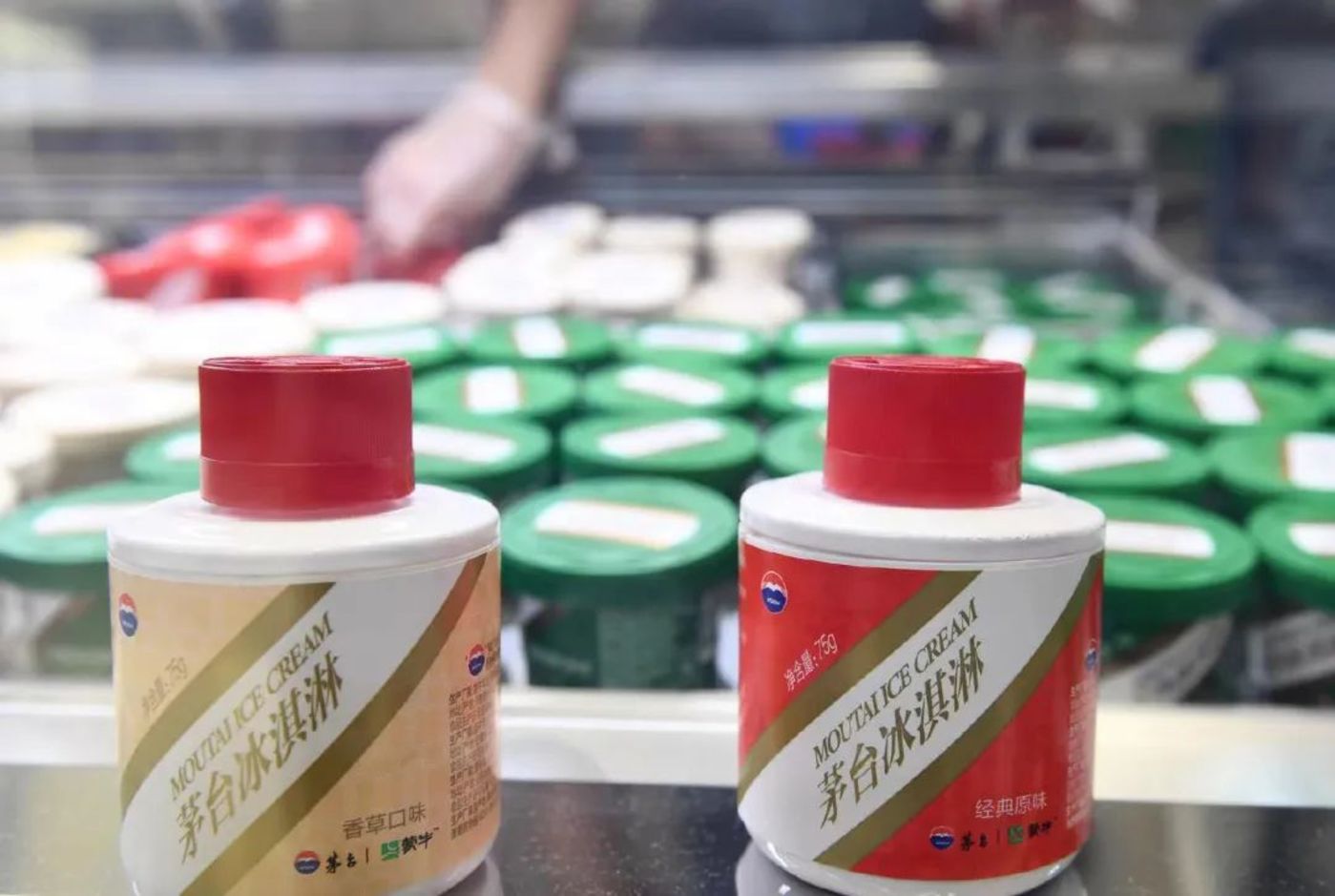 The “Digital Economy Panorama White Paper” continues to focus on new consumption areas. With the hot and dry weather, the topic of ice cream has received widespread attention recently. In the ridicule and “crusade” of “ice cream assassin” and “ice cream killer”, the high-priced Moutai ice cream became popular in a low-key manner.

Moutai ice cream, which has become popular “against the trend”, may not mean to sell ice cream for Moutai. And there are more and more brands that wantonly cross-border like Maotai. Under the impact of new consumer brands, traditional brands have also begun to focus on the development of young customers. Is the current cross-border business still good?

With the hot and dry weather, the topic of ice cream has received widespread attention recently. In the ridicule and “crusade” of “ice cream assassin” and “ice cream killer”, the high-priced Moutai ice cream became popular in a low-key manner.

On July 9th, Moutai Ice Cream opened in 5 stores in 5 cities including Hangzhou, Shenzhen, Guangzhou, Wuhan, and Changsha. At the same time, the “i Moutai” APP simultaneously opened online in parts of Guizhou, Jiangsu, Shaanxi, Hubei, Guangdong, Zhejiang, and Hunan. the way of buying.

Before the opening of these five new stores, according to media reports, Moutai ice cream, priced at 59 yuan/66 yuan, has developed a daigou business due to “regional restrictions”. Under the influence of logistics costs and other factors, the premium is the highest or even three times higher than the original price.

And Moutai comes with its own “traffic”, and the hot topic is far more than ice cream. At the end of March, when the “i Moutai” APP was launched, it also topped the App Store free list for one day, causing widespread discussion. Analysys Qianfan data shows that in May, “i Moutai” still maintained a month-on-month increase of 16.61%, ranking 10th in the monthly TOP list of Analysys Qianfan APP.

Moutai ice cream, which has become popular “against the trend”, may not mean to sell ice cream for Moutai. And there are more and more brands that wantonly cross-border like Maotai. Under the impact of new consumer brands, traditional brands have also begun to focus on the development of young customers. Is the current cross-border business still good?

On June 29, Moutai Ice Cream opened its first stores in Xi’an and Nanjing, and Moutai’s ice cream business officially expanded to the “base camp” outside Guizhou Province.

According to the news released by Moutai, on July 9, the offline stores of Moutai ice cream will be expanded to 9 cities. At the same time, the online purchase channels in the “i Moutai” APP will also be added by Guizhou, Jiangsu and Shaanxi provinces. Hubei, Guangdong, Zhejiang, parts of Hunan.

According to the introduction, Moutai ice cream currently has three flavors: classic original flavor, green plum boiled wine and vanilla, each of which is added with Maotai wine. On social platforms, netizens have posted Moutai ice cream tasting experience before, and many netizens said that they were “unexpectedly delicious”, “you can taste the mellow aroma of the wine in your mouth, the milk taste is rich and not sweet”, “you will leave a gap between your lips and teeth after eating.” Fresh wine aroma”. Some netizens also said that although they do not drink liquor, they can still accept the taste of Moutai ice cream.

Before this round of large-scale store expansion, Maotai has tested ice cream products many times. According to media reports, in 2019, Moutai opened its first national Moutai ice cream store in Tianjin. The products include 6 types of wine-flavored ice cream, including phoenix-flavored, light-flavored, strong-flavored, cabernet sauvignon, and sweet white wine. In May 2022, Moutai and Mengniu signed a strategic cooperation framework agreement to carry out in-depth cooperation in the field of ice cream and other pre-packaged products, and then launched this round of popular Moutai ice cream products.

Previously, Moutai also launched the “i Moutai” APP to restart direct e-commerce channels, and launched a 100ml “mini Feitian”… It can be said that Moutai has placed its emphasis on young customers on the table.

From the data point of view, Moutai’s young customer group “competition” seems to be very effective.

At that time, the “i Moutai” APP was still in the trial operation stage, and its core function was to purchase Moutai liquor. Kweichow Moutai ‘s official Weibo shows that from 9:00 to 10:00 on March 31, more than 2.29 million people and 6.22 million people poured into “i Moutai” within an hour to participate in the purchase of Moutai liquor on the platform.

At present, in addition to the purchase of alcohol products, the “i Moutai” APP has also added the Moutai ice cream purchase channel and related content promotion. In addition to product sales, “i Moutai” also carries out product and brand culture related promotional content in a prominent position. 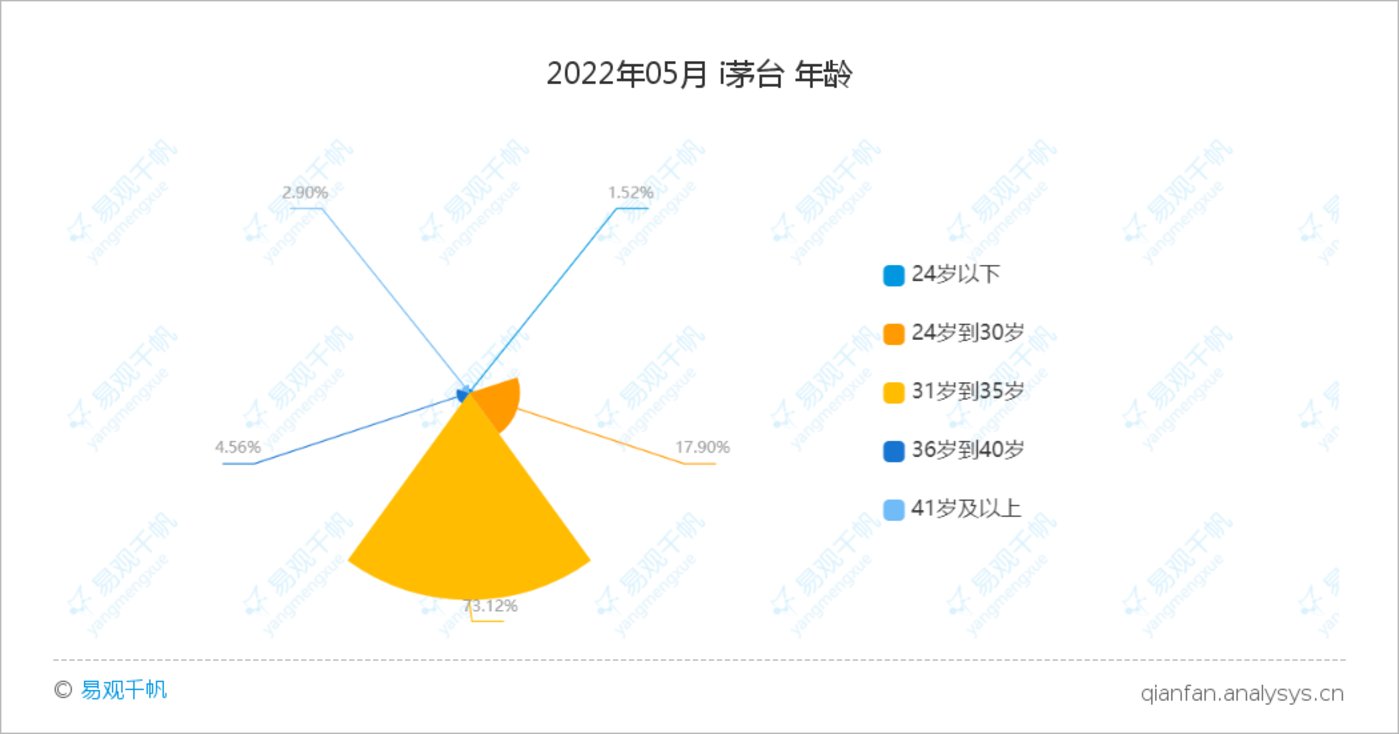 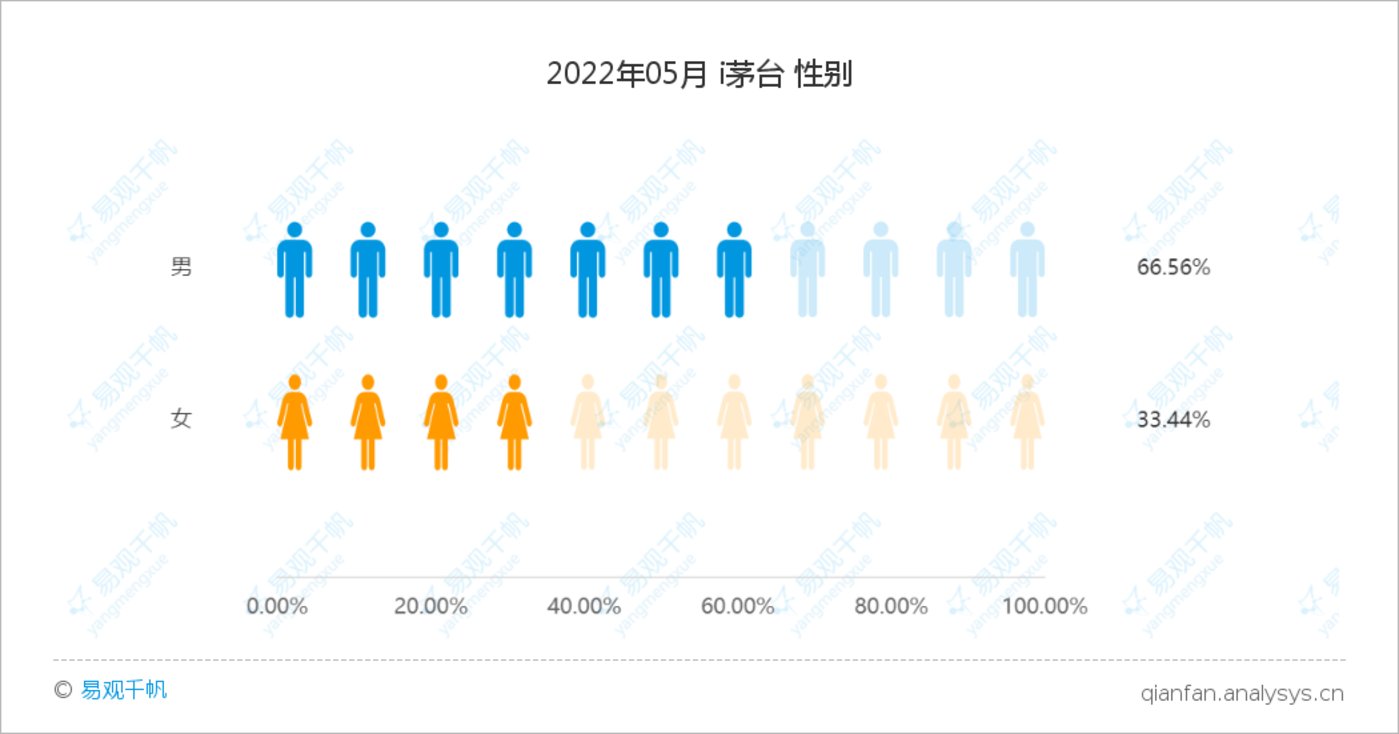 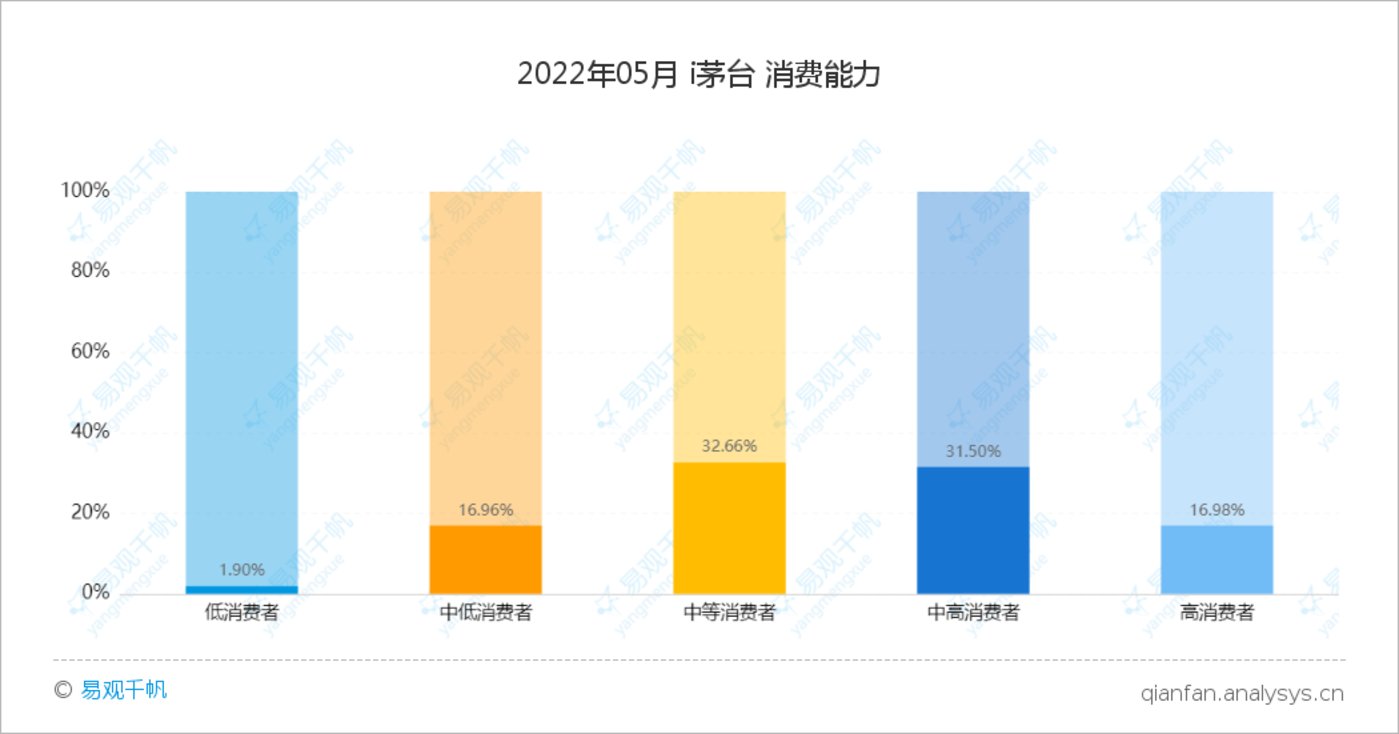 From the perspective of city distribution, users are concentrated in new first-tier cities and second-tier cities. 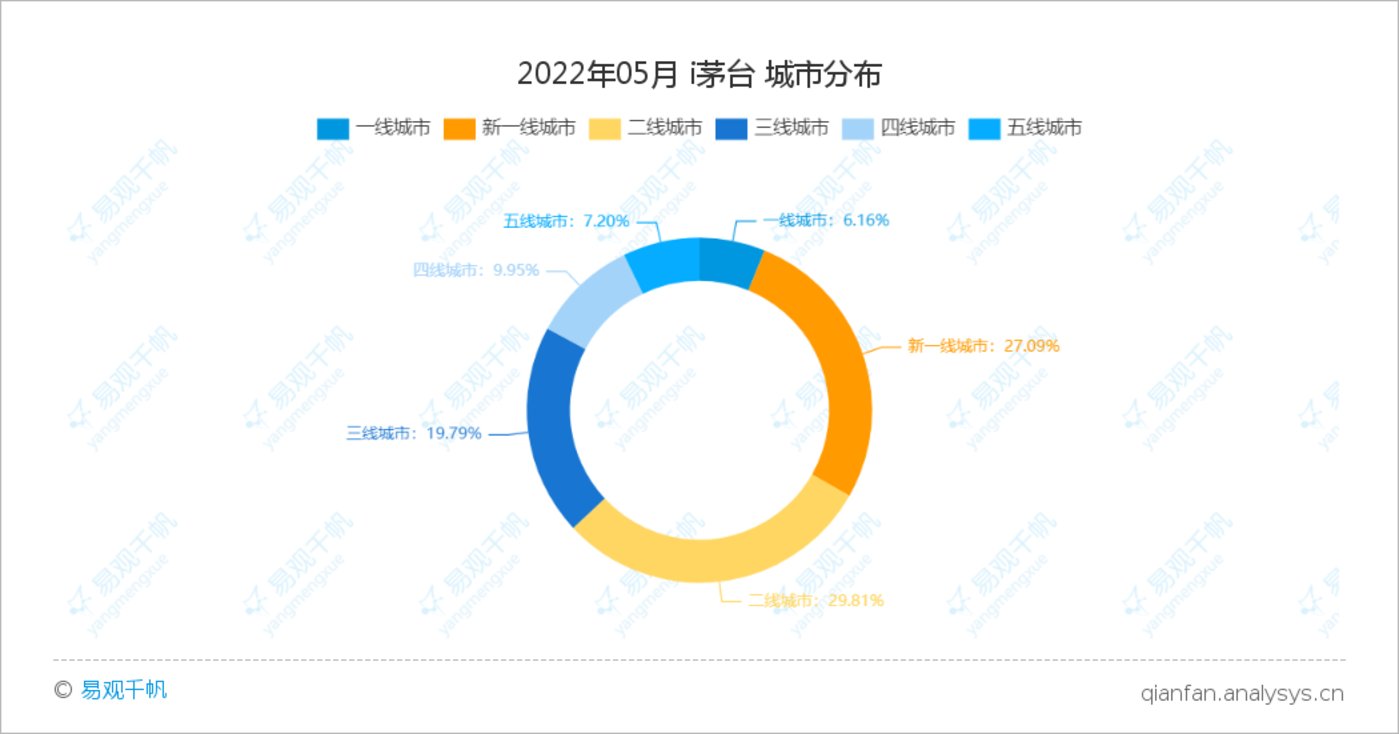 Compared with the data at the end of March, the data in May shows that the “i Moutai” APP users have a clear trend of younger users. Although male users are still the main customer group, the proportion of female users has also increased significantly.

There are more and more brands trying to cross-border like Moutai. Just like Maotai, the main purpose of many brands’ crossover is not the sales of these crossover products.

In addition to Maotai, many brands have tried similar crossovers before, such as Wuliangye and Heytea launched ice cream, and Luzhou Laojiao jointly launched Zhongxue Cake to launch “fragmented ice cream”. In addition to ice cream, coffee has also become a “cross-border single product” that brands are keen on. China Post and Li Ning have previously announced their entry into coffee, and Huawei has also applied for the registration of coffee-related trademarks. For a while, coffee, the trillion-dollar track, has high hopes.

For these brands, how much money cross-border business makes and whether it can become a “second growth curve” may not be the main issue. The more important purpose is how to create a more “people-friendly” image and establish a connection with the customer group (such as young people) that it expects to tap. The building and marketing of the brand image is the main purpose behind these huge crossovers.

Compared with the prices of the main products of these brands, coffee, ice cream, tea and other products with relatively low prices have become a way to establish a connection with consumers with a low threshold. When Maotai hopes to let young people drink the “first mouthful of Maotai” in the name of ice cream, Li Ning and Huawei may also hope to deeply bind coffee, a product that is highly accepted by young customers and even regarded as “necessities”. Certainly. At least judging from the “i Moutai” data presented in Analysys Qianfan, Moutai has touched the hearts of some young people through a series of operations such as cross-border co-branding.

And these cross-border gameplays have long been the “used tricks” of luxury brands with strong brands. Tiffany will open the first Tiffany The Blue Box Cafe in China in 2019, LV will cooperate with MANNER Coffee to create a pop-up store in 2021, and PRADA has even created a fireworks-filled vegetable market in Shanghai. Luxury goods take the initiative to cater to young people for marketing, and take advantage of the opportunity to become popular on social platforms, which once became a shortcut for brand rejuvenation transformation and cultivating potential customer groups.

But cross-border explosion, and then?

Young new consumer groups have stronger national self-confidence, are keen on fresh gameplay, and are more willing to pay for their own pleasure and “emotions”. There will be the top moments of “wolf consumption”, and there will also be collective “crusades” of bitter “assassins” for a long time.

Traditional brands can rely on fresh gameplay in the Internet era to “overtake on curves”, and new consumer brands that take the lead may also “roll over” or even undergo shuffling at some point. After the tide of marketing recedes, the pursuit of product power and the building of brand power may be the way for a brand to survive for a long time.

This article is reprinted from: https://readhub.cn/topic/8hRFqNGIRdI
This site is for inclusion only, and the copyright belongs to the original author.