Fine chemicals and new materials are particularly eye-catching. In the case of a 33% increase in sales, revenue increased by 58%, and it is clear that both volume and price have risen. After 5 or 6 years of accumulation, new materials have reached a point where they continue to contribute to performance. The splendid performance of new materials in the first half of the year may be largely due to the fact that lithium battery cathode materials and degradable PBAT plastics, which were put into production at the end of last year, began to release production capacity and contribute to performance. The mid-year report emphasized the achievements of the new materials sector: “ADI and special amine businesses actively explore overseas markets, keep an eye on the orders of major international customers, and tap the potential of the American market; Wanhua Chemical’s high-end silicon copolymer PC project has been put into production smoothly” mentioned ADI, special amine, high-end silicon copolymer PC. These are all products that Wanhua has been working on for many years. It is time for new materials to bloom and continue to produce surprises. 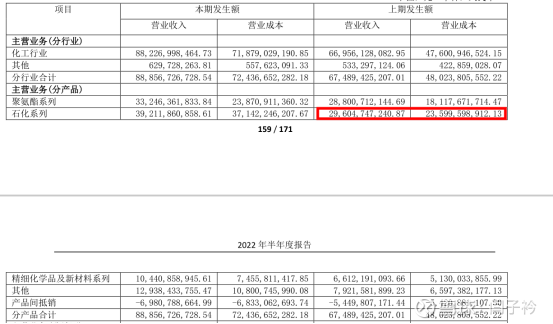 There is no problem on the income and price side, but the problem in this interim report is on the cost and profit side. “The international environment became more complex and severe in the first half of the year, and the conflict between Russia and Ukraine at the end of February caused a sharp rise in global energy prices.” “The average price of pure benzene was 8,461 yuan/ton, up 30.15% year-on-year. The average price of 5,000 kcal coal was 1,090 yuan/ton, up year-on-year. 52.23%. CP propane is $825/ton, up 47.10% year-on-year; the average price of CP butane is $829/ton, up 53.55% year-on-year.” In the case of soaring raw material costs, the end price of products is firm at a high level, and it is no longer possible to Digestion of rising costs, profitability is greatly damaged. For the purpose of the polyurethane segment, the gross profit margin in the first half of the year fell to 28.2%, the lowest value in recent years. Even lower than the 2020 outbreak, crude oil fell below 20 35% of the same period in 2020.

From the perspective of profitability, this is undoubtedly another downward cycle. However, this cycle is significantly different from the previous down cycle. The usual down cycle is a sharp drop in product prices caused by sluggish demand, which affects profitability. This time, due to geopolitical factors, the cost of energy has skyrocketed. Product prices have lost the ability to pass on costs. Although product prices are at a high level, relative to the sharp rise in raw material costs, product prices cannot rise proportionally, which is equivalent to a sharp drop in prices. On the other hand, the rising cost has restrained the demand for chemical products as a whole, and recently restrained the price of downstream products. It is this complex and extremely special reason that has created the current situation. This is not a typical downward cycle, and it is difficult to predict how it will evolve in the future. Abnormally high oil prices are short-term factors, and it is unrealistic to maintain high prices for chemical products. The impact on profitability is complicated. How cost factors and price factors evolve together determine the level of profitability. The influence of geopolitics on energy prices will gradually weaken, and the gradual decline of product prices is also a high probability. But I think that the price reduction of the cost of raw materials will be much greater than the price of products. In other words, this half-year is the low-value stage of Wanhua on the profit side. In a bad year, it is difficult for Wanhua’s net profit to be less than 20 billion. And the 25 billion that exploded last year, now it seems that it is only a passing line. As long as the form is slightly improved, Wanhua’s profitability will be improved to a higher level.

The secret of this is that a steady stream of new production capacity begins to contribute to performance, which can largely offset the adverse effects of costs and profitability. Wanhua is offsetting cyclical fluctuations with certain growth. In the new material segment of the mid-term report, due to the production of lithium battery cathode materials and degradable PBAT plastics, the performance increased immediately. As a result, the fine chemicals and new materials segment of the mid-year report contributed a gross profit of 3 billion, accounting for 18.3% of the total gross profit of 16.4 billion, which changed the previous impression of 10% of the revenue and 10% of the gross profit of the fine chemicals and new materials segment. Correspondingly, the contribution of the gross profit of the polyurethane segment dropped to 57%, and Wanhua’s dependence on MDI for polyurethane became less and less. In addition, there is a puzzling point in this interim report. After changing the caliber, it is divided into other categories according to the product classification. The scale is not small, exceeding the entire fine chemicals and new materials sectors. The revenue of the mid-year report is 12.9 billion, and the gross profit is 2.1 billion, which is a component that cannot be ignored. But what exactly is this part? At present, it is still my unsolved mystery, which needs to be further explored. Please also ask people of insight to answer your questions.

This interim report, in sharp contrast to the sluggish profit side, is cash flow. The operating cash flow is 14.3 billion yuan, and the operating hematopoietic capacity is strong. The purchase and construction of long-term assets and the extension of mergers and acquisitions pay 13.73 billion yuan in cash. The rhythm of investment is highly synchronized with the operating hematopoietic capacity. Interest-bearing liabilities did not continue to expand. In other words, in the first half of the year, Wanhua used the money earned from operations to expand, and borrowed new debts to repay old debts. The overall debt interest rate was very low, not exceeding 3% in the short-term and up to 3.54% in the long-term. The basic situation of debt financing instruments, the interest rate of ultra-short-term and medium-term debt is between 2.02-2.6%, such a low cost of debt, borrowing new debt to repay old debt, and controlling the overall debt level, there is no debt risk. Among all the interest-bearing liabilities, the short-term debt is 51 billion yuan, the long-term debt due within one year is 3 billion yuan, the short-term debt is 15.6 billion yuan, the long-term debt is 18.3 billion yuan, and the long-term debt is 200 million yuan. The total scale of interest-bearing debt is 881. In the first half of the year, the interest expense was less than 1.25 billion yuan. Based on this, Wanhua’s comprehensive interest-bearing debt cost was below 2.84%. (12.5*2/880) Therefore, to control the overall debt level, and under the guarantee of excellent management and hematopoietic capabilities, borrowing money for expansion is not a matter of borrowing for nothing. Even if Wanhua holds the 88 billion in its hands to earn interest and does nothing, it will still make a steady profit. What’s more, Wanhua invests in projects with high return on capital.

In general, this mid-term report gives me the feeling that there are no surprises and no surprises, it is quite satisfactory, it seems to be a matter of course, but I inadvertently give a thumbs up somewhere. This is an unusually down-to-earth feeling.

2022 is a small year for Wanhua to put new projects into operation, and the new capacity will not be much. However, Wanhua’s various projects were carried out step by step, laying a solid foundation for Wanhua’s take-off in the Ming and later years. In terms of new production capacity, nylon 12 and citral are likely to land this year. The statement in the mid-term newspaper is: “Actively promote the industrialization of nylon 12, flavors and fragrances and other emerging businesses”, “Complete the completion and operation of nylon 12 and bisphenol A projects as soon as possible” In addition, the description of the expansion of MDI is: ” In the second half of the year, we will focus on superior scientific research resources to ensure the smooth commissioning of MDI plants in Fujian, and support the expansion and upgrading of MDI in Ningbo, BC and other parks.” Combined with the completion progress of important projects under construction, 75% of Ningbo’s technological transformation has been completed, and BC’s technological transformation has been completed66 % judged that the new MDI production capacity that will land at the end of the year may reach more than 800,000 tons, which will provide a huge increase in performance for next year.

This interim report also officially “officially announced” POE for the first time, neither mentioning the past that the approval was blocked, nor did it say that it had been reviewed. It’s just an understatement to “promote the transformation of the results of neck-stuck materials such as nylon 12 and POE”. In Wanhua’s eyes, POE may be just one of many new projects, and no special attention has been given to POE. Letters and disclosures have always adhered to the principle of non-mandatory not to say much. Therefore, there is little reflection on the bumpy market of POE in the past two years. However, POE is of unusual significance to Wanhua. Only high-end polyolefins can become Wanhua’s true second curve. POE is the pioneering work of Wanhua’s high-end polyolefins, and its importance is self-evident. After the trial, Wanhua will make every effort to promote the industrialization of POE, and Wanhua’s road to high-end polyolefins has officially opened. There is an ambiguous sentence in the mid-year report: “A variety of new high-value-added polyolefin products are launched.” The high-value-added polyolefins here are not related to POE, but it is certain that the C2 petrochemical chain will be extended to high-end polyolefins. , has always been what Wanhua has been doing.

Waiting for the next year and the year after, Wanhua’s performance will explode, and Wanhua will go to the next level in an all-round way. What kind of evaluation will the market give?

There are 11 discussions on this topic in Snowball, click to view.
Snowball is an investor’s social network, and smart investors are here.
Click to download Snowball mobile client http://xueqiu.com/xz ]]>