Last year, I downloaded photos from a third-party cloud disk to the local iPhone, because sometimes it is very slow to find photos in the cloud disk because of the poor network, and whether it is reading notes, clipped articles or photos, now I tend to organize lightly and try to use Search instead of a lot of manual sorting work. Just after I downloaded the photos to the local, ios15 has the “live text” function, and I have to say that I saved a lot of trouble. Briefly tell me about my situation: there are nearly 40,000 photos on the mobile phone. The main requirement is to find the life photos of a certain period or the pictures of a specific person or thing by time. Although there are some good-looking illustrations, there is no need for professional material management. .

How do I organize and find photos?

One day, a netizen on Weibo wanted my wallpaper. I directly searched for the keyword “heartbeat together” and found the picture I wanted in a second. There are also some intelligent keywords to identify objects, such as searching for “cat” to find pictures containing cats, similar keywords and food, etc. In the past, I would create a separate photo album for the food I photographed, but now I don’t need to manually organize it.

Price: The download is free, and some functions require the purchase of a paid package. At that time, the time of some old photos I downloaded from the cloud disk was messed up. I wanted to use it to adjust the time of the photos in batches, and I directly chose 30 yuan to buy it out. The advantages of HashPhotos are:

This is my favorite feature on hashPhotos. There is a date grid between the photos in the list view. After clicking, you can add a keyword to the day and it will appear on the timeline. Suppose you want to find a picture of which you know the approximate date, such as photos of you traveling to a certain place. The previous practice was to add an album to these photos, but after a long time, there will be a bunch of albums, which is very slow to turn over. And if it’s not an activity like traveling that will take a lot of photos, just hang out with friends, it’s not necessary to build a special album for a few photos. 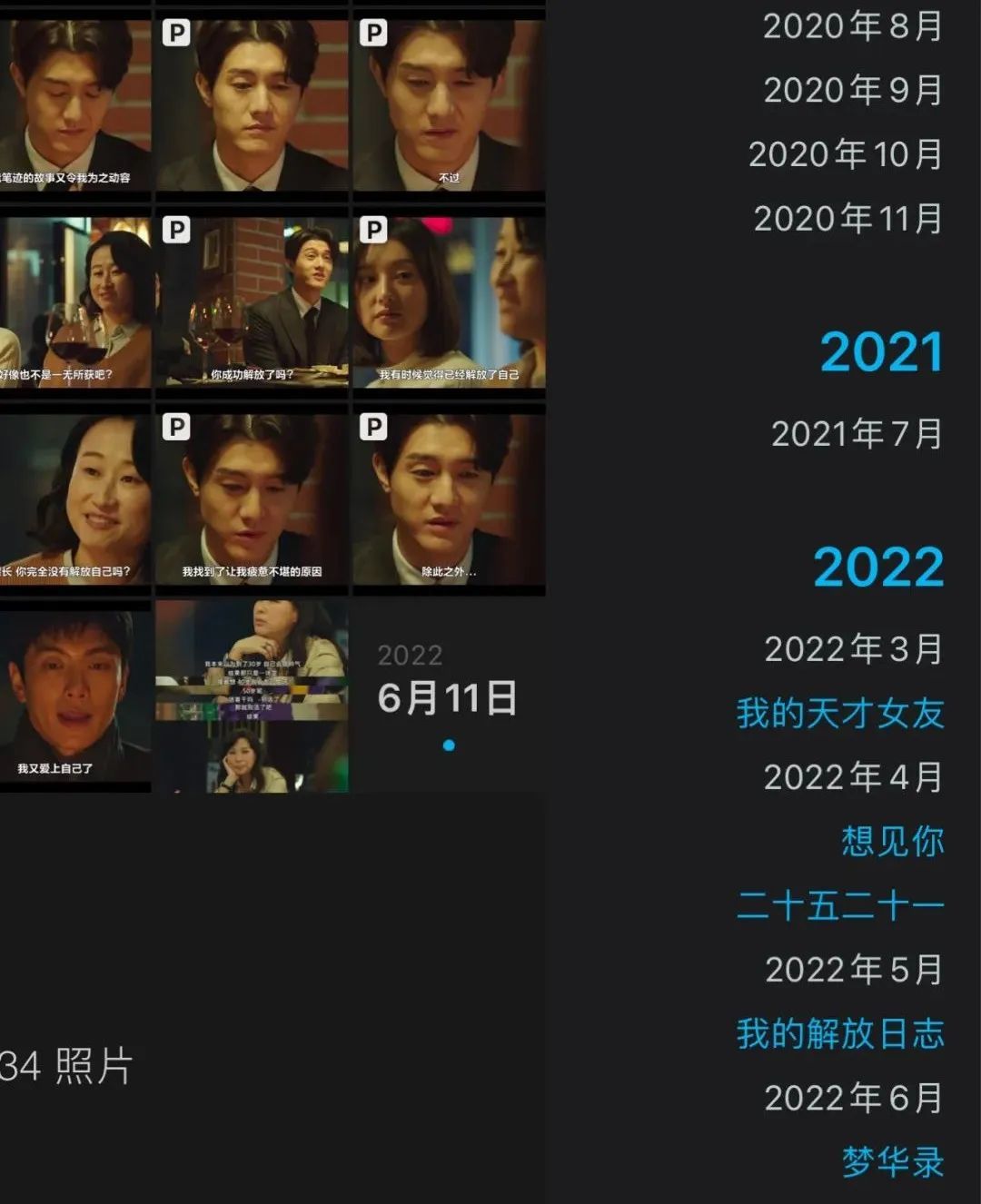 After I start using HashPhotos, I will mark some dates for outings with the theme of the event, such as “2022 May 1 Shenzhen”, and I can clearly see what memories I have in recent years on the timeline, which is very satisfying and satisfying. sense of ceremony. Sometimes when watching a TV series and encountering a scene or line that I like, I will also mark the title of the play on the date of the screenshot.

After downloading all the photos from the third-party cloud disk, some photos have been backed up before and have not been deleted locally, resulting in a large number of duplicate photos on the mobile phone. HashPhotos has the function of deleting duplicate and similar photos, and can compare some sizes, time, etc. at the same time. parameters, choose the best to stay. There are many software to delete duplicate photos, such as Gemini photos (with trial period), subtraction photo album (paid for deduplication function), and some cloud photo album software Tencent Photo Album Manager, Moment Photo Album, HashPhotos This function is free. If you have the same need to delete a large number of duplicate pictures like me, you can download them all and clean them up, because the duplicate checking algorithm and accuracy of each software are not the same.

In addition, I have another method to check the duplicates: using ios face recognition. Sometimes pictures of favorite stars are saved on the mobile phone, and it is inevitable that there will be duplicates over time. It is easy to see which duplicates are repeated by looking at the photos by their faces.

I have always disliked the photo album that comes with ios. The cover is too large, resulting in a small number of people that can be viewed on one screen, and flipping pages horizontally is quite anti-human. HashPhotos Swipe left to see all albums, very clear. By tagging and writing a memo to a single photo, you can also create a smart album filtered by various conditions. However, since I used the Timeline, I almost never deliberately classify photos. These methods are used less often. , ios comes with you can also write notes, it is more convenient to use global search, and sometimes you can accidentally search for forgotten photos.

After cleaning with HashPhotos, it is routine maintenance. I usually use Slidebox to delete daily useless photos. Some people may wonder if they need to download a special app to delete photos? As long as you use it, you will find that the operation is much smoother than the self-contained photo album. Every time you delete a photo in the self-contained photo album, you need to confirm the deletion. 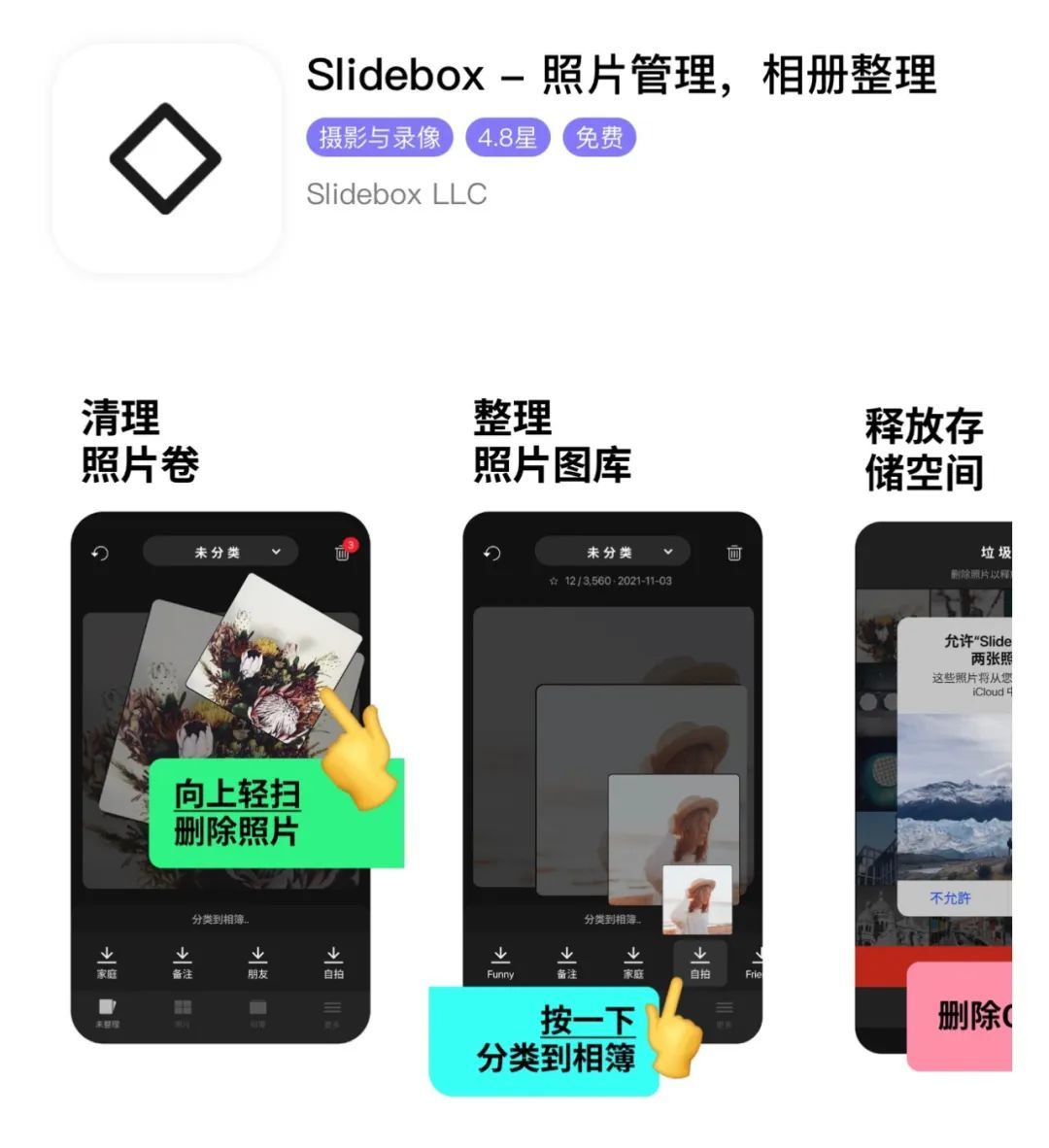 To use Slidebox, you only need to use the gesture of sliding up and down. For people like me who like to take screenshots and take pictures, now I am used to opening Slidebox on the way to and from get off work to delete pictures that do not need to be saved recently, and often delete dozens of pictures. , very decompressing and fulfilling. When the deletion is almost done, click the button in the upper right corner to delete the local picture synchronously.

The above is my photo organization process, welcome to share your methods and ideas in the comments

This article is reproduced from: https://sspai.com/post/73910
This site is for inclusion only, and the copyright belongs to the original author.