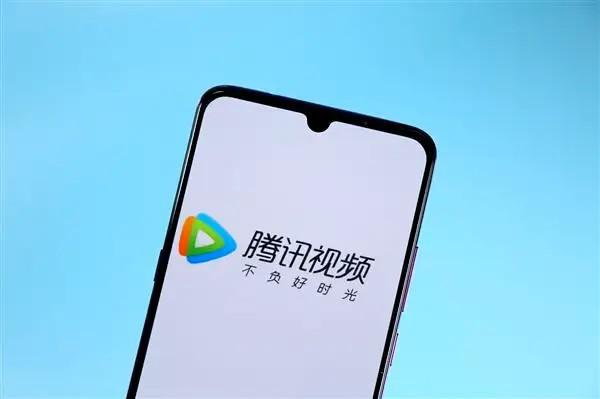 After “Menghualu” was urged all the way from the beginning to the end, the audience quickly transferred their enthusiasm to “Xinghan Brilliant Moon Rising Canghai”.

The professional version of Maoyan shows that “Xinghan Splendid Moon Rising to the Sea” has won the most popular online drama of Maoyan for 15 consecutive days. Since its launch, there have been at least 15 hot search topics and a maximum of more than 120 topics on the online list in a single day. On the other hand, as of press time, the Douban reputation of the show remained stable at 7.5 points, with more than 230,000 ratings.

The drama section is hot after another, but the user data of Tencent Video goes against the trend and further enters the cold winter.

Tencent Holdings just released the 2022 Q2 financial report, showing that the number of Tencent Video paid members showed a negative growth month-on-month and year-on-year, compared with the loss of 2 million in Q1 and 3 million in the same period in 2021.

During the period from Q1 in 2020 to Q4 in 2021, although the quarter-on-quarter growth rate of Tencent Video’s quarterly paying users continued to be weak, and even experienced a negative growth of 3.88% in Q4 in 2021, the year-on-year latitude has always been upward. Until this year, not only has there been a year-on-year decline, but the decline has continued to expand. 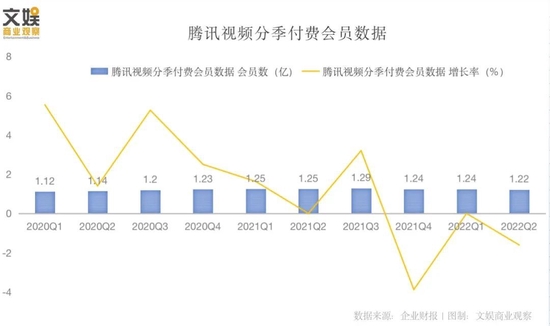 Since Q2 of 2020, Tencent Video has maintained the No. 1 advantage in the long video industry in terms of user scale for 9 consecutive quarters. However, although the pond is large, its “living water” reserves do not have an absolute advantage.

This is not the most important thing.

According to QuestMobile data, as of June 2022, iQiyi has a slight advantage over Tencent Video in terms of penetration of users under the age of 24.

It is an indisputable fact that the traffic growth in the pan-entertainment field has gradually bottomed out. Based on this, the future growth of the long video industry will no longer depend on the number of users, but will increase the willingness of users to pay on the basis of maintaining the existing user volume. . On the other hand, with the transformation of social roles, Generation Z has gradually become a group that is talked about by the current consumer market.

In short, in the stock market operation of long videos, Generation Z has an unparalleled driving force.

It is true that there is only a 0.02% difference between Tencent Video and iQiyi, and Tencent Video has an advantage in actively penetrating GTI, but Tencent Video needs to face more than one iQiyi. 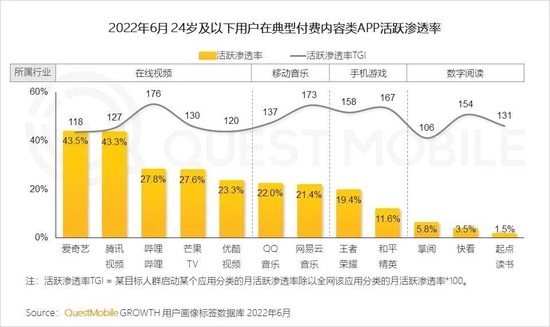 Both Bilibili and Mango TV have a penetration rate of more than 27% of users under the age of 24. The active penetration GTI of the two is higher than that of Tencent Video, of which Bilibili is as high as 176.

Although long video has become the central link of the pan-entertainment industry, at the user level, major platforms have not formed their own irreplaceability. To make matters worse, as price increases have become a consensus for long-term videos to achieve the “profitable vision”, the number of viewers who embrace shared members, pirated websites, and online disk resources has also increased visibly.

In other words, if you want to seize the new future after the industry peaks, high-quality self-made and high-proportion exclusive broadcasting are indispensable.

The content under the investment of 100 billion is “biased”

At any time, users pay for the quality of content, and users’ consensus and standards for high-quality content will only get higher and higher.

Therefore, although Tencent Video has raised the banner of “cost reduction and efficiency increase”, according to Tencent’s investor conference call in the first quarter of this year, Tencent’s management team also confirmed that it is reducing Tencent Video’s business costs. However, Sun Zhonghuai’s 100 billion promise at the 2021 Tencent Video V Vision Conference is difficult to be strongly compressed, and it will be difficult for all long video platforms, including Tencent Video, to achieve real low-cost content production in the future.

This means that how to spend money on the edge has become the key to affecting the direction of the story. Looking back at Q2 and the summer season that is coming to an end, Tencent Video lacked some promotion efforts, and also lacked some drama selection and creative rationality.

The reason for this situation is not only related to Tencent Video, but also has something to do with the epidemic, the shooting plan of the co-production company, etc. But it cannot be denied that the slow output of these works has indeed caused Tencent Video to be left behind in this type of track.

Following “Age of Awakening”, “Happiness to Ten Thousand Homes”, which was broadcast exclusively on Youku, brought a trend of main theme drama watching in July. By the end of the finale, the ratings reached the top of Dragon TV and Beijing Satellite TV. 21st place on the Internet Hot List. And iQiyi also produced its own explosive masterpiece “The World” at the beginning of this year.

Different yet similar, although the frequency of Tencent Video’s updating of realistic themes has increased significantly, the broadcast effect is not satisfactory. “come on! In “Mom”, “A New Home Covenant” and “Ladies’ Law”, there is only “Come on!” The word of mouth of “Mom” crossed the passing line, while the popularity of the three dramas was generally flat. 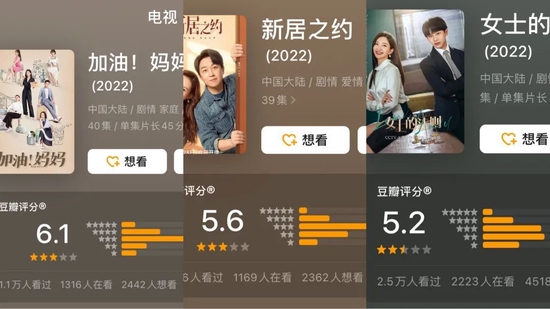 Coincidentally, the “Ode to Joy 3” and “Battle of the Roses” that are being broadcast did not create surprises. The “Ode to Joy 3”, which was performed by the “national drama facade” at noon sunshine, scored 4.3 on Douban, setting a record low in the company’s work reputation.

“Youth Pie 2”, which Mango TV participated in and broadcast exclusively on the Internet, also performed well. It won the daily top broadcast of Maoyan TV dramas for 24 consecutive days, and the cumulative number of broadcasts on Mango TV surpassed that of “Shangshi” by 3.3 billion+ .

Finally, focus on the subject of suspense.

Compared with iQiyi and Youku, Tencent Video’s advantage in the field of suspense dramas has been focused on the development of the “Ghost Blowing Lamp” IP series for a long time. It was not until the emergence of “Beginning” that this situation was significantly reversed. Although there was also a “Sweeping Storm” before, but from the official type positioning, this drama is more of a step forward for Tencent Video in terms of realistic themes.

It is a pity that Tencent Video’s main suspense drama “Babel Tower” in Q2 did not continue to promote the reversal brought by “Beginning”. On the contrary, Youku produced a Douban “Outside Court” with a score of 7.6 in Q2, and iQIYI also effectively relieved the word-of-mouth pressure of “Mist Theater” with “Night Walker”. 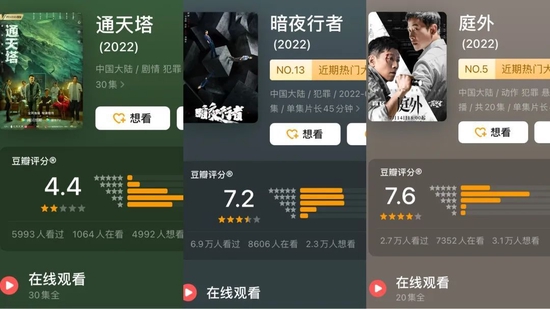 So we can see that in the more than 4 months from the beginning of Q2 to the end of the summer season, the content of iQiyi and Youku’s dramas has been stirring up the public opinion heat of suspense, reality, main theme and ancient puppets, while Tengshi The video never jumps out of the ancient puppet.

Thriving alone is not spring

It is true that both in terms of word of mouth and popularity, “Menghualu” and “Xinghan Splendid Moon Rising to the Sea” have injected vitality and energy into the tired “Tencent Ancient Puppet”, but the market has also undergone changes that cannot be ignored during this period. .

According to Yunhe data, in the first half of the year, the effective broadcast of urban-themed feature films in the new domestic dramas accounted for 31.7%, ranking first among various themes; suspense and era themes were separated into TOP2 and TOP3, while ancient puppets usually belonged to fantasy, The effective proportion of legendary themes superimposed is only 11.6%.

This shows that the audience’s aesthetic preferences have changed dramatically, and the traffic pool that can be stirred by ancient puppet themes has long been different from the past. On this basis, the involution of the subject itself is also going to the extreme.

Shortly after the broadcast of “Xinghan’s Splendid Moon Rising to the Sea”, Youku quickly launched “Agarwood is like crumbs”, and now iQiyi also joined the battle with “Canglan Jue”. On the other hand, on the same day that #玉骨 Yao will take over from the moon to rise to the sea# on Weibo, one of the “Summer Ancient Puppet Trilogy” that Youku had previously promoted, “The Star Falls Congealed into Sugar” also came out. New broadcast information.

The IP reputation is evenly matched, and the starring lineup has both traffic and topics, and it is difficult for anyone to overwhelm the other, so in the battle of your presence, it seems that all of them are “exploding”, but in fact there is no one winner.

What is even more disgusting to some viewers is that Tencent Video has blatantly “cutting leeks” again and again. Shortly after Tencent Holdings released its 2022 Q2 financial report, Tencent Video’s TV drama official Weibo announced that it would replicate the “advance on-demand” mode of “Meng Hualu” and open the finale of “Xinghan Brilliant Moon Rising to the Sea” at 19:00 on the 18th. Gift live. 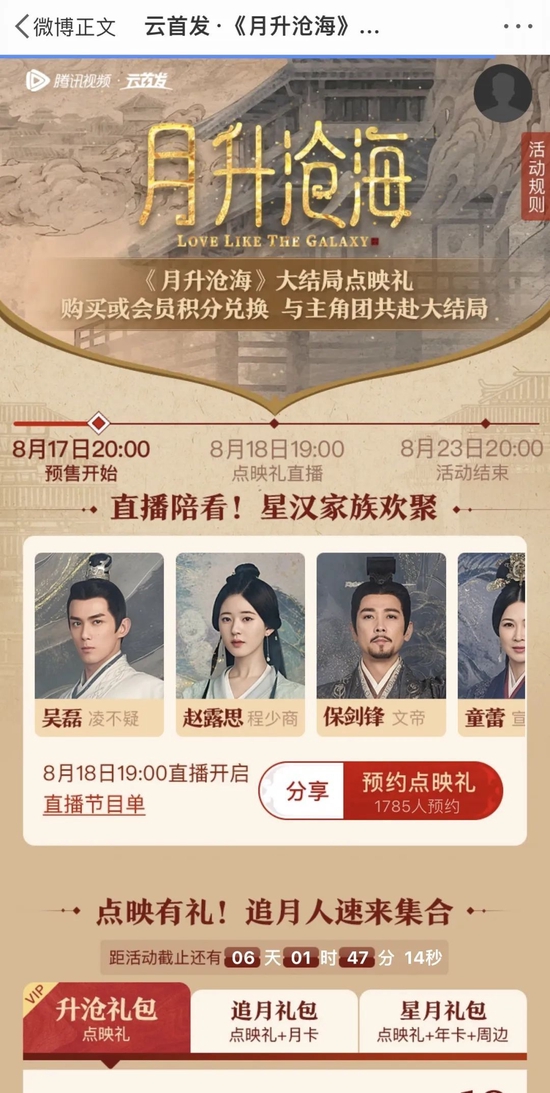 If you want to get more fish, you can’t just drop the net in one place, and a flower alone is not spring. Therefore, although Tencent Video produced “The Beginning” and “Meng Hualu” with Douban scores exceeding 700,000 in Q1 and Q2, it still could not stop the loss of paying users, and the live broadcast of the finale, which attracted a lot of buzz, also Failed to help Tencent cure anxiety.

From Q3 in 2021 to Q2 this year, Tencent’s single-quarter net profit has declined for four consecutive quarters.

At the 2022 Tencent Video Film and Television Annual Press Conference, Han Zhijie, vice president of Tencent Online Video, said that the platform will establish a coordinate system for high-quality content in the three dimensions of “breadth”, “accuracy” and “temperature”, and use this to break through episodes The boundaries of subject matter, form, and cooperation cover the entire creative chain with a creative attitude of excellence and refined operations to meet the needs of the public for content.

Similar determination Tencent Video has shown too many times, it is time to come up with tangible and lasting changes.

This article is reproduced from: http://finance.sina.com.cn/tech/csj/2022-08-17/doc-imizirav8590253.shtml
This site is for inclusion only, and the copyright belongs to the original author.