Market expectations for the Fed to raise interest rates are still rising, and there was a bet last week that the Fed would raise interest rates by 75 basis points in May. This frenzied pricing suggests that traders are not convinced that the price decline in short-term Treasuries is over, nor that the market has enough of a premium for rate hikes.

However, many doubt that the U.S. economy can withstand an additional 250 basis points of interest rate hikes by the Federal Reserve this year, and GDP data due on Thursday may show that U.S. economic momentum has fallen sharply in the first three months of the year. 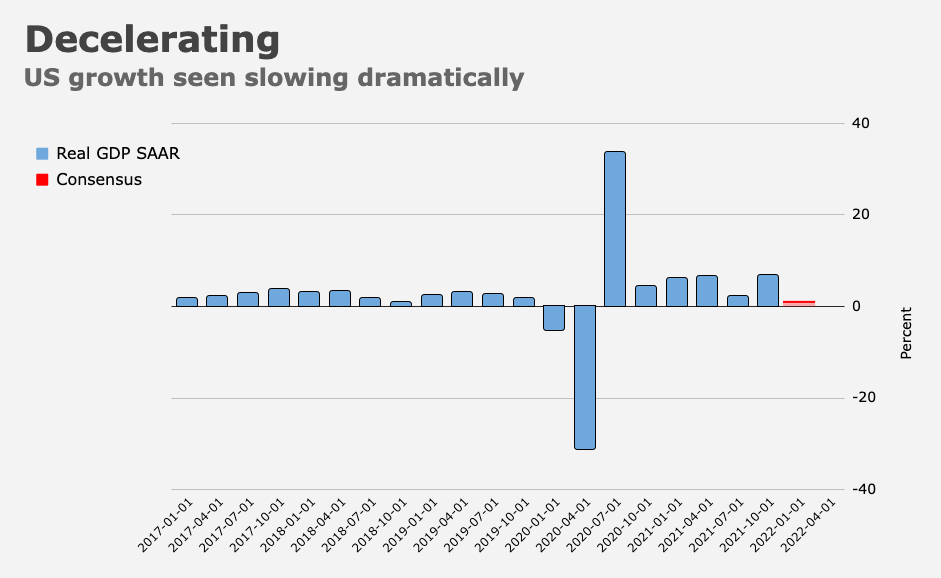 At a time when consumption has been hurt by the highest inflation in nearly 40 years, if the Federal Reserve tightens monetary policy at the fastest pace in decades, it risks completely killing economic growth. As a result, some argue that today’s Fed may be unbearable for the damage to the stock market from tightening policy compared to the Volcker era.

In the past two months, Solomon Tadesse, a quantitative expert at Societe Generale, has repeatedly said that if the cumulative effect of interest rate hikes and balance sheet reductions is considered, the Fed is unlikely to reach the market-priced number of direct rate hikes. Another expert at the bank, Albert Edwards, has also said that the Fed may not raise interest rates above 1%.

In the latest report, Tadesse updated his analysis saying:

The results of the analysis suggest that the Fed’s monetary policy cycle may peak after the Fed directly raises interest rates by 75 to 100 basis points and achieves an implicit rate hike of 220 basis points by shrinking its balance sheet by $1.8 trillion.

Tadesse is calculated by the ratio of tightening to easing (MTE), which is trending downward over time. Below 1 means that policy tends to be looser.

Given the structural shift in monetary policy, the best reference for assessing the current state is the experience of the post-inflation era since the mid-1980s. The MTE during this period was relatively stable, rising from 52% in the 1989-2000 cycle to 77% in the 2000-2007 cycle, with an average MTE of 69%.

The total degree of monetary easing in the previous monetary easing phase (including the massive liquidity injection caused by the epidemic) reached 7.9%, so in order to achieve the average MTE ratio of the past four cycles in this tightening cycle, the degree of Fed tightening needs to be from The last trough tightened by about 542 basis points (69%*7.9%).

At the same time, Tadesse reminded that the Fed’s shadow rate has now tightened substantially from cycle lows:

Taking this into account, the Fed would need to tighten by about an additional 300 basis points (2.92%) to reach the average peak of interest rate cycles observed in the post-1980s post-stagflation era. 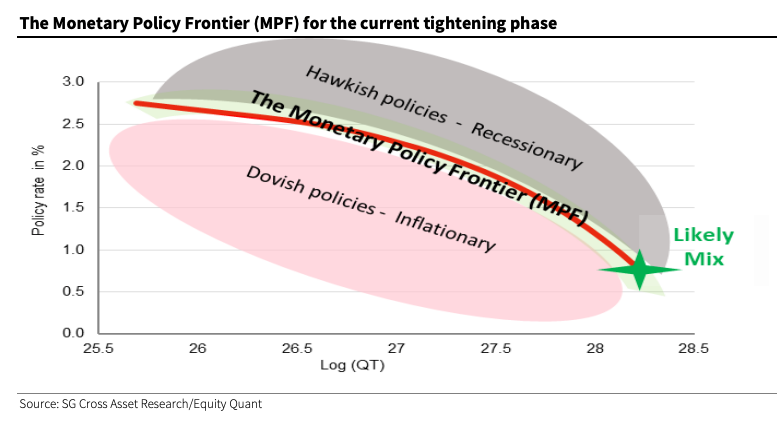 That said, if the Fed were to significantly shrink its balance sheet, the room for rate hikes would be severely limited. And if the Fed raises interest rates by an additional 250 basis points this year, as the market expects, while also shrinking its balance sheet significantly, the final tightening will be far greater than the tightening of previous cycles, which is in the gray area of ​​the chart above.

The problem is that the Fed may be planning to raise interest rates as the market expects, because the Fed is eager to restore its shattered credibility. But Tadesse said:

Analysis based on historical data suggests that any policy mix that pushes the overall monetary policy stance beyond the MPF has the potential to trigger an economic hard landing, triggering a severe market reaction and recession.

An additional 75 to 100 basis points of rate hikes combined with a QT of around $1.8 trillion is more likely, Tadesse believes.

If Tadesse’s analysis is correct and assumes that the Fed will shrink its balance sheet by nearly $2 trillion, then a 75 basis point hike or two 50 basis point hikes would exhaust the Fed’s policy space on rate hikes .

This article is reprinted from: https://news.futunn.com/post/14928411?src=3&report_type=market&report_id=204160&futusource=news_headline_list
This site is for inclusion only, and the copyright belongs to the original author.