Rising interest rates have dampened price increases, and fewer people can afford cars. Analysts believe that the cooling of the used car market may be a signal that the US economy is about to slow down.

Soaring prices are eating into the purchasing power of U.S. consumers, as people stop renewing subscriptions for Netflix’s streaming service and limit spending on big-ticket items like used cars.

U.S. used car prices have skyrocketed 90% since the onset of the coronavirus pandemic, pushing inflation to the highest level in 40 years. Now with interest rates soaring, the used car market is cooling significantly.

Wall Street News mentioned yesterday that in April, the Mannheim used car value index, which tracks the wholesale price of used cars in real time, fell 1% from March, the third consecutive month of decline since January, and the average change over the three months. The monthly decline in rate calculations was even more significant, at -6.4%.

This figure is second only to the -11.5% in December 2008 and -11.2% in April 2020. These two time periods were one during the financial crisis and the other during the market panic caused by the epidemic. 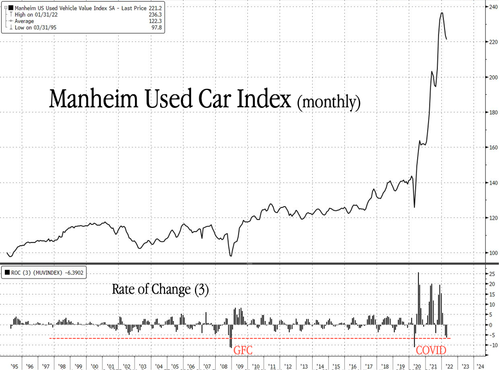 Currently, the Federal Reserve is rapidly tightening financial conditions in order to curb inflation. While the Fed hopes to deliver a perfect answer, rapidly rising interest rates are causing trouble for the world’s largest economy, which relies heavily on consumption and is used to “borrowing to spend.”

Analysts believe that the cooling of the used car market may be a signal that the US economy is about to slow down.

If you compare the rate of change of the U.S. used car price index with the used car loan interest rate, it is obvious that rising interest rates have suppressed price increases because fewer and fewer people can afford cars. Used car sales slowed sharply as interest rates soared in April, with retail sales down 13% from March.

Delaying or canceling used car purchases may just be a microcosm of Americans’ “consumption downgrade.”

According to The Wall Street Journal, some of the world’s largest retailers and manufacturers said there were signs that people were becoming more reluctant to accept higher prices in favor of lower-priced similar items. Including Marlboro cigarette maker Altria, mattress company Tempur Sealy, flower retailer 1-800-Flowers.com and some grocers say consumers are increasingly preferring discounted products and low-cost brands, and demand for higher-priced products is declining .

Americans of all income levels are changing their spending plans due to inflation, according to a research report published Thursday by investment bank Jefferies. More than 70 percent of the bank’s recent survey of about 3,500 U.S. consumers said they had turned to cheaper alternatives for groceries and household staples. Nearly 40 percent said they would put off buying big-ticket items like furniture and electronics.

A downgrade in consumer spending on entertainment has already occurred , with streaming giant Netflix reporting its first quarterly loss of net subscribers since 2011. In the UK, consumers cancelled about 1.5 million video subscription accounts in the first quarter of this year, a record level.

This article is reprinted from: https://news.futunn.com/post/15313228?src=3&report_type=market&report_id=204934&futusource=news_headline_list
This site is for inclusion only, and the copyright belongs to the original author.