​In the past two days, I have seen two names the most, one is Uncle Er and the other is Zhou Jie. The second uncle is the second uncle of a self-media person, and Zhou Jie is the son of an official in Jiangxi. Both of these people sparked a lot of discussion, but I wasn’t interested in either at first.

In fact, I have heard a lot of similar stories, and it is not uncommon.

Some people think Second Uncle’s story is too bizarre, but in fact, if not just look at the glamorous big city. The college entrance examination delays lifelong farming for various reasons. It is the basic fate of rural children, and it is very difficult to change. Because the admission rate of the entire college entrance examination is very low outside the big cities, and in some agricultural provinces, the main admissions are also concentrated in provincial capitals and developed cities. The rural education is very poor and the admission rate is low. In fact, in the article I just posted two days ago, ” Knowledge Changes Destiny Is Just an Illusion “, I just talked about it carefully.

And although we rarely see disabled people in bright big cities, as long as we go to any village, there are not many people with physical disabilities, low IQ and mental disabilities. Various quack doctors, and because of insufficient vaccination, there are already many physical disabilities in polio. In big cities, many disabled people live in seclusion, but in rural areas, they have no way to make a living without traveling through the countryside. In addition, in the early years of the reform, various factories lacked production safety and labor protection. It was indeed very common for machines to cut off their hands and break their feet. One of my relatives is one-armed, and I can’t remember the exact reason. And the eldest son of one of my cousins ​​is actually dementia, and he has not had much self-care ability in his life.

These things in the countryside are completely normal, and I don’t think they are strange. Because the biggest suffering, in many cases, is just because you were born in the countryside. Those who seem to have no disabilities and no intellectual problems actually bear a lot of hardships brought about by their identities.

If the second uncle’s story is true, then this person is of course not bad. Because in a similar situation, there are actually many people who are addicted to alcoholism, depressed, and beat their wives for pleasure. Restricted by the living environment and education, I believe that there are not a few idiots who are fairer before the reform. It’s also hard for you to criticize them.

The problem is that they are never scarce, they have always lived in this land. Only when this self-media practitioner used rich copywriting to package the second uncle’s story, did he exude inspiring power, making many people continue to watch, discuss, and like and leave messages. However, the same second uncle, if he came to a big city and passed by these audiences, might not arouse anyone’s sympathy, let alone admiration. More often, when people in big cities see old people in shabby clothes from the countryside, they think more about why they are so dirty and smelly, whether they haven’t showered for a few days.

Only after the second uncle was carefully packaged did it become scarce, inspirational, and thought-provoking.

Do you think Second Uncle has such a great spiritual core?

In fact, most people in suffering have only one simple belief, which is nothing more than to live.

This can explain why children in many cities have resonated with a film like the second uncle recently. A few years ago, many people were thinking about buying a bigger house and living a better life. Recently, what many people think is actually simple, living. So at this time, a film like the second uncle has become a very good psychological construction film. Think about how hard others are, and then think about the possible hardships in the future. What kind of bicycle do you need, to live.

Besides, Zhou Yanei, when the news first came out. I have a lot of well-informed older brothers who say this kid’s background may be fake. For example, some leaders will not hand him cigarettes, and so on. And I said, I don’t think it’s unusual. Maybe many big brothers have seen a group of big brothers with more status.

As for Zhou Yanei, I actually feel very familiar. In fact, living in China, have you really never seen Ya Nei? Many units have come in because of good family relations. Of course, there are not many hard-working and well-educated people, but there are actually quite a few like Zhou Yanei.

He said in the circle of friends, “You want to enter our unit if you think you can read or graduate from a famous school, but it’s not that easy! This person relied on his ability to read and study well, and looked down on people like us who depended on parents. Haha, the society will taught him.”

Disappointing many young people. In fact, in my opinion, he was very polite. The truth is more cruel than this. You have received a good education, you have taken the civil service exam, and you have been promoted level by level, which is like walking on thin ice, and Zhou Yanei does not need this at all.

There is a photo of Zhou Yanei’s reading, which shows that Yanei is hardworking and ignorant. He has worked hard, and the characters he doesn’t know will be marked with pinyin, and he is inexperienced. This paragraph is a page, a bunch of characters that he doesn’t know… In fact, there are no real uncommon characters. 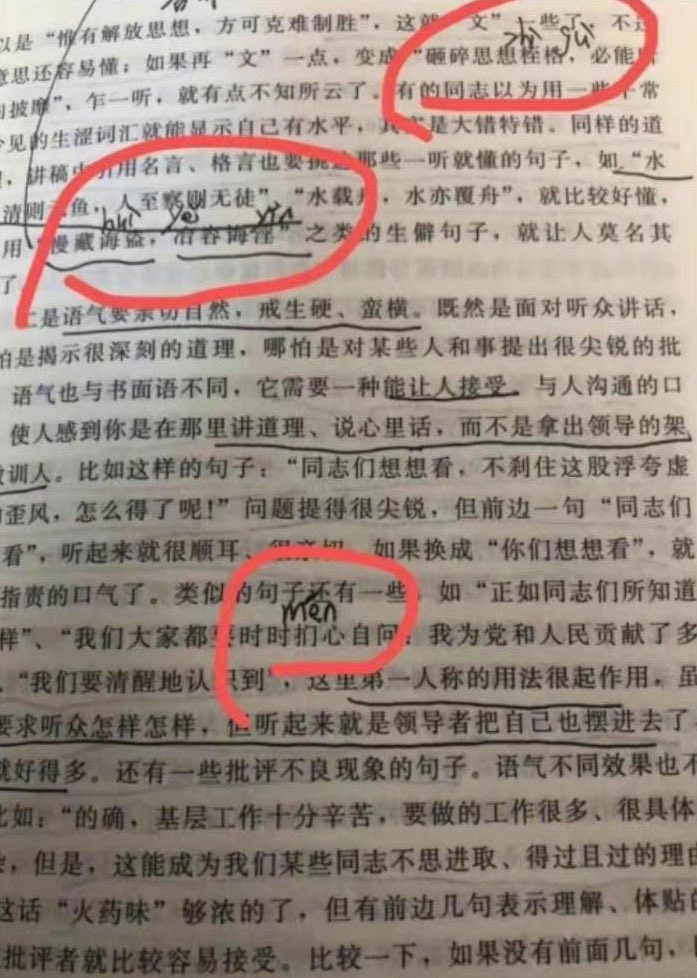 Shackles, teachings, scolding, prostitution, and scolding, I don’t know these words… I don’t know his education, but you said that he dropped out of school after the third grade of elementary school, I believe it.

In fact, many people, if they have enough life experience, would not be surprised by Zhou Yanei’s words and deeds. If I want to say, in my opinion, he is already the most unseeking and most harmless among the officials’ children.

I am trying to understand the consternation of many people. Maybe everyone thinks that it is nothing unusual to have a Yanei by my side. I am used to it. But there was such a stupid government office somewhere in Jiangxi, and I suddenly found out that I thought I was the only one with corrupt officials around me. But now I know, I am not special here, it is like this everywhere in the country.

I can only understand it this way.

But, we can’t do anything, we can just be amazed and go on with life.

It is always the courtiers around us who are making great progress, and we are the second uncles of our nephews, silently waiting for the hardships of life, looking forward to meeting a fuss-free nephew to visit us one day…

This article is reproduced from: https://codechina.org/2022/07/erjiu/
This site is for inclusion only, and the copyright belongs to the original author.