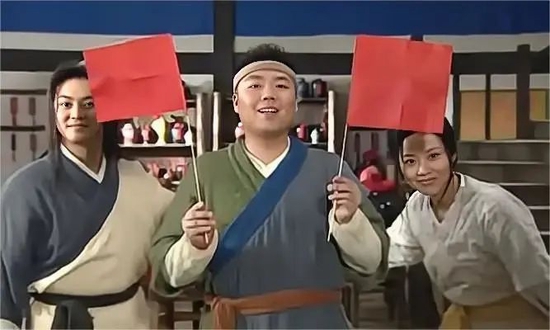 Under the influence of various factors such as local complex, Chinese people have a strong sense of regional identity and honor, and “The Sheep” innovatively introduces the mechanism of ranking by region. The championship has been changing, but what remains the same is that no matter which region “wins the championship”, it can bring a new round of enthusiasm.

A “National Games” is being staged in the game “The Sheep”.

Due to its simple gameplay and extremely high level of difficulty, “The Sheep” has recently become a phenomenal game. Discussions about how it makes people go up are also all over the Internet. The unique gameplay that has to be mentioned is the regional ranking: that is, the team is divided according to the province, and players can pass the customs to make their hometown rank up and finally win the championship.

As a result, some people stayed up all night until the early morning for their hometown rankings, some people put down work and devote themselves to it, and some even joked that they would drop out of school to contribute to their hometown, like an online National Games. And every time the ranking changes, it will trigger a round of carnival by local players. For example, one of the motivations for my colleague Lele to stay up all night to play “Sheep” is to improve the ranking in Beijing. Unfortunately, the result of her efforts is to see Beijing’s ranking drop from 10th to 14th.

At present, the “National Games” competition is still going on, the champions are constantly changing hands, and the rankings are constantly fluctuating. For a small game with simple gameplay, its life cycle is destined to not be very long, and the attractive regional elements may help “The Sheep” become popular for a few more days.

until five in the morning,

Only for their own “sheep team”

On the evening of September 14, there were at least two events that the people of Shandong care about.

One was the Chinese Super League Football League. Shandong Taishan played against the three towns of Wuhan. In the end, because of the draw, the Shandong team basically lost the possibility of winning the championship. “The Great Emperor” Li Yi’s evaluation of this is: There are some problems with the state of Shandong players, not very” excited”. 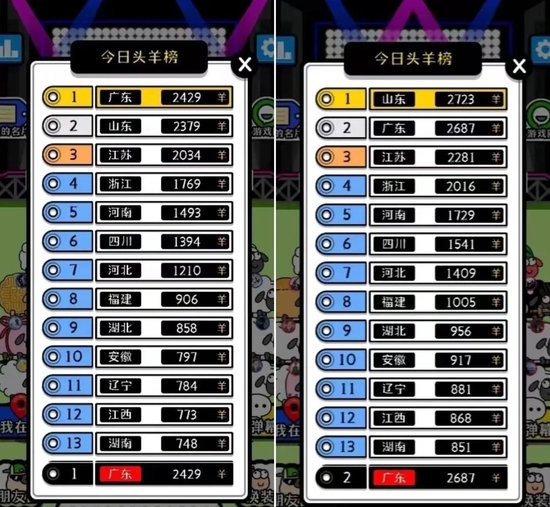 Shandong player Xiaojiao is a college student who has been addicted to “Raised a Sheep” in recent days. In order to make the Shandong Sheep team surpass Guangdong, he fought day and night, and even half-jokingly said on Weibo: “I even want to drop out of school, Playing “The Sheep Made a Sheep” full-time, fighting for the people of Shandong.”

The small game “Sheep is a Sheep” developed by Beijing Jianyou Technology almost dominated the hot search on Weibo on September 14 with 8 related entries. On that day, the related topics were viewed more than 2.2 billion times. The “sheep team” statement stems from the unique geographical ranking method of “Sheep and a Sheep”.

On the one hand, “The Sheep” has a personal ranking system similar to “Glory of the King” and “Fighting Landlords”. On the other hand, there are more distinctive city and province rankings in the game. Each time a player clears a level, they can add a “sheep” to their region, and the provinces and cities are sorted according to the total number of “sheep” from high to low. Each region is called a “sheep team”.

This ranking method has hit the hearts of many users. Some people exploded for an afternoon, some people stayed up all night, and on social platforms such as Xiaohongshu and Weibo, many people posted their contributions to the “sheep team”, “successfully contributed a sheep to the Sichuan team”, and failed to pass the level People who are in the league will also laugh at themselves, “Henan team should not be short of my sheep”, “after all, it is not worthy of being a sheep of Jiangxi team”, the feeling of regret is like an athlete who failed to qualify for the National Games. 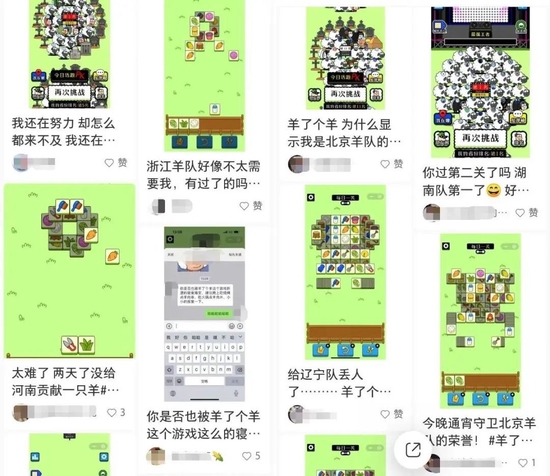 Others expressed their apologies for being dragged down by their poor record, especially the Shandong team that came second on the night of September 14, “It may be because of my roommates and I’s great intelligence that our Shandong Sheep team is ranked in the second place. The second didn’t rush to the first, it’s dragged back.” After all, Shandong people will never admit defeat easily when it comes to passing the exam.

Their efforts soon paid off.

At noon on September 15, after more than 10 hours behind, the Shandong Sheep Team successfully surpassed the Guangdong Sheep Team in “Sheep Got a Sheep” and officially reached the top. [Yang Liao Yang Shandong ranks first] even on Weibo’s hot search, and its popularity is higher than the recent basketball European Championships and other sports events.

At present, this provincial war is still going on. The first echelon composed of Shandong, Hunan, Zhejiang, Guangdong and other provinces is fiercely and especially competitive, and discussions on social media are becoming more and more intense. The championship has been changing, but what remains the same is that no matter which region “wins the championship”, it can bring a new round of enthusiasm.

The magic of geographic rankings

The explosion of “Sheep and Sheep” was unexpected by many people, but looking back at this game, it seems to be reasonable.

The first is its own gameplay. As a small program game, its gameplay is simple enough. The most basic “match-3” gameplay is similar to the once-popular “Cut Fruit” and “Jump Jump”, which makes it easy for everyone to get started.

On the other hand, its social ranking system is quite innovative. In several national-level games such as “Fighting Landlords”, “Honor of Kings” and “Peace Elite”, which are most familiar to the public, there are ranking systems and social systems, but most of them are personal ranking systems. And “Sheep and A Sheep” more innovatively introduced the mechanism of ranking by region. 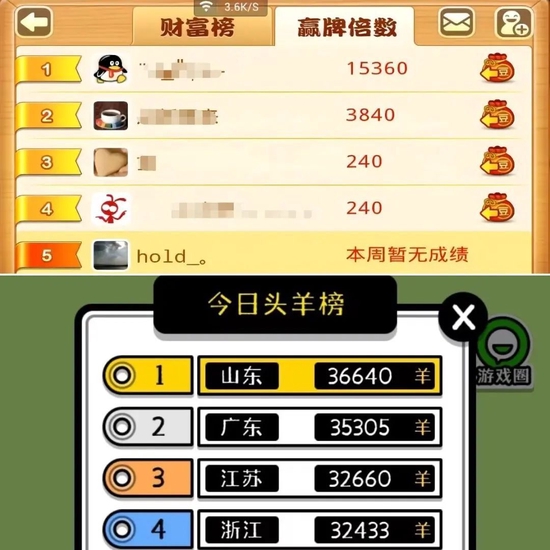 When the “territorial terrier” is implanted into the game, wonderful things happen.

Since the birth of the Chinese Internet, regional topics have been the eternal traffic password. From around 2000, “Henan people steal manhole covers”, “Northeast China is a triad”, then later “Shandong people drive excavators”, “Inner Mongolia people ride on horses and shoot arrows”, and then in recent years “Jiangsu infighting provinces”, “Cantonese eat Fujianese”, no matter how the topic of the Internet changes, regional topics will always be welcomed by netizens.

This is closely related to the soil where the Chinese Internet was born. Under the influence of many factors such as local complex, Chinese people have a strong sense of regional identity and honor. “Where are you from?” is the most common topic of conversation when strangers meet for the first time.

Such a sense of honor drives the enthusiasm of players, and a large number of players contribute to their hometown rankings like participating in the National Games. Although sayings such as “dropping out of school for the sake of the game” are jokes, it also shows that this kind of honor based on the region really mobilizes the players.

At the same time, in the second round of dissemination of “The Sheep”, the hometown “sheep team” won the championship became an important topic. A large number of players are discussing the situation of this “National Games” on social media, such as whether their hometown can win the championship, why their hometown is ranked so low, and “helping our hometown” has also become a very common game sharing copywriting. And every ranking shift brings a lot of discussion.

In fact, the “magic of the region” has also been shown in the domestic game industry before. As early as 20 years ago in the era of computer games, the relationship between regions and MMORPG online games has been very close. In the 2005 game “The Way of Chivalry”, there was a phenomenon of forming gangs according to the region, and even there was an incident of regional discrimination, which caused an uproar at that time. 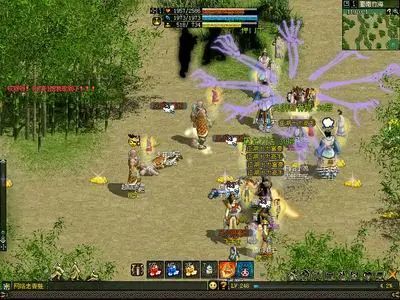 This kind of tradition has also been preserved to the present. For example, among the top game gangs in the game “Ask”, there are “China Henan”, “Qingyi Shandong” and other regional-centered gangs. Today’s e-sports leagues are also trying to introduce the concept of regions. For example, the League of Legends professional league has been working hard to develop the home field of each team since 2017, and added it to the team name, such as “LNG” changed to “Suzhou LNG”, “JDG” changed its name to “Beijing JDG” helps the major teams to be rooted in the local area and bring more local fan groups.

It is foreseeable that the success of “The Sheep” will drive a richer regional system for domestic games. Perhaps in the near future, there will also be provincial rankings in “Glory of the King”, “Fighting Landlords”, and “Peace Elite”. This kind of contest between “provincial teams” is also more interesting than the ranking duel between players.

However, “territorial stalks” are only assists after all. There are many factors that determine the vitality of a game, but the one that never changes is product power. The overnight popularity of “Sheep A Sheep” has already had negative discussions such as suspected plagiarism and too many advertisements. In addition, the life cycle of small games itself is relatively short. The grand occasion of the whole people fighting for the “sheep team” is destined to become A memory in the early autumn of 2022.

This article is reproduced from: http://finance.sina.com.cn/tech/csj/2022-09-15/doc-imqqsmrn9249359.shtml
This site is for inclusion only, and the copyright belongs to the original author.