On the evening of August 30, it was announced that Suning.com released its 2022 semi-annual report. The announcement showed that Suning.com’s revenue in the first half of the year was 37.209 billion yuan.

In terms of profit performance, the net loss attributable to listed shareholders in the first half of the year was 2.741 billion yuan, a year-on-year decrease of 20.60%; excluding the impact of changes in the fair value of financial assets and foreign exchange gains and losses, the company’s net profit attributable to shareholders of the parent company in the second quarter was the same as the first quarter. The loss was reduced by 13.71%, and the loss was reduced by 73.04% year-on-year.

Without considering the factors related to non-operating cash flow, Suning.com’s EBITDA (EBITDA refers to the profit before interest, tax, depreciation and amortization excluding the influence of non-operating cash flow factors) in the first half of the year was 859 million yuan. It has improved compared to the second half of last year. Among them, EBITDA in the first quarter was 260 million yuan, and EBITDA in the second quarter was 599 million yuan, achieving a quarter-on-quarter increase in EBITDA.

The financial report explained that on the one hand, due to the weak development environment of the external industry and the impact of repeated epidemics, consumer demand was insufficient; on the other hand, the company focused on the recovery of the home appliance business. Affected by this business strategy, fast-moving consumer goods and communication products performed better in stages. Weak; in addition, affected by liquidity, commodity inventory still needs to be further replenished, which also affects the realization of terminal sales. In addition, the decline in commodity sales has also brought about a decline in the revenue of logistics services and after-sales services. In response to the impact of the epidemic in April and May, Suning.com adjusted its response. With the continuous advancement of consumption incentive policies in various places in June, the company seized market opportunities and promoted activities such as energy-saving subsidies, 618 promotions, and air-conditioning peak season promotions. In June, the company The sales volume of goods realized a month-on-month increase of 49.07%.

In the first half of the year as a whole, Suning.com accelerated the adjustment of loss-making and inefficient self-operated stores, vigorously promoted the reduction of store rental levels, and improved offline profitability. Focusing on core business has also improved the operating conditions of Suning.com.

During the reporting period, the net cash flow generated by Suning.com’s operating activities was positive.

In terms of expenses, Suning Tesco said that it will continue to vigorously promote expense control and improve internal management efficiency, with remarkable results. In the first half of the year, operating expenses decreased by 47.82% year-on-year, of which Q2 operating expenses continued to decline from Q1. The year-on-year increase in financial expenses was mainly due to the increase in interest expenses caused by the increase in the Company’s interest-bearing liabilities during the reporting period compared to the same period.

In response to the measures in the second half of the year, Suning.com stated that the company will continue to increase the inventory level, and take advantage of the peak sales season in the second half of the year to further enhance the sales capabilities of various channels, especially the sales of offline stores and Tmall flagship stores; to strengthen the sales of home appliances, Provide special services; increase the scale of communication categories; speed up the adjustment and optimization of fast-moving consumer goods and department stores to improve operational efficiency; continue to promote business expansion such as retail cloud in sinking markets.

It is expected in the financial report that in the second half of the year, the company should be able to achieve a good year-on-year improvement in revenue and gross profit levels.

The financial report also disclosed the latest number of shareholders and shareholding of Suning Tesco as follows: 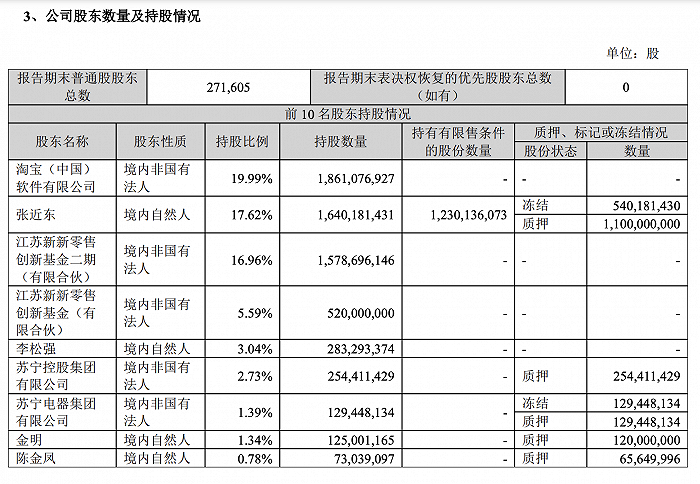 This article is reprinted from: https://readhub.cn/topic/8iUxcezEnyd
This site is for inclusion only, and the copyright belongs to the original author.