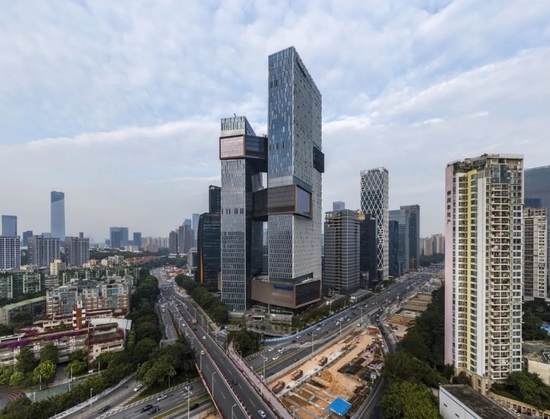 In the past six months, Tencent Holdings’ share price has dropped from a high of HK$775.5 to HK$312.6 on the most recent trading day, a drop of nearly 60%, which has also led to many questions from the outside world that “Tencent is still the invincible Tencent”. debate.

It’s rare to see a company’s earnings release receive so much attention.

The reason why it has received so much attention, the author believes that there are two main reasons. On the one hand, the entire Chinese business community is in a bleak business situation in the second quarter of 2022, and Tencent Holdings, as the most influential and fundamentally stable company in China, the public hopes to see some good signs from Tencent Holdings; On the one hand, Tencent Holdings’ stock price has been falling incessantly in the past six months or so. Many investors hope to see Tencent Holdings achieve good performance as a hedge against the slump in the capital market. However, this financial report of Tencent Holdings not only failed to satisfy the public’s wishes, but also made many people feel more pessimistic. Because one of the key data is the most eye-catching, that is, Tencent Holdings’ net profit attributable to shareholders in the second quarter of 2022 was only 18.619 billion yuan, a 56% drop compared to the same period last year. For those who did not read Tencent’s financial report in detail, 56% The drop is truly horrific.

However, when I read the information about Tencent’s financial report, I noticed that its revenue in the second quarter was 134.034 billion yuan, down only 3% year-on-year; gross profit was 57.867 billion yuan, down only 8% year-on-year. In the second quarter, a strong cost control and expense saving plan was implemented. According to normal logic, it is unreasonable for its net profit to drop by 56%, so the author downloaded and read the complete financial report of Tencent Holdings in detail.

When studying the full version of the financial report, the author found that the real performance of Tencent Holdings in the second quarter was far less bad than it appeared on the surface, and two important figures were greatly ignored by the outside world. 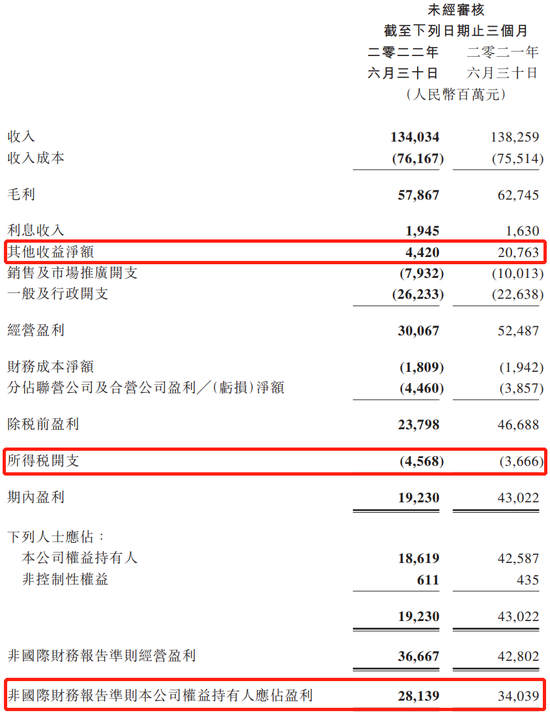 The first is other income, net. The financial report shows that the net other income of Tencent Holdings in the second quarter of 2022 was 4.42 billion yuan, while in the second quarter of 2021 it was 20.763 billion yuan. Huge gap. However, this data does not truly reflect the actual operating conditions of the company, and it is a non-IFRS adjustment item, mainly referring to the investment income from the disposal of investment companies by the company and the provision for impairment of investment companies.

The second is income tax expense. The financial report shows that while Tencent Holdings’ operating profit declined in the second quarter of 2022, its income tax expenses increased by 902 million yuan to 4.568 billion yuan compared with 3.666 billion yuan in the same period last year. This was primarily due to “low base effects resulting from a one-time deferred tax adjustment related to an investment company last year, and provision for withholding tax in the current quarter,” the earnings report explained.

The above two data unrelated to the actual operation of the company have a total impact of 17.245 billion yuan on profits. Regardless of the above two factors, Tencent Holdings’ actual profit performance in the second quarter of 2022 is much better. According to non-IFRS, Tencent Holdings’ real net profit attributable to investors in the quarter was 28.139 billion yuan, down only 17% year-on-year. For super-large companies that are closely related to the broader Chinese economy, it is not easy for Tencent Holdings to achieve such performance in the second quarter, which was severely affected by the epidemic.

It is also worth mentioning that Tencent Holdings still maintains high investment in R&D. In the second quarter, R&D investment reached 15.01 billion yuan, a year-on-year increase of 17%. Although the investment in research and development has lowered Tencent Holdings’ profitability in the second quarter, it will be transformed into the company’s core technology and core capabilities in the long run, and will eventually be realized as performance.

If we disassemble the performance of each revenue segment of Tencent Holdings carefully, we will find that it is more optimistic than the overall performance. At present, Tencent Holdings is mainly divided into three parts in terms of revenue structure: value-added services, online advertising, financial technology and corporate services. 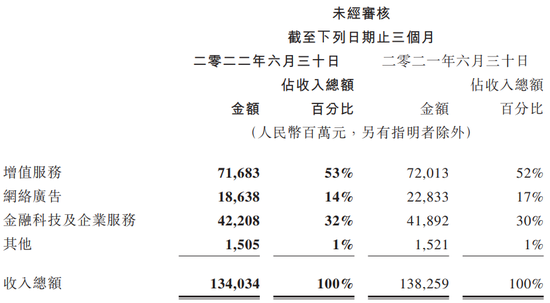 The financial technology and corporate services segment increased by 1% year-on-year to 42.208 billion yuan. Among them, the revenue of enterprise services centered on cloud computing decreased slightly year-on-year, which was mainly due to the business strategy of reducing loss-making projects implemented by Tencent CSIG (Cloud and Smart Industry Business Group). The fintech segment continued to grow despite the impact of the epidemic dampening commercial payment activities in the second quarter.

From the revenue composition of the above three major parts, we can see that Tencent Holdings’ value-added services, financial technology and enterprise services still performed strongly in the second quarter, while the online advertising business with poor data performance did not compare to other outstanding peers. Left behind, on the contrary, it has a larger scale and stronger resilience. And in June, when the epidemic improved, Tencent Holdings’ various business data have improved significantly.

In the previous article, we disassembled the performance of each revenue segment of Tencent Holdings from the perspective of revenue composition. However, because the revenue composition and business composition do not correspond one-to-one, it will lead to certain difficulties for readers to understand Tencent’s business. Finally, we analyze the real business situation of Tencent Holdings from the specific business.

Although Tencent Holdings currently has many business units and product lines, if we summarize it, I think it can be roughly divided into four main lines.

The first main line is a high-quality content line with Tencent Games, Tencent Video, Tencent Music and China Reading Group as the main body. Its business model is mainly based on content payment, which Tencent calls value-added services.

In this part, Tencent Holdings has already occupied an absolute leading advantage in China, and it is difficult for it to achieve large-scale revenue growth, but it will never experience a sharp decline in performance. For example, “Honor of Kings” and “Peace Elite” under Tencent Games are the two games with the highest total usage time in the industry; Tencent Video has 122 million paid members and Tencent Music has 83 million paid members, both of which are the highest in the industry. 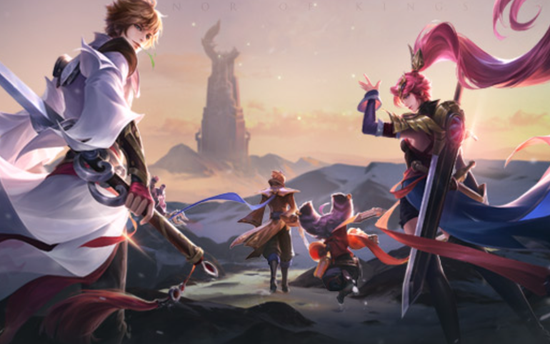 And with the internationalization of Tencent games, the improvement of Tencent Video’s profitability, the coordinated live broadcast of Tencent’s music and video accounts, and the progress of China Literature Group in the field of IP linkage, the profit contribution capacity of these businesses can also be strengthened. In addition, this part of the business is currently mainly coordinated by Ren Yuxin, the most capable executive of Tencent Holdings, and the synergy between the various parts is happening well, which is worth looking forward to in the long term.

The second main line is a social line centered on the WeChat platform, which has multiple product functions with large user scale and huge traffic, such as circle of friends, public platforms, mini programs and video accounts.

The third main line is a financial technology line with WeChat payment as the core, which is derived from WeChat, but has become an independent army.

At present, Tencent Financial Technology has formed a comprehensive financial service ecosystem covering commercial payments, loans, wealth management and insurance, and the profitability of this part of the business is considerable. Even in the most difficult second quarter of 2022, it still maintained a growth trend, and there is still a lot of potential to be tapped in the future.

Before the 930 reform in 2018, there was a big gap between Tencent and Alibaba in the field of enterprise services, and many outside experts believed that there was no To B gene. But nearly 4 years later, Tencent has built a balanced product ecosystem that combines IaaS, PaaS and SaaS, and has grown into the only domestic enterprise service giant that can compete with Alibaba. Some areas such as online conferences and CRM have been surpassed and are recognized as synonymous with the industrial Internet, and the outside world has never questioned that Tencent does not have a To B gene.

According to the latest data in the financial report, the combined monthly active accounts of Tencent’s core products WeChat and WeChat have reached 1.299 billion, which basically covers all Internet users in China. Tencent is bound to invest more resources and energy in the field of enterprise services. If in the past 4 years, Tencent has only formed a formation in the field of enterprise services, then the real decisive period will be in the next 10 years.

In addition to the above four main lines, Tencent also has a large number of other sub-product lines of QQ, QQ Browser, Tencent Computer Manager, Application Treasure and Tencent News. Most of these product lines have large or small problems due to changes in user needs brought about by the changing times, and Tencent is often questioned by external public opinion because of these problems. But these problems are no longer the main problems of Tencent, which cannot cover up Tencent’s strength in core business. The above four main business lines are enough to support Tencent’s sustainable development for a long time, and Tencent is also selectively withdrawing from some non-core businesses.

In the past nearly half a year, despite the impact of the epidemic, policy controls, economic recession and the reduction of major shareholders, Tencent Holdings’ share price has fallen from a high of HK$775.5 to HK$312.6 on the latest trading day, a drop of nearly 60%, which also led to a lot of debates about “Tencent is still the invincible Tencent”.

Based on the analysis of Tencent Holdings’ financial report in the most difficult second quarter, the author believes that Tencent is still the same Tencent that its business foundation has not been shaken, and the real situation is far more optimistic than the financial appearance and stock price reflect. Just a little more patience.

This article is reproduced from: http://finance.sina.com.cn/tech/csj/2022-08-19/doc-imizirav8781451.shtml
This site is for inclusion only, and the copyright belongs to the original author.