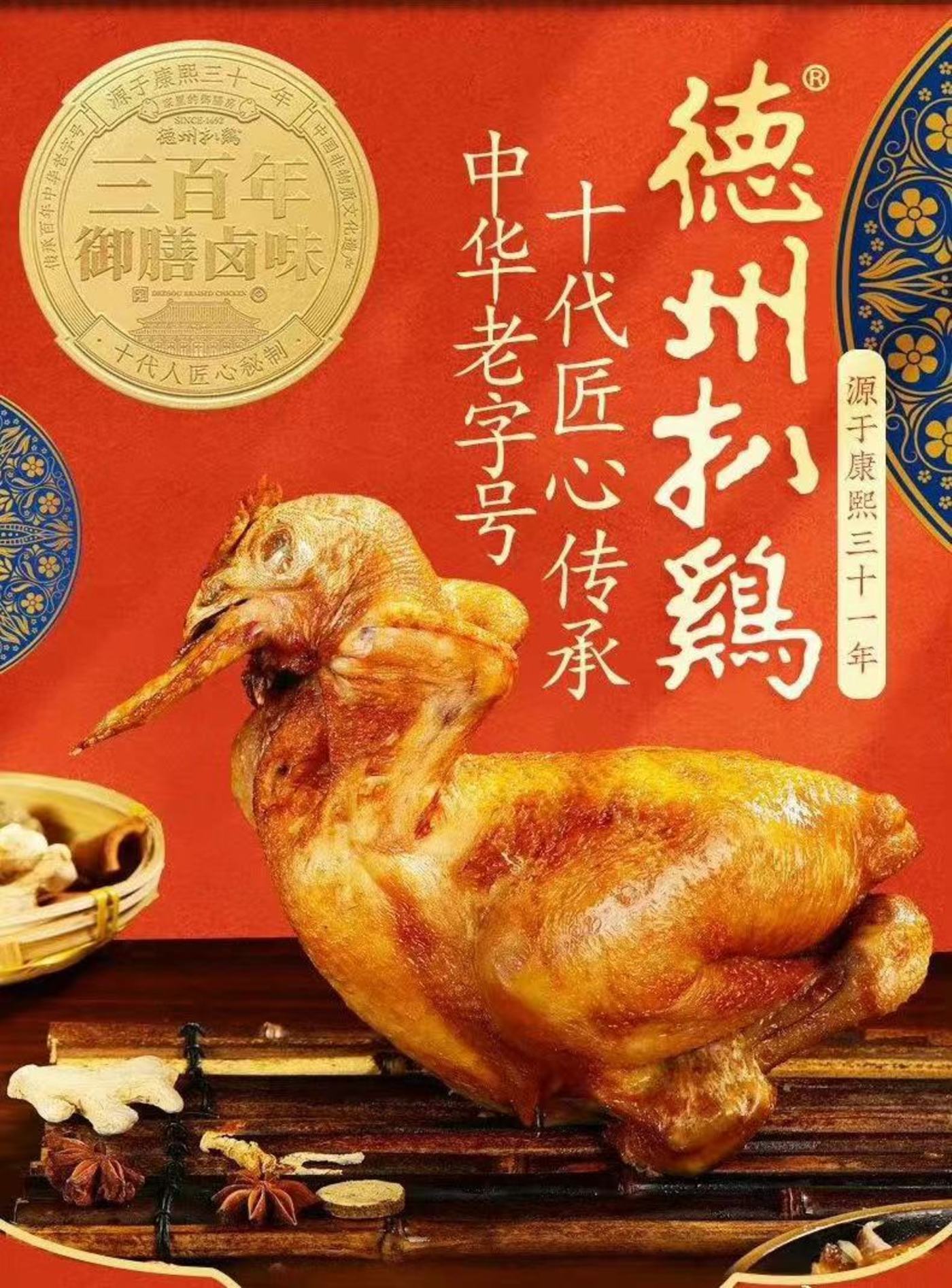 The capital market “eats chicken” one after another. Just after the meeting of Ziyan Baiwei Chicken, another lo-mei enterprise, Dezhou Braised Chicken, also sounded the clarion call for listing.

Recently, the website of the China Securities Regulatory Commission showed that Shandong Dezhou Braised Chicken Co., Ltd. (hereinafter referred to as “Dezhou Braised Chicken”) pre-disclosed the prospectus, and plans to raise 758 million yuan for projects such as production expansion and brand upgrading. listed on the main board.

As a century-old brand, Dezhou Braised Chicken has the reputation of “China’s No. 1 Chicken”, but it also has the common problems of time-honored brands such as limited channels and categories. Taking the data of 2021 as an example, the revenue brought by the East China market (mainly Shandong) accounts for more than 80% of the company’s annual revenue, and the product category is relatively simple, and the sales of the main product, braised chicken, accounts for more than 60%.

In addition to the above two major problems, Dezhou Braised Chicken has also experienced food safety problems, including the detection of chloramphenicol by the supplier, the products sold by subsidiaries that do not meet the national standards, and the products have been repeatedly complained by consumers.

From the perspective of equity structure, Dezhou Braised Chicken has obvious family color. The founder Cui Guihai’s family has absolute controlling rights, and there is a suspicion of surprise dividends before the IPO. The Cui Guihai family uses this to cash out about 144 million yuan. In the process, Tiantu Capital, a well-known investment institution, also reduced its holdings and cashed out nearly 79 million yuan.

Some food industry researchers believe that from the perspective of market space and development, Dezhou Braised Chicken is inferior to the “Big Three of Luwei” Juewei Food, Zhou Hei Ya and Huang Shang Huang in terms of revenue scale, number of stores, product categories, and consumption scenarios. The future imagination is limited.

Facing the dual restrictions of geography and category

In the 1970s and 1980s, trains became the main means of transportation for people. On the green-skinned trains with journeys of more than 20 hours, Dezhou Braised Chicken, with its unique flavor and the name of “gourmet food”, gradually became popular in train food sales. popular.

But today, with the increase of high-speed rail lines, people’s travel time has been greatly shortened, and the consumption scene of Dezhou Braised Chicken on the train has gradually disappeared.

This shows that, as a specialty food produced in Texas, Dezhou Braised Chicken still has distinct regional characteristics and has not yet opened the national market.

According to the prospectus, by the end of 2021, the number of Dezhou Braised Chicken stores will be 553, including 85 directly-operated stores and 463 franchise stores. All the above-mentioned stores are also mainly concentrated in Shandong Province and the Beijing-Tianjin-Hebei region, with few layouts in the southern market.

In the prospectus, Dezhou Braised Chicken admitted that the main financial difficulty facing the company is that the company’s product sales are still mainly in Dezhou, Shandong and surrounding areas, although direct stores or sales offices have been set up in Beijing, Qingdao and other cities, and plans to continue. Promote products to the whole country, but due to the limitation of production capacity and funds, the company’s strategic goal of radiating the whole country has been slow.

Therefore, the company needs to open up more markets to develop its business, but at present the financing means are relatively simple and the financing scale is limited. If only relying on the company’s own accumulation and indirect financing, it will be difficult to meet the needs of the company’s development.

There are objective reasons for this. According to the prospectus, the company’s fresh braised chicken and other products have a shelf life of only 2-7 days, resulting in a short product sales coverage radius. Currently, it can only cover Shandong and the surrounding provinces of Beijing-Tianjin-Hebei. The limitation of product sales radius has become a constraint on the company’s future business level. main bottleneck to growth.

In addition to geographical dependence, the category of Dezhou Braised Chicken is relatively single. The products are divided into braised chicken, meat and non-staple food, supermarkets, etc. Among them, braised chicken is still the main source of income. In 2021, the revenue of the above three categories of products will account for 66.80%, 11.41% and 17.57% respectively.

In order to get rid of the disadvantage of a single category, in 2019, Dezhou Braised Chicken launched a sub-brand Lu Xiaoji, which mainly focuses on braised snacks such as tiger skin chicken feet, honey sauce chicken legs, and honey sauce chicken gizzards.

However, the multi-category strategy does not seem to have caused too much water. According to public reports, in 2020, Lu Xiaoji’s series of products will achieve sales of 20 million yuan, which is far from the original target of 500 million yuan in three years.

The first largest customer has only been established for 3 years, and the company’s debt ratio has risen

The prospectus shows that during the reporting period, the sales revenue of the top five customers of Dezhou Braised Chicken accounted for 6.65%, 7.62% and 8.85% respectively, which is not a high proportion.

But it is worth noting that Tianyancha shows that Dezhou Mute Trading Co., Ltd. (hereinafter referred to as “Dezhou Mute”), which will be the largest customer of Dezhou Braised Chicken in 2021, was established in January 2019, and its business scope is food, Alcoholic beverages, dairy products, office supplies, office equipment sales, cigarette retailing, corporate marketing planning, and meat products are not included.

When it was established on January 8, 2019, the company was registered for 1 million yuan and 100% of the shares were held by a natural person. In September 2020, the registered capital of Dezhou Mute increased to 8 million yuan, and the business scope increased the items such as fresh meat retail, food operation (sale of pre-packaged food) and catering services.

But in the year of its establishment in 2019, Dezhou Mute has become the fourth largest customer of Dezhou Braised Chicken, with a sales amount of 8.62 million yuan, accounting for 1.25%.

In the next 2020 and 2021, Dezhou Mute will be the third and first largest customer of Dezhou Braised Chicken, respectively, contributing 10.2565 million yuan and 18.5389 million yuan in sales. And as of the end of the reporting period, Dezhou Mute’s accounts receivable balance was 134.26, making it the fifth largest customer of the company’s accounts receivable.

Another point of concern for Dezhou Braised Chicken is the company’s high asset-liability ratio.

The predecessor of Dezhou Braised Chicken Company was founded in 1953, when it was called Dezhou Food Company.

During the above development process, Dezhou Braised Chicken has undergone 15 equity transfers, and its identity has also changed from an enterprise owned by the whole people to a current family-owned enterprise.

In recent years, Dezhou Braised Chicken has not been stingy with dividends despite its debt ratio rising year by year.

During the reporting period, the three-year net profit of Dezhou Braised Chicken totaled 336 million yuan, which means that the above-mentioned dividends took away 71% of the net profit. According to the shareholding structure, the 144 million yuan of dividends went into the pockets of the actual controller Cui Guihai’s family.

In addition, on the eve of the listing, some investors in Dezhou Braised Chicken cashed out and reduced their holdings, and the affiliated companies of the actual controller suddenly bought shares at a low price.

At the end of 2012, Tianjin Tiantu and Shenzhen Tiantu received 8.55 million shares and 950,000 shares of Dezhou Braised Chicken respectively from the original shareholders Hu Zhenqiang and Cui Guihai at a price of 8.75 yuan per share, with a shareholding ratio of 10.69% and 1.19%, respectively. The second and sixth largest shareholders.

According to public information, Tiantu Capital is an investment institution focusing on the field of consumer goods. Its investment cases include brands such as Zhou Hei Ya and Chayan Yuese. But just after Dezhou Braised Chicken signed an initial public offering and listing counseling agreement with Guotai Junan in July 2020, nearly 79 million yuan was cashed out.

According to Tianyancha, Dezhou Haitai is 19% owned by Cui Chen, one of the actual controllers of Dezhou Braised Chicken. Moreover, the share price of 5 yuan/share is much lower than the transfer price of Tiantu Capital’s 17 yuan/share at the beginning of the year.

In a test conducted by the Shandong Provincial Market Supervision Bureau in December 2019, chloramphenicol was detected in a batch of fresh chickens produced by Shandong Ronghua Food Group Co., Ltd.

Chloramphenicol is a bactericide, and the human body may consume a large amount of chloramphenicol residues in food for a long time, which may lead to digestive disorders. According to the regulations of the Ministry of Agriculture, chloramphenicol shall not be detected in all food animals.

According to the prospectus, in 2019 and 2021, Dezhou Braised Chicken purchased 8,723,700 yuan and 8,722,400 yuan of chicken by-products from Shandong Ronghua Food Group Co., Ltd. respectively, making it one of the company’s top five suppliers.

In March this year, in the supervision and sampling inspection of Shandong Provincial Market Supervision Administration, as a wholly-owned subsidiary of Dezhou Braised Chicken, Dezhou Braised Chicken Supermarket Co., Ltd. sold ready-to-eat jellyfish head on Sanba Middle Road, and the total number of colonies did not meet the national food safety standards. Regulation.

On the Black Cat Complaint Platform, some consumers also complained that Dezhou Braised Chicken “deteriorates and tastes bad within the shelf life”, “smells from the bag”, and “has foreign matter”.

According to Zhu Danpeng, an analyst in the food industry, with the improvement of the quality of life of the people, any brand with food safety problems may, to a certain extent, lead to a brand crisis.

This article is reprinted from: https://readhub.cn/topic/8i6lq4xEhHT
This site is for inclusion only, and the copyright belongs to the original author.