On the evening of July 28 , along with the clouds, Huawei officially launched HarmonyOS 3 in the Huawei full-scenario new product launch conference.

In Huawei’s eyes, HarmonyOS has long been the core of Huawei’s ecological development. The continuous upgrade over the past three years has transformed HarmonyOS from an early “ teenage boy “ into a strong “ boxer “ , which has become a unique symbol of Huawei’s equipment.

Judging from the market response of HarmonyOS 2 , Huawei is undoubtedly a success. Only one hundred days after the system was released, it has already had over 100 million upgrades, and the version upgrade rate is as high as 77% . So far, HarmonyOS has become the fastest growing terminal operating system in history.

The first generation of HarmonyOS was not used on mobile phones, tablets and other devices, but the appearance of HarmonyOS 2 really started the name of HarmonyOS. On HarmonyOS 2 , Huawei’s breakthrough distributed soft bus technology has given all those who “ speak badly “ about Huawei a heavy blow. Through distributed technology, Huawei has won unanimous praise from consumers; in addition, Huawei has also actively Innovate, adding functions such as desktop cards, large folders, control center, etc., both in terms of face and lining, giving consumers enough sincerity.

But choosing an unknown road always comes with risks, which means that Huawei’s future direction is an unknown field. Every step is like walking on thin ice. Huawei, with HarmonyOS , eventually becomes an “ adventurer “ .

At this conference, Huawei introduced the new features of HarmonyOS 3 through a large amount of space, and highlighted the advantages of its own “ Hyper Terminal “ through a more scene-based introduction.

There is no doubt that Huawei is fully prepared and wants to enter a bigger stage.

For HarmonyOS 3 , HyperTerminal and Hongmeng Zhilian are its biggest killers, and this is also the biggest upgrade of HarmonyOS 3 .

In HarmonyOS 3 , Huawei has expanded the product category of HyperTerminal again, supporting 12 devices such as mobile phones, tablets, PCs , smart screens, speakers, headphones, watches, ink tablets, monitors, printers, smart glasses, and car machines. Through the advantage of quantity, we will widen the gap between our own experience and those of our friends. 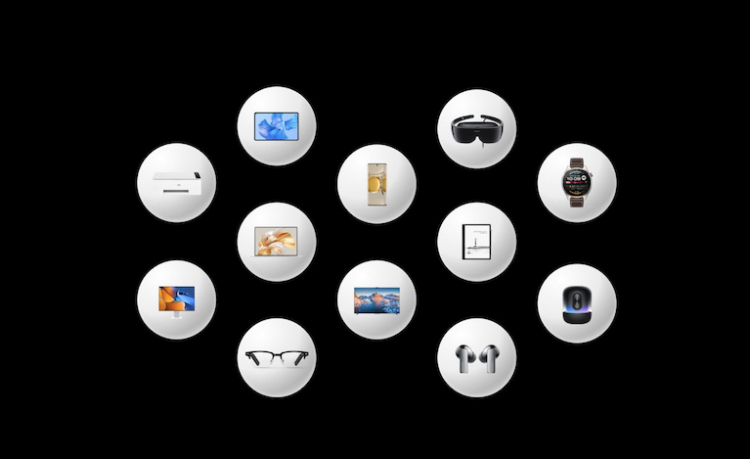 More devices also means more connection combinations. Huawei has adapted the HyperTerminal function for most platforms this time, which means that these devices with screens can also be connected as the center of the device. and combination.

For example, common office scenarios: PC+ monitor + headphones, take the PC as the core of the hyperterminal, the monitor as the second extended screen of the PC , and the headphones as the audio output, allowing the devices to interact and collaborate on their own, or smart screen+watch+ Headphones, tablets + glasses + monitors, etc.

On HarmonyOS 3 , Huawei reduced the end-to-end delay of the distributed soft bus technology to 1ms , achieved a 20% improvement in transmission performance in interference scenarios, and reduced the chain establishment delay by 50% . HyperTerminal “ has a better user experience. In addition, Huawei has also brought a new multi-device communication and network sharing function, which can give the cellular capabilities of the mobile phone to the tablet, and the tablet device can also perform phone calls, text messages and Internet access functions without inserting a SIM card. 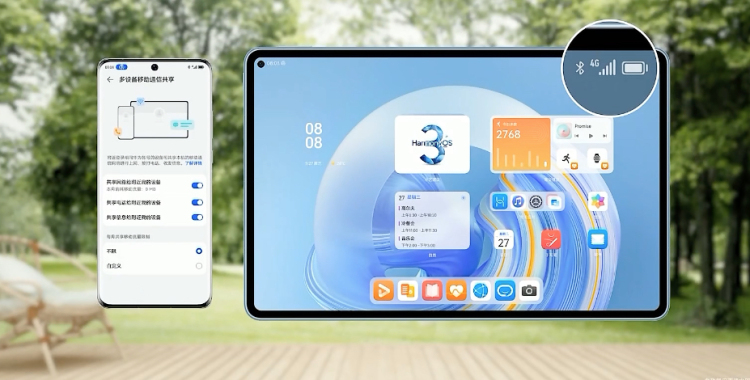 In the music playback control center of HarmonyOS 3 , Huawei has also made a bigger upgrade, which not only allows two Bluetooth headsets to share audio, but also controls the music of smart screens and speakers. Huawei has already made the “ Internet of Everything “ the core of Huawei’s hardware and software ecosystem.

Most of the upgrades to HarmonyOS 3 this time are on the “ lining “ .

Friends who often watch Huawei’s conferences know that at the launch of Huawei’s Mate 9 series, Huawei proposed the concept of 18 -month mobile phone use. At the launch of the Mate 40 series, Yu Chengdong also said 36 months. If not, it can be seen that Huawei has an almost paranoid pursuit of the durability and fluency of mobile phones. 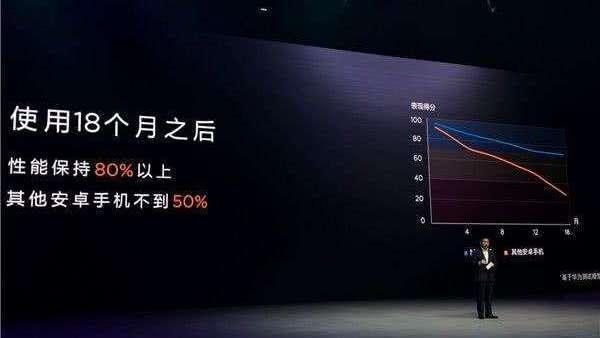 Image source: from the Internet

On HarmonyOS 3 , Huawei also mentioned persistence and smoothness. According to the official statement, HarmonyOS 3 has carried out full-stack optimization on the overall architecture of the operating system. The P50 Pro application equipped with HarmonyOS 3 has a 7% increase in startup speed, an 18% increase in sliding fluency, and a 14% increase in TOP application operation response speed. Reading, chatting and other scenarios have a smoother experience.

In addition, in terms of appearance, the new HarmonyOS 3 introduces new features such as card holder stacking combination, card customization, etc. While keeping the desktop clean, you can also customize the outline, photo frame, stickers, backgrounds and other elements of the card. Customized.

By the way, the overall interface style of Huawei’s tablet, folding screen and candy bar phone has also been unified. All the personalized combinations on the HarmonyOS 3 mobile phone, such as card stacking, large folders and other functions, can be realized on the tablet. And on the folding screen device to achieve visual synchronization.

If some applications are frequently applying for permissions in the background and screen lock, HarmonyOS 3 will remind the user to close this permission, which includes privacy permissions: camera, microphone, location, files, multimedia, contacts, etc. sensitive data.

On top of this, Huawei has also added an active privacy protection function. When we send a photo, it is likely to send the location, shooting time, device model and other information of the photo at the same time.

In addition, at this conference, Huawei also said something that impressed me: technology does not leave anyone behind.

This leads to the information barrier-free construction of HarmonyOS 3. On HarmonyOS 3 , Huawei brings a series of auxiliary functions such as image recognition, travel assistance, photo assistance, and AI subtitles, so that people with visual impairment and hearing impairment can feel it. The fun of technology.

Nowadays, other mobile phone manufacturers are still upgrading the basic information barrier-free construction. I believe that Huawei’s series of AI -based auxiliary functions will bring them more imagination and innovation to help the world most in need. helping crowd.

From my personal point of view, the significance of HarmonyOS 3 is more in the “Internet of Everything”, and the solutions shown by Huawei today are enough to support the future that consumers want.

Want to do, dare to do, is the best fuel to drive technological innovation.

But in fact, the biggest problem at present is that many manufacturers do not want to do better innovation, but copy the solutions of other manufacturers. This uninnovative field needs Huawei.

To this day, I still clearly remember that on the blackboard in my primary school classroom, the words “ comparing, learning, catching up, helping, surpassing “ were written, expressing the mutual help and competition among classmates. Transcendent complex emotions.

Although Huawei’s conference is still a little confusing, it is a bit philistine to insert various new product introductions into the function introduction of HarmonyOS 3 . But to me, some of the internal updates in HarmonyOS 3 really give consumers a sense of where the future is headed. Compared with the sloppy sentence of other manufacturers “ upgrading the bottom layer of the system and enhancing the application experience “ , it is obviously more flavorful to bring scenario-based future vision and innovation to consumers.

Huawei is like a confused “ adventurer “ , but it has its own paranoia compared with other manufacturers. While other mobile phone manufacturers are racking their brains to find selling points, Huawei has moved in the direction it wants and practiced.

To be honest, as a digital blogger, I have long been numb to the release of this “ form over meaning “ conference on mobile phone systems, and maybe I can only look forward to the next-generation systems of Apple and Huawei in a year.

The reason for liking is not that I like these two brands, but that we can only see their plans and directions for the future at their press conferences, which is really exciting, not some exaggerated UI updates.

Under the surface UI “ upgrade “ , we can see clearly who is “ naked swimming “ .

In my opinion, Huawei, which is betting on the “ Internet of Everything “ , may be confused, but it will definitely not lose confidence.

HarmonyOS 3 is still desperate, breaking the boat, and firmly embracing the “Internet of Everything”.

By the way, PixLab V1 , the first color inkjet printer owned by Huawei, was also released at this conference. I have to say that if HarmonyOS 3 is not released, this conference is really like a “ commodity exhibition “ . It seems that Huawei still has a long way to go.

The upgrade plan for HarmonyOS 3 is to start a scale upgrade in September . Some models can be updated to the Beta early adopter version. At the same time, we will also apply for and upgrade. In the follow-up, we will bring you more detailed actual hands-on experience evaluation. If you have any different opinions or views, please leave a message and discuss in the comment area.

This article is reprinted from: https://readhub.cn/topic/8hZOPxgAVCS
This site is for inclusion only, and the copyright belongs to the original author.