August 18, 2022 – Twitter today released “Unbounded Travel: 2022 Twitter Game Global Insights White Paper” (hereinafter referred to as “Twitter Game White Paper”). As a social service platform that brings together public conversations and real-time hotspots, Twitter is also a “lookout” for insight into the development of the global game industry. The “Twitter Game White Paper” provides Chinese game manufacturers with a theoretical and practical marketing guide for overseas marketing through in-depth analysis of the prospects of the overseas destination market, combined with player insights and the insights of marketing experts, and promotes the “unbounded travel” of Chinese games.

In 2021, the actual overseas sales revenue of China’s self-developed mobile online games will reach US$16.09 billion, a year-on-year growth rate of 21.8%, becoming a model for high-quality growth in the global game industry. “From its infancy to being famous on the list, Chinese games are actively going global with the attitude of ‘thousands of sails competing for release, and hundreds of boats competing for success’. Twitter is also fortunate to be a member of the witness that Chinese games are becoming more refined in content and mature in operation.” Twitter Alan Lan, President of Greater China, said that in recent years, Chinese games have become strong competitors in the global market by virtue of their strong strength. “Hundreds of achievements, and further progress. Twitter believes that in the near future, Chinese game makers will become the leading force in promoting the development of the global game industry.” 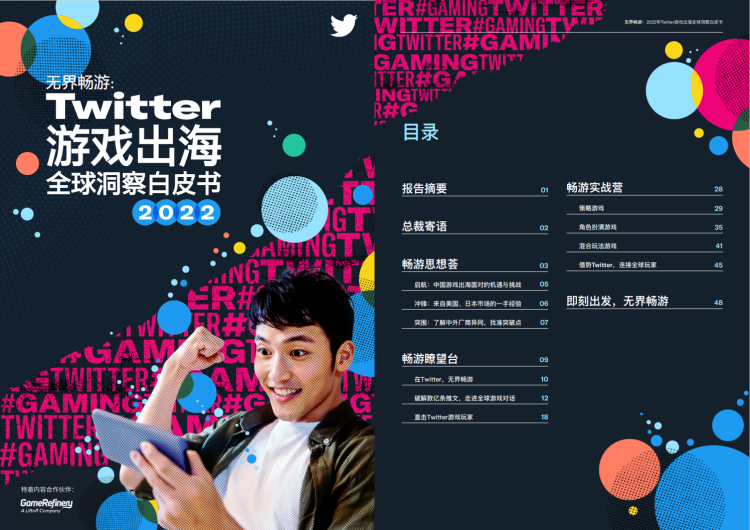 According to Newzoo’s forecast, by the end of 2022, the number of global gamers is expected to exceed 3 billion. In order to help Chinese game companies compete in the world with a more mature attitude, Twitter has invited marketing directors from well-known game manufacturers such as FunPlus, Level Infinite, Yoxing, Adjust, a third-party mobile advertising monitoring partner, and representatives from CyberAgent, Madhouse, Flying Star, etc. In the “Twitter Game White Paper”, game marketing experts from agencies such as Shu Shennuo discussed the opportunities and challenges for Chinese game manufacturers to go overseas in the next five years.

At the same time, the “Twitter Game White Paper” also invites game marketing experts to share their first-hand experience in head markets such as the United States and Japan, aiming to help Chinese companies better “know themselves and their enemies”. In addition, for popular destination markets such as the United States, Japan, and Indonesia, the “Twitter Game White Paper” has researched nearly 100 million gamers and more than 100 game products by digging into hundreds of millions of conversations on the Twitter platform, and cooperated with GameRefinery to provide Chinese game manufacturers. There are many feasible suggestions, which comprehensively cover key links from R&D, design, distribution, and operation.

Precise strikes through Twitter feeds and the player community

The Twitter platform brings together game producers, developers, publishers, players, pan-entertainment enthusiasts and other users of the entire ecosystem of the game industry, and has become an “observation tower” to gain insight into the development and changes of the global game industry. In the first half of 2022, there were 1.5 billion game-related tweets on Twitter, a year-on-year increase of 36% and a record high for the same period. In the past year, the number of independent game content creators on Twitter was close to 100 million, and each independent creator produced an average of 28 game-related tweets, 5 times that of ordinary Twitter users.

For ambitious companies going overseas, it is just as important to be in the moment as to think long-term. Tony Dou, deputy general manager of Twitter Greater China and general manager of the game industry, said, “In-depth market insights, customized and refined brand operations, and strategic marketing planning are already impossible for game manufacturers to go overseas. The rich game ecosystem on Twitter, as well as the comprehensive, one-stop overseas marketing solutions provided by the platform, will help Chinese game makers to travel without boundaries on the road to overseas.”

Twitter is a platform for discussions on real-time global events and hot topics. For more information, please visit https://www.goglobalwithtwitter.com/zh-cn , or scan the QR code below on WeChat, and follow the official account: @TwitterMarketing.

“Unbounded Travel: 2022 Global Insights on Twitter’s Game Global Insights” is a new era guide for China’s game overseas industry compiled by Twitter. Through a combination of quantitative analysis and qualitative research, Twitter provides industry colleagues with an in-depth analysis of the opportunities and challenges of the global market, insight into the characteristics of overseas gamers, and live cases of going overseas. Whether you want to consolidate in mature markets such as the United States and Japan, continue to expand into the Southeast Asian market, or want to focus on a specific category of games such as role-playing, readers can learn and gain inspiration in this guide.

This article is reprinted from: https://readhub.cn/topic/8iA8U0SJoHb
This site is for inclusion only, and the copyright belongs to the original author.