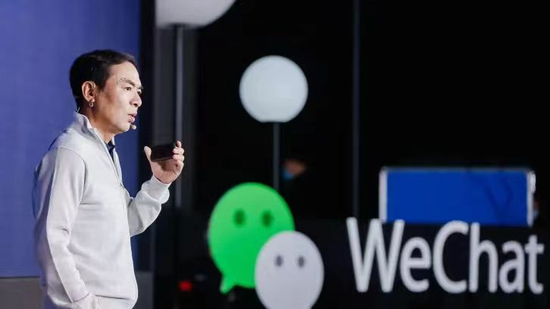 Many content components with over 100 million DAUs have been incubated in WeChat. They all have a common feature. Zhang Xiaolong hoped to become the official website of enterprises in the mobile era when they were launched.

Behind the search for an iterative product of the official website in the PC era, WeChat is always updating the commercialized infrastructure.

2022 is the first year when the video account is officially defined as “atomic”. Under the holding of many online celebrity concerts, the video account user Rihuo got rid of the official account, overtaken the applet, and went straight to the circle of friends, becoming a rare phenomenon-level content component in the WeChat ecosystem for many years. Many people have begun to talk about how much imaginative space the video account can bring to WeChat.

Commercial realization, this is the A side of the video account’s success relying on the huge advantages of the WeChat ecosystem. But on the other side of the glossy, how much will the refreshed video account cost in 2021? Did it really bring new traffic to WeChat? Behind the acceleration, why is the fully commercialized WeChat in such a hurry to realize it?

Perhaps opening the B side behind the A side is the full picture of the rapid growth of the video number.

TikTok has surpassed Facebook, the world’s most trafficked social platform, and has become a new generation of time-killing tools. Zuckerberg has fought back many times over the years without bottom line, and was also named “villain of the year 2021” by American magazine. In the Chinese mobile Internet market on the other side of the ocean, the home base of TikTok’s parent company, a battle for users of short videos and social software is also going on.

According to QuestMobile data, in 2021, in terms of time spent by mobile Internet users, short videos will surpass social software to become the online content consumption track where users spend the most time.

Faced with the shift of network time from social to short video traffic, WeChat has changed its defensive stance in the past. Relying on the blessing of internal ecological traffic, the internal test video account will be officially launched in January 2020. By the end of 2021, the “2021 Video Account Development White Paper” released by the Vision Lighting Research Institute estimates that the video account has reached 500 million DAU, an increase of 79% over 2020.

According to public data, in the field of short video, the Douyin main site officially launched in 2017 reached 500 million DAU, which took about 5 years, and Kuaishou still fluctuates within the range of 300-400 million daily active users.

Not only externally, the growth rate of video account users far exceeds the historical achievements of Douyin and Kuaishou. Even internally, the video account is the leading growth miracle among the main functional components in the WeChat ecosystem.

Take the WeChat mini-program officially launched on January 9, 2017 as an example, the DAU scale of 330 million people in the 2 years since its launch, the DAU scale of the mini-program is estimated to be 450 million people, and the penetration rate in the WeChat ecosystem has reached 40%. . With the same user scale and penetration rate, the video account has reached and surpassed it 2 years after its launch.

Not only that, according to this growth rate, many institutions believe that the video number DAU is expected to reach 780 million in 2022. This means that as a member of the WeChat ecological component, it may only take 3 years for the video account to quickly match the circle of friends that has been born for 10 years.

In addition to maintaining a super-high growth rate in user scale, in terms of the update rhythm at the product level, the video number is also much faster than the iteration speed of other mature content components in the WeChat ecosystem. According to the statistics of Vision Light, 59 product functions will be updated successively in the video account for the whole year of 2021. On average, it is equivalent to at least one new function being launched every week.

Among the new functions that are frequently launched, in addition to connecting more WeChat traffic portals, live streaming and shopping and other functions, the commercialization capability of the video account has been further improved. Held an online concert through live broadcast, completed the first screen-swiping case of “West City Boys”, and was even written into Tencent’s annual financial report in 2021. 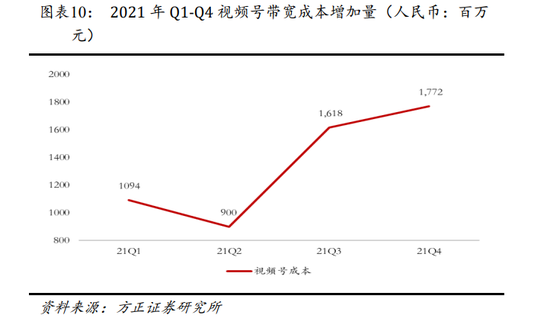 According to estimates by Founder Securities, for the video account of holding multiple long-term concerts in 2021, the Q1-Q4 cost growth this year will be 1.094 billion yuan, 900 million yuan, 1.618 billion yuan, and 1.772 billion yuan respectively. In the short term, for video accounts that are still under commercial exploration, this part of the cost cannot be converted into revenue, which will affect Tencent’s performance in 2021.

However, the new cost of about 5.4 billion is well worth it. It is assumed that the newly added 220 million DAU in 2021 will all come from online concerts and other content that are swiped in the circle of friends. Based on this data, it is roughly estimated that videos in the WeChat ecosystem will be The customer acquisition cost of the No. entrance is about 25 yuan.

Different from the rising cost of user marketing and customer acquisition on short video platforms, the cost of new broadband as a new physical infrastructure for WeChat video content will gradually be diluted and lowered as the commercialization of video accounts is explored. However, the commercialization blueprint of WeChat is far from being solved by one after another online concerts that swipe the screen.

Thanks to several exclusive online concerts, the video account of the Moments has been swiped many times. Although the daily activities of users have increased rapidly, their ability to kill time is obviously insufficient. According to the statistics of the video light, the average usage time of the video account in 2021 is 35 minutes. Compared with Douyin and Kuaishou, the per capita usage time of more than 100 minutes is not small. 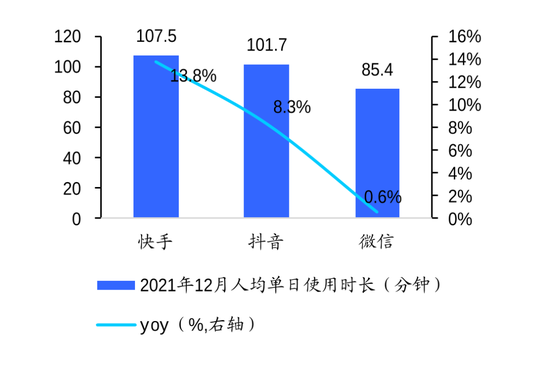 This means that the video account of the screen has not changed the situation that WeChat users’ time is constantly being robbed by short video platforms such as Douyin and Kuaishou. The increase in the duration of the video account is essentially just the redistribution of the time of the original users of WeChat, and does not make WeChat generate a new increase in the duration of users.

In addition to the traffic, look at the connection ability of the video number. Regarding the commercialization of WeChat, Zhang Yong, CEO of Alibaba Group, talked about his understanding in an interview in 2017-WeChat hopes to realize the realization of social traffic through small programs to cut into retail.

Zhang Yong believes: “As a high-frequency application product with a large number of users, WeChat hopes to move from one user system and user ecology to other fields. The idea is beyond reproach. But what connects everything is a physical reaction, and it does not have the chemical reaction required for business. , that is, a reaction from nothing.”

The same statement also appeared in the WeChat Open Course Pro in 2022. In the definition of atomization, the video account team believes that when it becomes an atomized basic content component, it will naturally produce various chemical reactions with all other atomic components in WeChat, which will be used in the entire communication system and social system of WeChat. flow in.

Provides monetization space based on the scenes in WeChat, which is also the main path for the commercialization of content components such as official accounts and mini programs.

Since 2014, the commercialization of WeChat has mainly focused on the opening of advertising spaces in public accounts, circles of friends, and mini programs. However, the growth of the official account has slowed down or even retreated, and the advertisements in the circle of friends are naturally limited.

Since the launch of the Spring Festival in 2015, WeChat has successively opened four advertising spaces in 2018 and 2019. Considering the natural social attributes of Moments, the increase in the ad loading rate will reduce the user experience, so the monetization space of Moments ads is always limited, and the loading volume is difficult to expand further.

The efficient interaction of mini programs and video account components based on public domain + private domain, and the realization of live broadcast, e-commerce, and information flow advertising has obviously become the main space for WeChat commercialization.

Behind the accelerated video account is the imagination of WeChat’s commercialization space; WeChat’s accelerated monetization is the successor of Tencent’s “Half-Life” strategic transformation in the early years.

In the past, the main model of Tencent’s business ecology was “traffic + investment”. The former was represented by social traffic, and the latter was characterized by investment covering almost all Internet tracks.

The TOP 1 mobile Internet usage time of social traffic will be snatched by short videos of killing time in 2021. Against the background of anti-monopoly, the investment strategy has also come to a new turning stage. 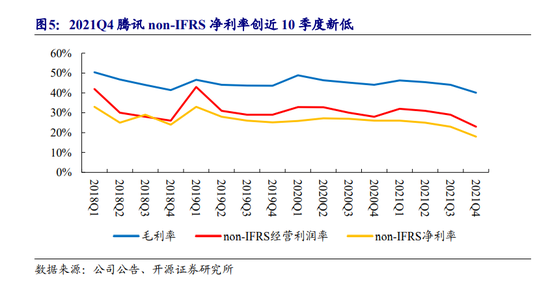 In 2021, Tencent’s net profit attributable to its parent company will be 24.9 billion yuan, a year-on-year decrease of 25%, lower than market expectations, and a record 10 quarters new low.

From the perspective of splitting, the operating level is mainly affected by changes in the market environment such as game business and advertising business, resulting in a slowdown in operating profit growth, but the operating level is still profitable. The actual main reason for the sharp decline in profits is that Tencent’s share of losses in associates and joint ventures has increased.

In other words, the change in the value of Tencent’s investment business is the main reason for the decline in net profit from growth. 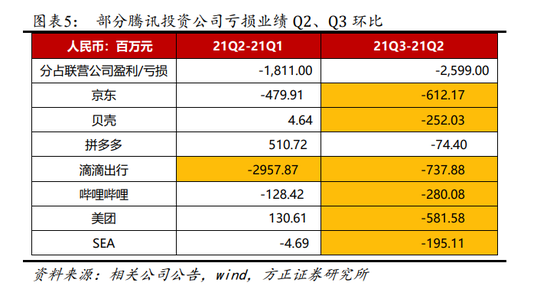 According to the profitability of some Tencent-owned listed companies according to the statistics of Founder Securities, it can be found that Didi Chuxing will cause Tencent’s losses in Q3 2021 to be enlarged; in Q4 2021, Didi Chuxing, JD.com, Meituan, Shell, Bilibili , SEA and other losses together caused the loss to enlarge to 2.599 billion.

Estimates show that Tencent’s investment in Q4 2021 will affect the growth rate of net profit by about 10%. However, although the investment affects the net profit performance, Tencent, which is in the transition stage from the consumer Internet to the industrial Internet, cannot slow down the investment. According to IT Orange data, in 2021, Tencent will still bet on the industrial Internet with a frequency of once a day.

On the one hand, the loss of the already invested consumer Internet has led to a decline in the growth rate of net profit. On the other hand, the transformation stage still requires a large amount of investment to build a moat. As the last gold mine in Tencent’s ecological traffic, WeChat has obviously come to the moment of speeding up mining.

At present, can the full commercialization of WeChat take over “Half-Life” before the completion of Tencent’s industrial Internet transformation and avoid falling into a growth vacuum period? Whether the new ecology established with the video account as the core can make the existing traffic re-enter the state of efficient commercial distribution will play a decisive role.

This article is reproduced from: http://finance.sina.com.cn/tech/csj/2022-04-22/doc-imcwipii5868833.shtml
This site is for inclusion only, and the copyright belongs to the original author.