Please declare the source for reprinting~, this article was published on luozhiyun’s blog: https://www.luozhiyun.com/archives/687

The first time I knew VXLAN was when I saw that the network plug-in called flannel used in k8s has a VXLAN mode, which implements the Overlay Network (overlay network) and can connect all containers together. So in this article, let’s take a look at how VXLAN connects the network between different containers.

Before looking at VXLAN, let’s take a look at its predecessor VLAN. The full name of VLAN is “Virtual Local Area Network”, which is a layer 2 (data link layer) network used to divide broadcast domains, because with the increase of computers, if there is only one broadcast domain, it will There are a large number of broadcast frames (such as ARP request, DHCP, RIP will generate broadcast frames) forwarded to all clients in the same network.

In this context, VLAN technology emerged. This technology can divide a LAN into multiple logical VLANs, each VLAN is a broadcast domain, and the communication between hosts in a VLAN is the same as in a LAN, but the VLANs cannot communicate directly, and broadcast packets are transmitted. Restricted to one VLAN. As shown below.

However, VLAN has two obvious defects. The first defect lies in the design of VLAN Tag. The 802.1Q specification that defines VLAN was proposed in 1998, and only 32 Bits of storage space is reserved for VLAN Tag, of which only 12 Bits can be used. Used to store VLAN IDs. When the cloud computing data center appears, even without considering the requirements of virtualization, there may be tens of thousands or even hundreds of thousands of physical devices that need to be assigned IPs, so 4096 VLANs are definitely not enough.

The second flaw of VLAN is that it is a layer-2 network technology, but information can only be transmitted between two independent data centers through a layer-3 network. With the development and popularization of cloud computing, many businesses need to operate across data centers, so data Passing VLAN tags between centers is a more troublesome thing; and in a virtual network, a physical opportunity has multiple containers, and the number of containers increases by orders of magnitude compared with VMs. Each virtual machine has an independent IP address and MAC address, so the pressure on the switch is doubled.

Based on the above reasons, VXLAN is about to come out.

VXLAN (Virtual eXtensible LAN) virtual extensible local area network adopts L2 over L4 (MAC in UDP) packet encapsulation mode, and puts the Ethernet frame originally transmitted in the second layer into the packet of the fourth layer UDP protocol, and adds its own definition. VXLAN Header. There is a 24 Bits VLAN ID directly in the VXLAN Header, which can also store 16.77 million different values. VXLAN allows the Layer 2 network to expand within the scope of Layer 3, and is no longer limited by the transmission between data centers. VXLAN works on the Layer 2 network (IP network layer), and VXLAN can be deployed as long as the network is reachable at Layer 3 (which can communicate with each other through IP). The entire packet structure of VXLAN is shown in the figure: 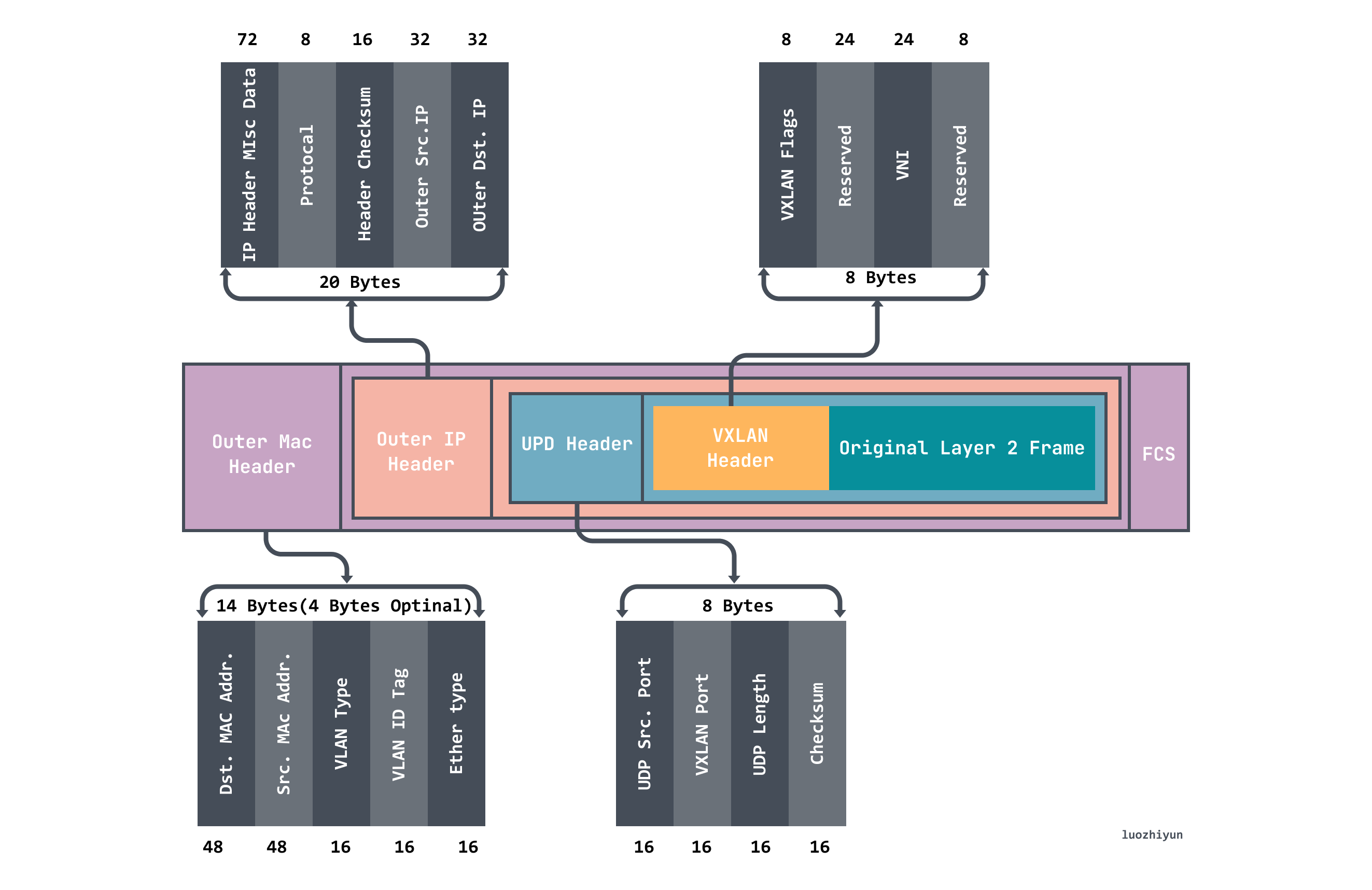 In the figure above, we can see that the VXLAN message wraps the original Original Layer2 Frame:

Let’s take a look at the first communication process to see how VTEP learns: 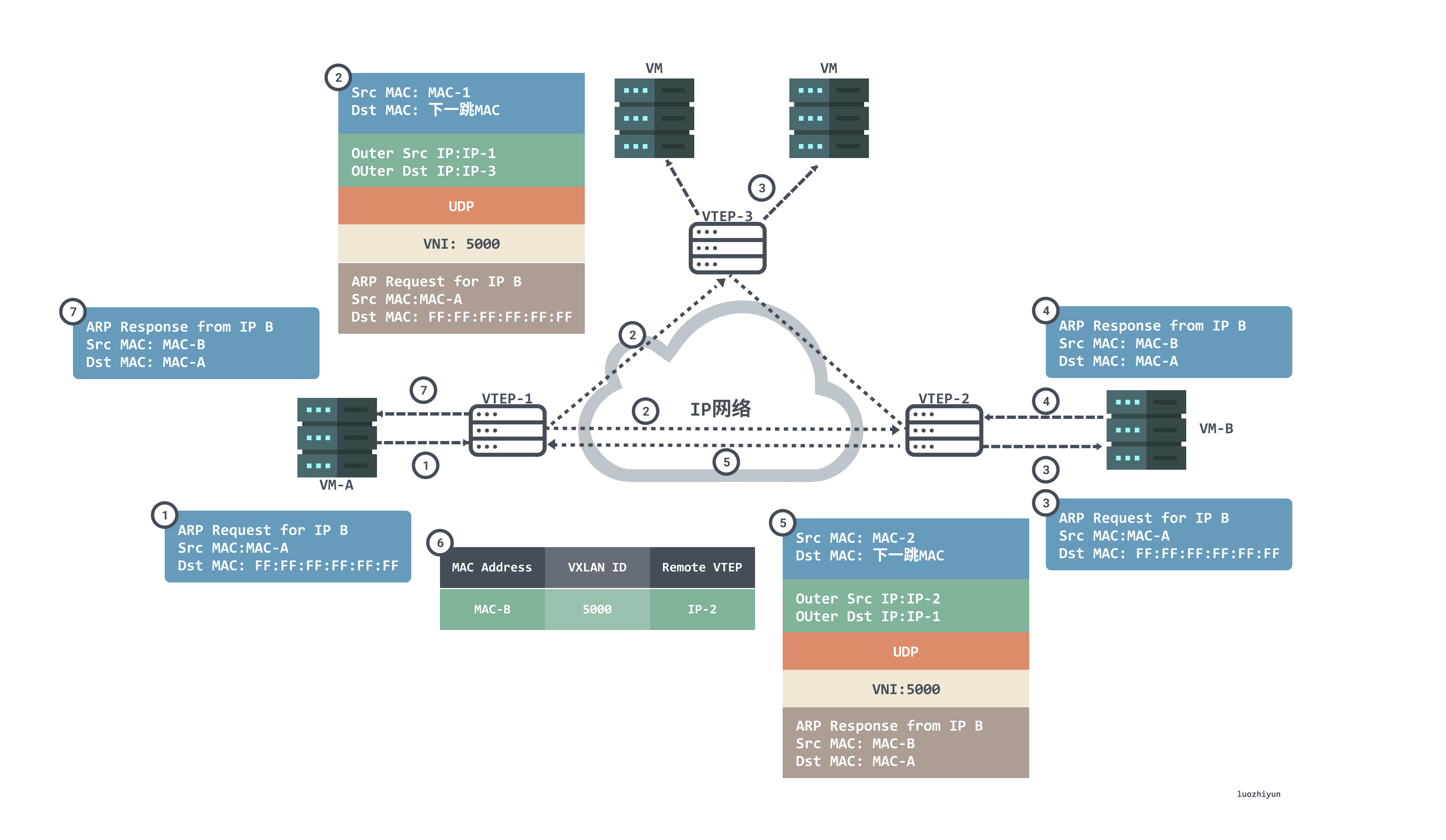 In addition to the above multicast learning method to obtain the mapping relationship of MAC <--> VNI <--> VTEP IP , there is another way, that is, the distributed control center.

For example, the MAC address of VTEP in Flannel’s VXLAN mode network is not learned through multicast, but is synchronized through apiserver (or etcd). When each node creates a Flannel, each node will report its VTEP information to the apiserver, and the apiserver will then synchronize to the listener (Flanneld) on each node that is watching the node api. After Flanneld gets the update message, it will pass the netlink. It is sent to the kernel, and the FDB (query forwarding table) table entry is updated, thus achieving the synchronization of the entire cluster. This apiserver plays the role of a distributed control center, and it is no longer necessary to send redundant requests to access the network to obtain the corresponding mapping information.

Next, let’s make a VXLAN network by ourselves, and then capture the packets to see if it is consistent with the conclusion we have described in the long discussion above. It should be noted that when experimenting on your own virtual machine, in order to avoid unnecessary trouble, remember to turn off the firewall. The centos command is: systemctl stop firewalld

Next, we plan to use docker to conduct experiments. The idea is to create a VXLAN interface on each of the two container hosts, and connect the VXLAN interface to the port of the docker bridge, as shown in the following figure: 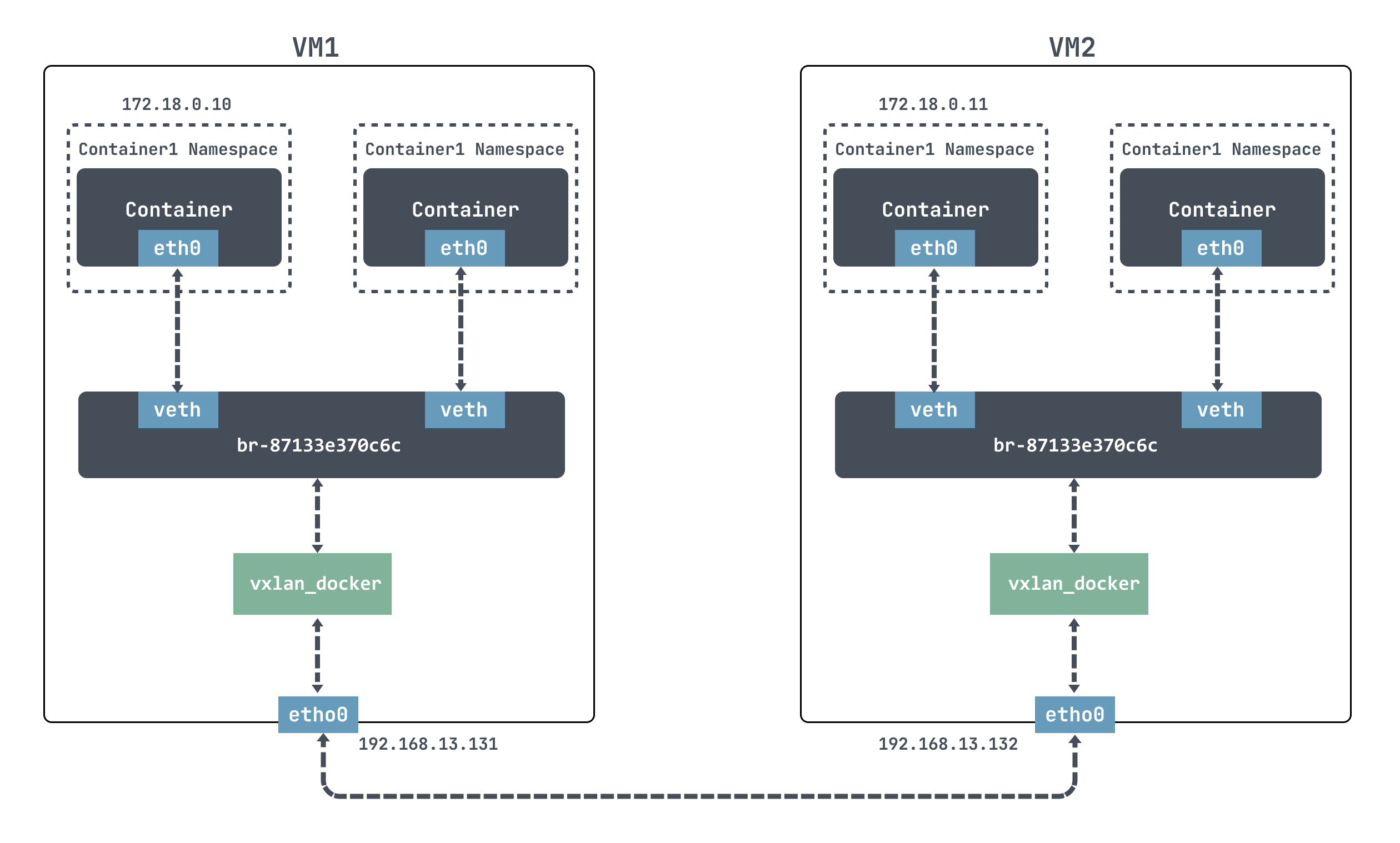 For docker, it is impossible to communicate directly across nodes. We use VXLAN here to simulate cross-node communication.

We can also see that docker created a new bridge for our new network:

Create a new container as follows:

Although we have created the network above, we cannot communicate directly when we go in:

Above, we used ip link add to create VXLAN network interfaces with VNI 200 for VM1 and VM2 respectively, named vxlan_docker; and then use brctl addif to connect the newly created VXLAN interface vxlan_docker to the docker bridge.

Then we entered the container and found that we could ping:

Let’s take a look at the packet capture on the host machine:

In this article, we will start with the introduction of VLAN to describe the disadvantages of VLAN and why there is VXLAN. Then I talked about how the protocol packets of VXLAN are encapsulated, what is the overall working model, and the VXLAN communication process is familiar with how it works. Finally, I used an example to actually implement the interaction between containers on two nodes. communication. I believe that here, you should have a lot of understanding of VXLAN.

This article is reproduced from: https://www.luozhiyun.com/archives/687
This site is for inclusion only, and the copyright belongs to the original author.