In everyone’s memory, “The Last Survivor” itself was the benchmark of the year, and it has undergone a high-definition remake of the PS4 version. No matter how you think about it, it is still a first-class level, and there seems to be little room for improvement. So when we started playing the latest PS5 remake of The Last of Us Part 1, our expectations were not particularly high at first.

It turns out that memory can be glorified.

After using PS5 to run PS4’s “The Last Survivor Remake” and this “The Last Survivor Part 1”, the difference on the screen is very obvious. The modeling and textures of “The Last of Us Part 1” are completely remade to the standards of the next generation. With more advanced light and shadow effects, the “realism” of the picture is much higher than the original version, and the details of the character’s face and hair Also more refined.

In addition, some scene destruction elements have been added to the PS5 version to make some powerful guns and explosives more visually impactful, just like the screenshot below: 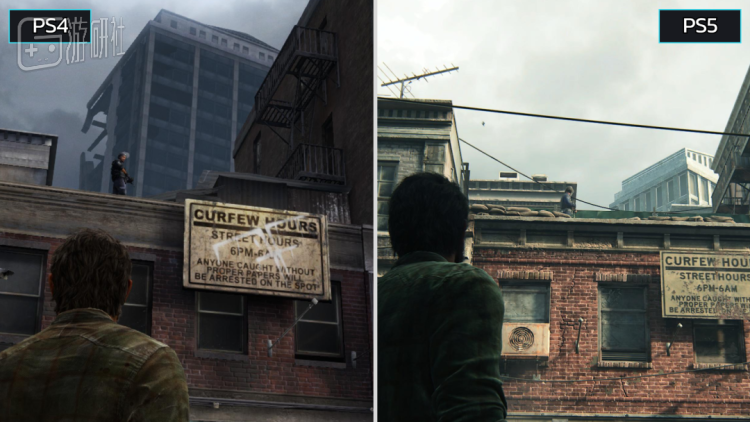 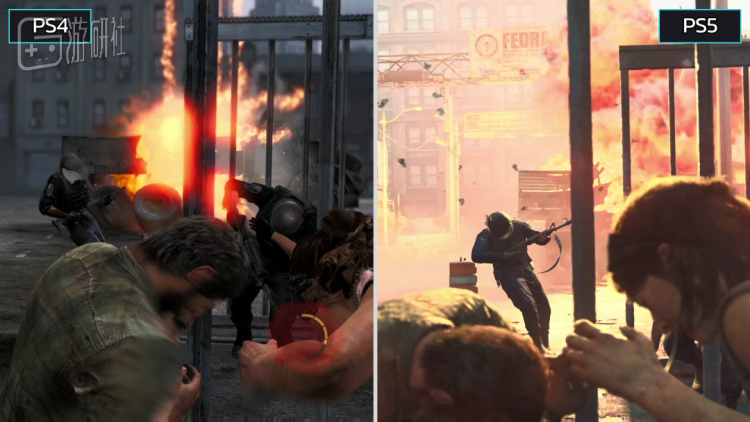 Compared with the evolution of conscience on the screen, the more important change in “The Last Survivor Part 1” is that it still provides a series of barrier-free auxiliary functions, including screen reading, color weakness optimization, etc. Players who are difficult to play large-scale 3D games normally can also enjoy the fun of the game.

Although these functions have been well received in the 2nd generation, it seems that it is difficult for players with relatively healthy bodies to appreciate their effects, so this time we invited an editor with 700 degrees of myopia (and 100 degrees of astigmatism) A Qiang took off his glasses and sat at a position about two meters away, simulating and experiencing an amblyopia player.

According to Ah Qiang’s description, at this degree, he can’t see the facial features clearly when he sees a face 1 meter away. As for the TV screen two meters away, it is even more blurred.

The picture that A Qiang sees is probably like this

The screen reading function of “The Last Survivor Part 1” is very powerful. It can read all the text on the screen except for the dialogue subtitles by an AI-synthesized mezzo-soprano in smooth Mandarin.

For example, “options”, “continue the game”, “○ key, cancel, × key, confirm”, and even when you just open the game, you can hear a sentence “please press any key”.

It doesn’t matter if you can’t see the HUD’s health and ammo volume, as long as you swipe up the touchpad, you can hear the AI ​​lady kindly remind you in standard Mandarin with a broadcast accent: “You are now crouching in a low position. Behind the bunker, with 80 HP, holding a 9mm pistol, 4 rounds of ammunition in the magazine, and 8 spare rounds of ammunition”, so that passing colleagues mistakenly thought we were watching the news broadcast on PS5.

There are not only voice prompts, but also special prompt sounds when the character approaches an item that can be interacted with. According to the different interaction options, the prompt sounds are also different. After playing for a while, Mr. A Qiang introduced to us like a lot: “This sound is the triangle key, if you hear this sound elongated and echoed, That is to press and hold the triangle button. As for this sound effect that sounds a bit negative, it should be that I am standing on the edge of the table, and the system reminds me not to stumble and fall.” 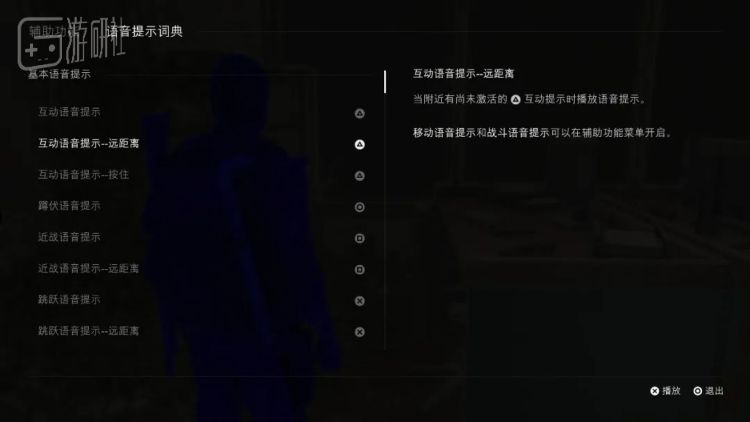 However, Teacher Ah Qiang quickly fell into the classic philosophical questions of 3D video games: “Who am I”, “Where am I”, “Who is hitting me”.

As an adventure game with horror elements and realistic graphics, “The Last of Us” has many scenes with low visibility, and this time, the more enhanced graphics and light and shadow experience make some dark details need to be Players carefully observe and distinguish. For Teacher Ah Qiang, who was looking at flowers in the fog, let alone the details in the dark, the backlit place of the scene was as unfathomable as a black hole, so that he could not even see the door two meters away in some scenes.

Fortunately, just swipe the left side of the trackpad with your finger to turn on the high-contrast mode in Accessibility. In this mode, all non-interactive background elements are displayed in black, while objects that are meaningful to the player are displayed in blue, red, or yellow depending on their positioning.

Whether it’s the old sixth sound follower squatting in the corner, or the supplies hidden deep in the shelf, there is nothing to hide in this mode.

In addition, press the left joystick at any time in the game, the camera will automatically turn to the direction of the next plot, and a white arrow will be marked on the screen. When you don’t know what to do, just keep pressing the left stick and pushing it forward, and the character will go in the right direction.

Coupled with auxiliary functions such as automatic running of characters in specific plots and automatic crossing of obstacles when encountering obstacles, some forced chase and escape plots that everyone thought would be difficult have also passed without any risk. 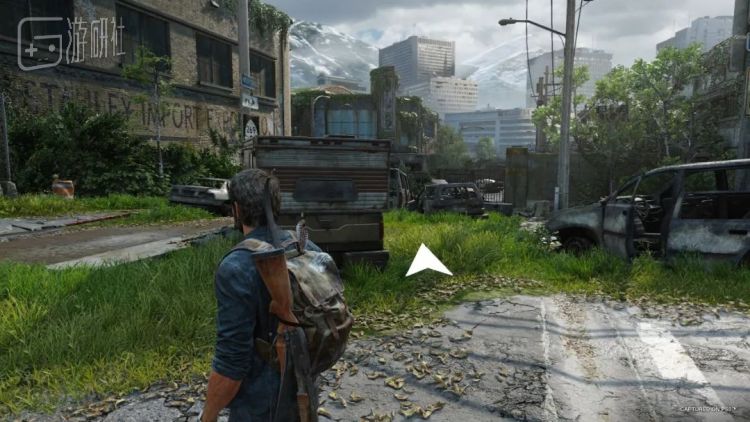 As for the scenario solving, the puzzle solving in The Last of Us is not difficult, even so, we have heard the AI ​​female voice’s intimate reminder “this puzzle may not be suitable for all players, you can use the ‘jump’ in the options” Over Puzzle ‘Function’.

“The Last Survivor” has a lot of battle links. Qiang, who took off his glasses, basically could only vaguely see a white ball in the place where he aimed.

During the battle, the game provides two “plug-in-level” auxiliary functions of aiming lock and opening the mirror and slow motion. Press the aiming button, and the crosshair will automatically stick to the nearest enemy, and the game will also enable slow motion to slow down the time to give players more time to fine-tune. According to Mr. A Qiang’s description, even if it is myopic state that can only see a cloud of red fog, with a good muscle memory, you can still hit a lot of random headshots. If you only want to hit the body, you can achieve a hundred hits. .

Just when I thought this was exaggerated enough, Mr. Aqiang showed me another sneak peek.

The auxiliary function under stealth not only has an enhanced listening mode, but also an extremely exaggerated stealth function. Under this function, as long as you press and hold the circle button, Joel will enter a powerful stealth mode of “no one can see me”. It can even be used in battle, so that the enemy who was rushing aggressively one second, looked around with a puzzled face the next second, completely ignoring Joel, who was funny squatting 1 meter in front of him.

“This function is a bit like opening the door to save lives,” said Mr. Aqiang. “Sometimes the scene is so chaotic that I can’t see anything clearly. Just enter this almost invincible stealth mode and you can calm down and think slowly.”

Various fragmented information in the game is also an important part of the plot. Various documents in the game often add some important dark lines, and the sideline dialogue with Ellie in the scene also provides a lot of details of characterization, and the auxiliary function takes these into account.

A high-contrast mode and interactive beeps keep players from missing document collections on the road, while a screen-reading feature brings content to life without the player being able to read the text. On the PS5 platform, you can also turn on the function of “vibration simulation voice”, simulate the tone of the character through the slight vibration gap of the DualSense handle, and increase the sense of substitution through the sense of touch.

The navigation assistance will guide the player to the trigger point of the branch plot first, so you don’t have to worry about missing the dialogue and plot, which is very considerate. 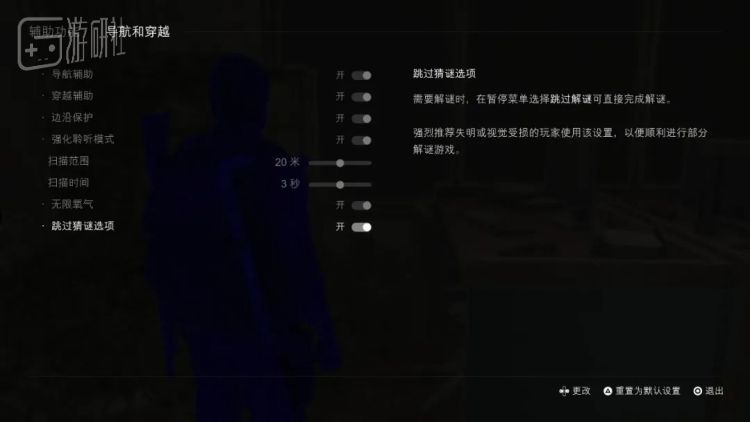 There are also some game accessibility features that we are not very good at testing. For example, players with 3D dizziness can turn on specific functions in the game and place a crosshair in the center of the screen as the reference point of the player’s line of sight to reduce the feeling of dizziness.

These functions are not just pretending, each one has been carefully polished, and a wealth of customization items have also been prepared according to the needs of different players. The production team sincerely hopes that through these auxiliary functions, as many players as possible have the opportunity to experience the fun of the game.

Maybe for the average player, the accessibility features in the game seem a bit too much, and sometimes even make people feel stupid. For example, the function of cutscenes narration, in cutscenes, the narrator will use a very flat tone to narrate “Joel looked at Ellie and shook his head helplessly”, “The soldier raised his gun and aimed at Joel”, etc. , often undermining the tension the game has painstakingly created.

But for many people with disabilities who have lost all five senses, this is the only way they can connect with the world. When describing the game experience, A Qiang smiled bitterly and said: “If you want to say, it does feel a little like being taken by the system. The planning of the stealth route and the detailed resource management are all empty talk. But if you don’t Give me the glasses back, it’s probably the only big game I can play.”

And we have interviewed some disabled players and learned that many people may not even be able to expect such a gaming experience.

We are also very happy to see that in recent years, more and more games at home and abroad are paying attention to the barrier-free design, providing a wealth of auxiliary options so that more people can experience the fun of the game, and the exploration of Naughty Dog is obviously is at the forefront. Unfortunately, “The Last of Us Part 1” does not have Chinese dubbing. In addition to the functional screen reading, the narration and dialogue are still in English, which is still a big threshold for domestic disabled players. I also hope that in the future, there will be more game development teams that can take care of the needs of Chinese disabled players.

This article is reproduced from: https://www.yystv.cn/p/9699
This site is for inclusion only, and the copyright belongs to the original author.