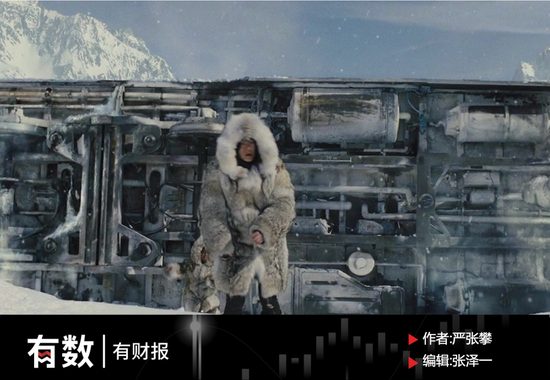 On August 11 this year, Lei Jun recalled the past at the press conference. He remembered two “failures”. The first was the failure to develop “Pangu” during the Jinshan period. And then by the way, I talked about how to get through the trough.

Looking at the rearview mirror, what Lei Jun may want to say is that even if he goes into a trough, he still has the “confidence to cross”.

After all, in Xiaomi’s financial report released on August 19, in the first half of this year, Xiaomi’s net profit fell by as much as 83.5% year-on-year, and mobile phone sales fell by more than 20% year-on-year for two consecutive quarters.

Unfortunately, at the end of the speech, Lei Jun did not give how he crossed the trough. 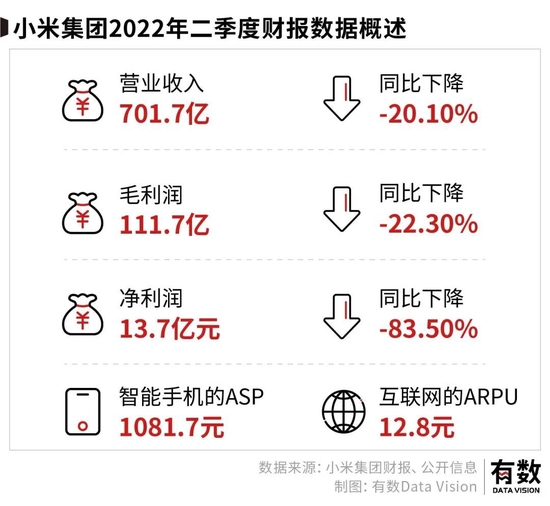 Everything that can go down goes down

In June this year, OPPO took out 800 million and Xiaomi took out 1 billion to support this unprecedented super 618 promotion. The effect was remarkable – the only growth in the domestic mobile phone market in the first half of this year occurred in that month – out The shipment volume reached 28.017 million units, a year-on-year increase of 9.2%[4].

In contrast, domestic mobile phone shipments in the first half of this year were 136 million units, down 21.7% year-on-year. 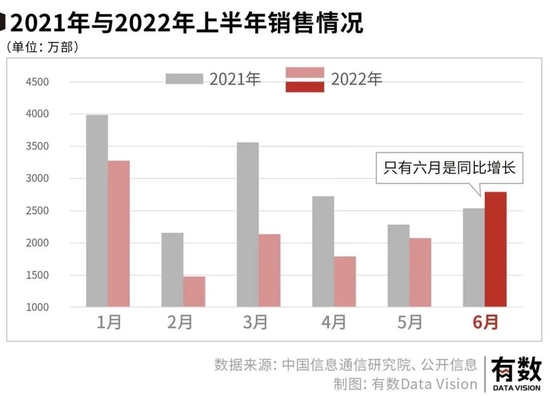 The first to feel the cold winter of consumer electronics were the owners of mobile phone stores on the street. Some people plan to give up the position of store manager and start preparing for the civil service exam[2]; a mobile phone dealer who has been in the business for more than 20 years claimed that nearly half of its mobile phone stores have been closed in a northern province where he is located[3]; JERUSALEM — In Huaqiangbei, a number of mobile phone stores are also facing closure.

Xiaomi is also one of the many who cut orders. The reason for cutting orders is no different from that of other manufacturers-the decline in mobile phone sales. In the first half of this year, global sales of Xiaomi mobile phones fell by 24.7 million units year-on-year, a year-on-year decrease of 24.1%.

However, the problems encountered by Xiaomi are not only explained by the bad environment.

First of all, compared to the market, Xiaomi is obviously oversold. According to the second-quarter report released by market research firm Canalys, global smartphone shipments fell below 300 million units due to the economic downturn, a year-on-year decrease of 9%. As the world’s top three mobile phone manufacturers, Xiaomi’s decline was 2.7 times that of the global market.

In the last article about Xiaomi, we explained Xiaomi’s business model in detail. In short, Xiaomi takes the mobile phone as the starting point, constructs an ecological chain through IOT devices, strengthens the user experience, builds a complete closed-loop traffic, and finally realizes the monetization through Internet business.

Therefore, the coldness of the mobile phone business also directly led to the first year-on-year decline in the IOT, consumer and Internet business. The decline of the three major businesses finally made Xiaomi’s net profit in the first half of the year slashed by the ankle, which fell by more than 90% compared with the first half of last year.

As the saying goes, when the tide goes out, we know who is swimming naked. Now that the water in the swimming pool has been drained, Xiaomi’s predicament is exposed at a glance. 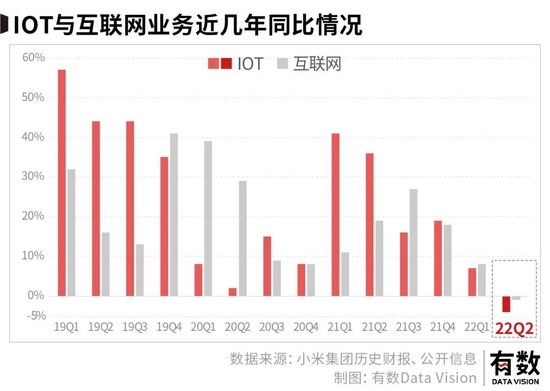 In this year’s speech, Lei Jun mentioned that he faced Microsoft for the first time when he was in Jinshan, and fell into confusion, so he took a break and adjusted for half a year. In that frustrated half year, what Lei Jun did the most was to go to bars, and in the depressing environment of the bar, he fell in love with rock music.

I wonder if the net profit of Ankle Slash will increase Lei Jun’s love for rock music?

Inside the mobile phone market

For mobile phones, and even the entire consumer electronics industry, the only source of excess profit is differentiated features and experiences. Mobile phone upgrades these days are nothing more than the same old days—faster CPU processing, an extra camera, a 0.1-inch larger screen, and a few minutes faster charging.

Behind this phenomenon is that in the past few years, the mobile phone industry has been in a stage of slow technological innovation. Without major innovation, major mobile phone manufacturers, if they want to differentiate themselves, can only keep rolling the chip, rolling the camera, rolling the screen all the way to the charger.

The first is the chip that determines the performance of the mobile phone. In addition to Qualcomm, everyone chooses MediaTek. The second is the camera. After Huawei introduced Leica to shoot stars, everyone is rushing to use it. The last is the screen. Samsung, LG four inside the circle.

Not to mention the Android system that everyone is using.

These mobile phone parameters, which are used as core selling points, all come from upstream suppliers, and high prices have not brought high gross profit to mobile phone manufacturers.

The only survivor of this involution is Apple. The reason why Apple survived is also because of the obvious differentiation – self-developed chips and self-developed systems, others can’t buy them.

The huge differentiation advantages brought by the two have been converted into high-end mobile phone market share. In the global market, Apple’s share of high-end machines has further increased, from 57% to 62%; in the domestic market, it has increased from 43% to 46%.

Going back to Xiaomi itself, why is the mobile phone market not good, and Xiaomi is the one that is oversold?

The inspiration given by Apple is: the differentiation is not enough, and the rich are unwilling to buy it.

The essence of brand high-end is to acquire high-end customers. And high-end is also the goal of Xiaomi. To achieve this goal, Xiaomi played two cards.

The first card is to acquire high-end customers by offering high-end pricing.

Take the new Xiaomi Mi 12S Ultra released in July as an example. The CPU used is the Snapdragon 8+ Gen 1, one of the best processors at the moment. The screen uses an OLED curved screen, and the camera uses Leica. Top-of-the-line sales.

The price of 6999 yuan is reasonable, and then when Lei Jun reviewed this product in his speech in August, he did not mention sales at all.

Moreover, in the past few years, Xiaomi has also launched a number of high-end price mobile phones. Since Xiaomi Mi 10, the price has stood at 4,000 yuan, but sales have not achieved substantial breakthroughs.

But judging from Xiaomi’s latest MIX FOLD 2, although the price is nearly 10,000 yuan, but in terms of splitting, more sources of high prices are still the Snapdragon 8+ developed by Qualcomm, the optical camera developed by Leica, and the Eco developed by Samsung. The inner screen made of OLED, not the self-developed rotating shaft in the form of micro water droplets.

After the two cards are played, the average shipping price is still hovering around 1,000 yuan. 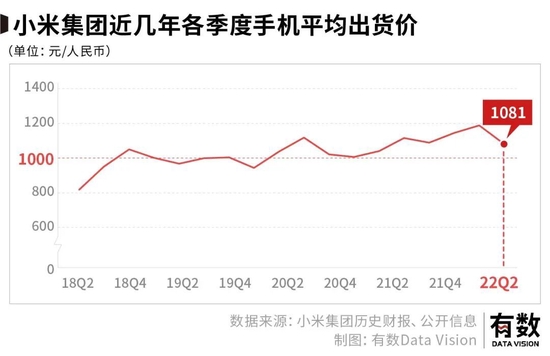 The unit price that has not been able to break through for a long time shows that the mobile phones that Xiaomi consumers like to buy have always been 1000 yuan phones, not high-end and high-priced flagship phones; and the sudden linkage shows that price cuts can encourage them to repurchase of.

What the two convey together is that the existing customer base is very price-sensitive – that is, it is difficult to sell high-priced products to current consumers.

High-end is the road that Xiaomi has to take. For Xiaomi’s business model, after the high-end mobile phone business, it means that there will be customers with better payment ability to enhance the monetization ability of the Internet business.

How to improve the monetization ability of the Internet, Apple will bring more inspiration to Xiaomi. The fruit fans behind Apple are those “selling kidneys” who also want to buy a 10,000 yuan iPhone.

The strong willingness of customers to pay is reflected in the report that the ARPU of Apple’s Internet business is about 164 yuan.

The answer given by the consumers behind Xiaomi is that the ARPU in the latest quarter is only 12.8 yuan.

So what if Apple cut prices and entered the hinterland of Xiaomi? You must know that vivo, which has the largest market share in the low-end market, is eyeing it.

Oh, and the folding screen, which Apple hasn’t done yet.

This article is reproduced from: http://finance.sina.com.cn/tech/csj/2022-08-30/doc-imiziraw0385786.shtml
This site is for inclusion only, and the copyright belongs to the original author.