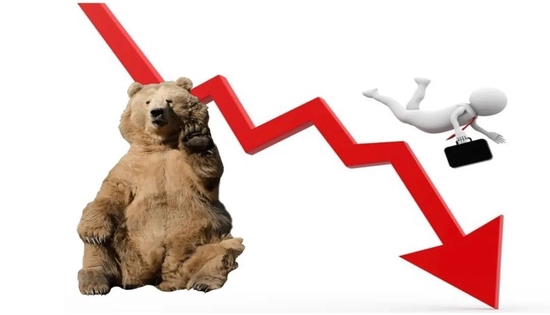 When the cold winter is approaching, it is the most important thing to hold your wallet tightly and hold on to your work.

In the past 48 hours, the news from the capital market and the technology workplace has shocked many people.

On one side is the stock market, which is full of sorrow, and the Asia-Pacific, European and American stock markets have fallen. Yesterday, after the S&P 500 fell by 3.9% in a single day, US stocks have fallen by more than 20% from the high point in January this year, marking the official entry of US stocks into a bear market.

On the other hand, the battle situation in the currency circle is even more tragic, and almost all cryptocurrencies are diving straight. Bitcoin and Ethereum have fallen by about 20% and 30% respectively in the past 48 hours. Looking ahead, the entire cryptocurrency field is a sea of ​​red. As of now, the total market value of cryptocurrencies has fallen below $1 trillion, hitting a new low in nearly two years.

While the capital market was bloody, bad news came again in the technology workplace. Following Tesla’s previous layoffs, tech star Coinbase announced this morning that it will lay off 18% of its workforce, effective immediately. Its CEO made it clear that the crypto winter is here and believes that the recession will likely last for a long time.

｜1,000 people lost their jobs, Coinbase has “prepared for the worst”

This morning, US time, Coinbase CEO Brian Armstrong published an open letter on the official website. In the letter, Brian said that in the past month, the management team of Coinbase has conducted many discussions on the current general environment and company situation, and reached the following conclusions;

First, the economic situation is changing rapidly. After nearly 10 years of prosperity, an economic recession is taking place, which will also lead to the arrival of the crypto winter; Second, in such a large environment, the cost of managing the company becomes particularly important; Third, Coinbase has overhired over the past year, from 1,250 employees in 2021 to about 5,000 today, and Coinbase needs to correct the problem of over-expanding personnel.

Based on the above considerations, Coinbase has made a decision to lay off 18% of its workforce, involving about 1,000 employees, so as to ensure that Coinbase can operate healthily in the worst period. 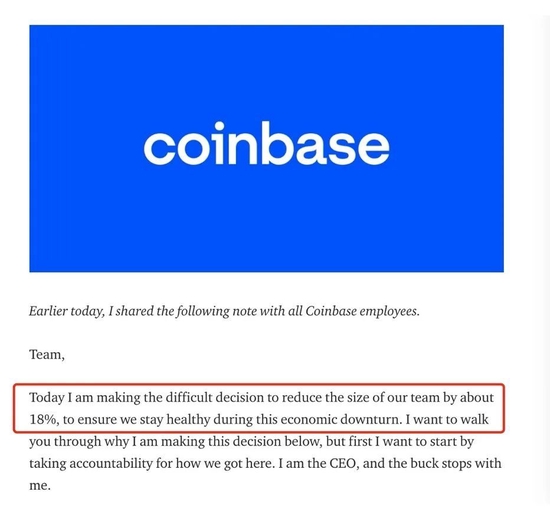 The picture is taken from the official website of Coinbase

In fact, before the announcement of the layoffs, Coinbase’s “tear offer” incident had already spread, and now it seems to be a sign of this large layoff. About two or three weeks ago, people kept breaking the news that they successfully passed the Coinbase interview and got the offer, but when they were about to join the job, they suddenly received news that Coinbase had withdrawn the offer, but they had already completed the resignation procedures of the former company. Or rejected offers from other companies, and now have to face the unemployment crisis.

This kind of temporary withdrawal of offers has been extremely rare among major companies before, and it is not difficult to see that Coinbase’s layoff plan was carried out very hastily. But before that, most employees did not feel that the company is currently in a crisis, because just a month ago at the earnings conference, Coinbase CEO Brian just said that the company will continue to invest and expand, sending a positive signal .

The news shows that the layoffs of Coinbase involve a large number of engineers. Immediately after the layoff news was released, the company privileges of these employees were all cut off. At present, some laid-off engineers have begun to ask for help on the forum.

But in terms of layoff compensation, Coinbase is still more generous this time. Including a minimum 14 weeks severance pay, an additional 2 weeks will be given for every 1 year of employment. In addition, the company will continue to pay employees four months of insurance premiums and four months of mental health support, while also promising to help laid-off employees find jobs.

｜The collective limit diving of the currency circle, the encryption field is full of crises

The largest digital currency exchange, the layoffs of Coinbase can be said to be closely related to the recent blood collapse of cryptocurrencies.

The cryptocurrency sector has seen a staggering decline over the past six months. Various previously hyped cryptocurrencies, such as Dogecoin and Shit coin, all collapsed, and among them, there is no shortage of instant zeroes like Luna. Even Bitcoin and Ethereum, the two cryptocurrencies with the largest market capitalization and trading volume, could not escape the fate of plummeting. Among them, Bitcoin fell by more than 54%, and Ethereum fell by about 70%.

In the past two days, Bitcoin once hit the $20,000 mark and Ethereum hit the $1,000 mark. It only took two days to complete the nearly one-year increase. Hundreds of thousands of overseas coin speculators exploded in this round of slump, and hundreds of billions of wealth evaporated instantly. 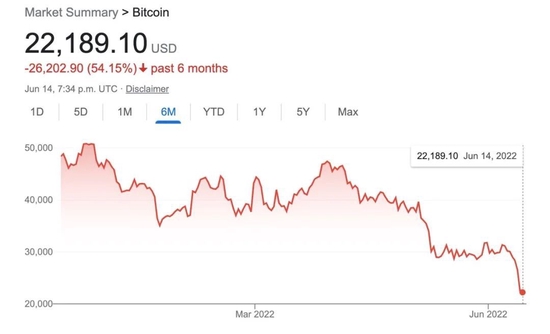 At present, the free fall of cryptocurrencies is mainly due to the superposition of several reasons.

First, the economic environment is sluggish. After the inflation data repeatedly hit new highs, the market’s hawkish interest rate hike expectations from the U.S. central bank have risen. The entire capital market is in a precarious state, and cryptocurrencies, as high-risk assets, bear the brunt of the impact. Second, the previous Luna zeroing incident once again exposed the extremely high risks in the encryption field, causing some funds to flee in panic. Third, there are signs that governments around the world are speeding up the formulation of relevant policies to strengthen the constraints and supervision of the crypto market.

In addition, there is a direct fuse that caused the two-day plunge, that is, the encrypted lending platform Celsius suddenly announced the suspension of all withdrawals, transactions and transfers on the platform in the past two days. Many people worry that Celsius’ thunderstorm will become a “Lehman moment” in the crypto space, which will accelerate the bursting of the entire crypto market bubble, causing panic in the entire market.

In simple terms, Celsius is equivalent to a bank in the encrypted world, and its business model is basically similar to that of a real bank. Absorb users’ “encrypted deposits” through interest rates, and then release these funds through loans, investments, etc. to earn the interest rate difference between the two ends.

However, unlike real banks, which are regulated by various policies and institutions, these “banks” in the current crypto world are all very wild. In order to attract deposits, Celsius is offering users a very tempting reward: deposit cryptocurrencies to get an annualized rate of return of up to 18.6%, and weekly dividends.

Does this route sound familiar? Yes, it is very similar to the Anchor mentioned in the Luna crash we analyzed. They use high investment returns to attract funds, and then use the funds to invest and pledge to obtain high returns.

This model may work well in a bull market, and users and institutions can make money, but once the market is bad, a run will be devastating to the entire system. And Celsius is the case again this time.

It is understood that there is only about 27% liquidity in Celsius’ asset pool, and more than 70% of the other assets are all used for investment and pledge, but at the same time it allows users to redeem assets at any time. This also caused Celsius to not have as much money to pay when users started to withdraw in large numbers under the recent negative market sentiment.

Then Celsius started the HOLD mode to suspend users’ transactions, and then began to sell Bitcoin, Ethereum and other assets in large quantities in the market, while opening large-scale mortgages. 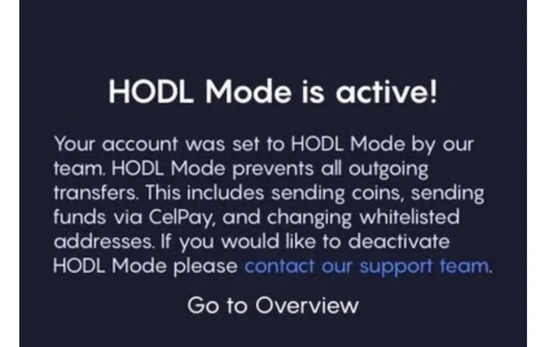 After this operation, the prices of Bitcoin and Ethereum fell, and the user side became more panicked, and a large-scale run began, which caused Celsius to suspend all transaction requests on the platform. If the crisis is not properly resolved, then we may soon see another death spiral.

In the past two years, the overseas encryption market has developed rapidly, but as a whole, there is no regulatory supervision, no consumer protection, and no net capital requirements. The entire crypto space isn’t just the Wild West, it’s in a state of financial anarchy with plenty of grey areas.

On Reddit forums, investors are already discussing what to do if their Celsius assets are wiped out, and some even posted a link to a suicide prevention hotline. Seeing such a tragic experience for overseas leeks, many people also sighed with emotion. Thanks to China’s strong supervision policy, ordinary people in China have avoided this turmoil.

｜ “Bear” is here, just knocking on the door

In fact, not only people in the currency circle have suffered heavy losses recently, but U.S. stocks are also mourning. 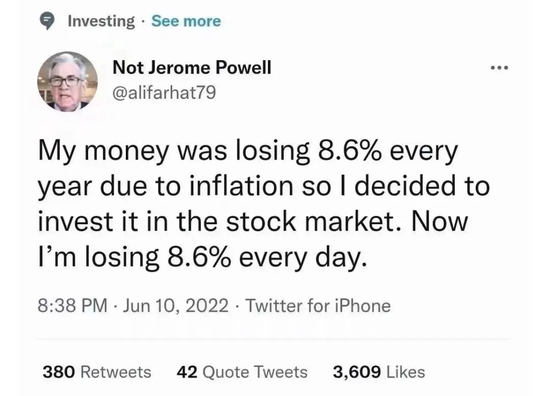 The picture comes from Twitter, the copyright belongs to the original author

After Monday’s rout, U.S. stocks officially entered a bear market with a decline of more than 20%. Compared with the black swan bear market caused by the epidemic in early 2020, this bear market seems to be more ferocious and market expectations are more pessimistic.

According to statistics from the New York Times, since World War II, including this time, there have been 12 bear markets in the U.S. stock market. On average, it takes 13 months for a bear market to go from peak to trough and 27 months to return to breakeven. The biggest drop since 1945 came during the 2008 economic crisis, when the S&P 500 fell 57%.

History shows that the sooner indices enter a bear market, the faster they tend to recover. During the last black swan of the new crown epidemic, it took only 33 days for US stocks to enter the bear market, but it took 148 days to return to the pre-epidemic level.

The current bear market has gone through 161 days since the high point fell, but the impact of high inflation, interest rate hikes and balance sheet reductions, the war in Ukraine and the epidemic is still ongoing, and has even just begun. Therefore, many analysts believe that the current decline is not deep enough, the market has not yet bottomed, and an economic recession is likely to come.

Although many people are reluctant to face it, the fact is that the capital winter is approaching. Not long ago, Sequoia sent a letter to the founders, saying that the most severe moment has come, and this time the economy will not reverse in a V-shaped manner like the new crown epidemic.

At the end of the report, it reads: Taking a fluke is a waste of time, don’t sit together and discuss the good old days and expect it to come back. This is an era of controlling change amid uncertainty, and learning to “survive the fittest” is everyone’s job at the moment.

This article is reproduced from: http://finance.sina.com.cn/tech/csj/2022-06-15/doc-imizirau8524700.shtml
This site is for inclusion only, and the copyright belongs to the original author.