ByteDance lobbying Washington to spend more than Huawei in first half

Chinese tech companies wanting to do business abroad are making lobbying in Washington the norm.

For foreign companies, Washington is a power labyrinth: When a business encounters regulatory problems in the United States, it needs a guide, straightening out the intricacies of laws and policies, and even helping company executives and executives in the U.S. federal government and Congress have lunch interviews. Create opportunities to solve problems.

In 2019, TikTok was targeted by the US government, and the parent company ByteDance followed suit and began lobbying. In the first year, it spent $270,000, hired 17 lobbyists, and visited agencies including the Commerce Department and the White House Office to reverse the unfavorable situation. In the second year, the cost is expanded tenfold. It now surpasses Huawei’s total spending over the past ten years in one fell swoop. (He Qianming) 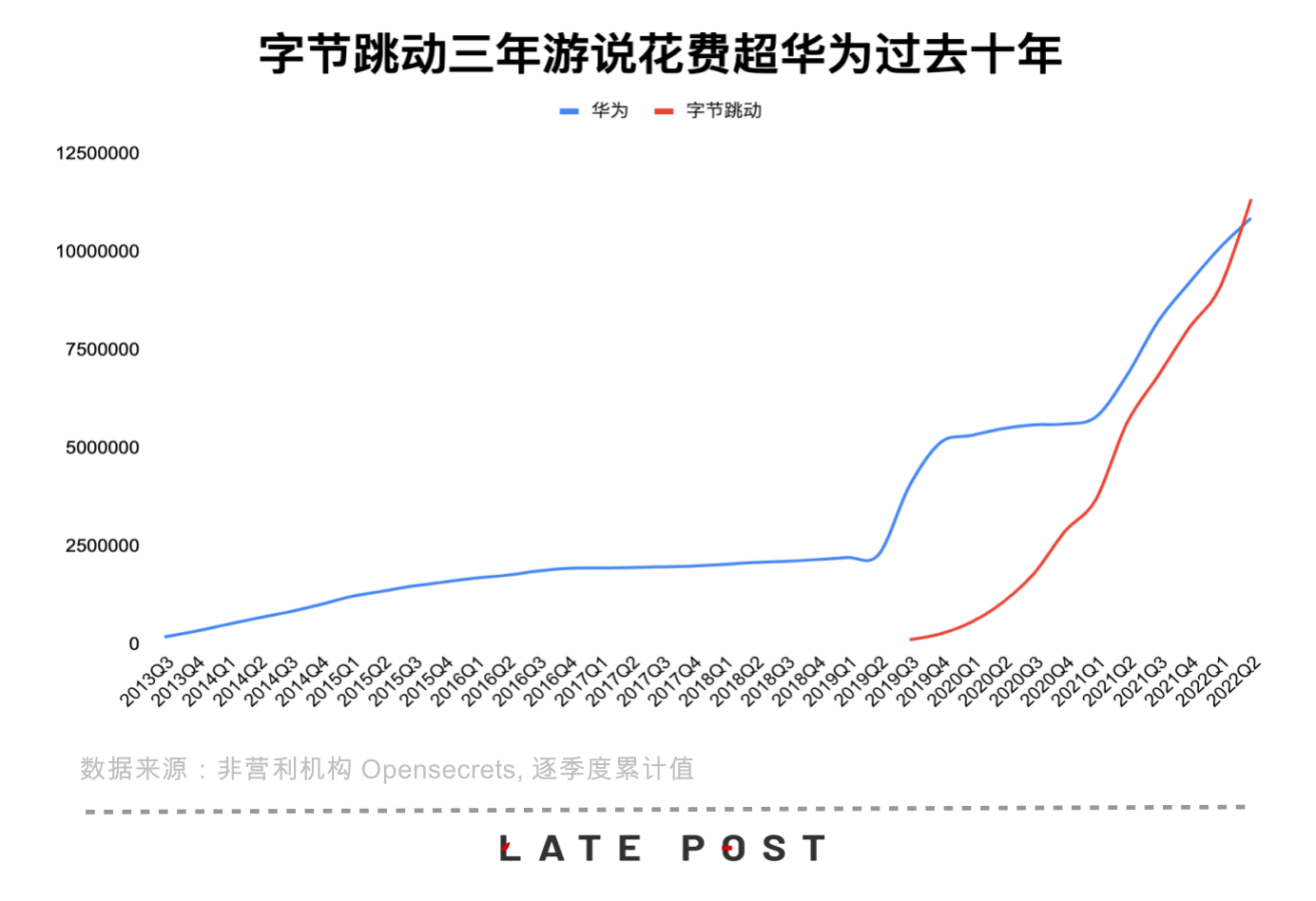 More than half of MicroStrategy’s outstanding shares were shorted, with a short-selling rate of 51% and a notional value of $1.35 billion, according to short-selling research firm S3 Partners.

MicroStrategy has borrowed billions of dollars to buy bitcoin in bulk. As of June 28, the company held a total of 129,699 bitcoins at a cost of about $3.98 billion, or about $30,664 per bitcoin on average.

Global chip subsidies will exceed $500 billion in the next decade

Chips have been placed in an unprecedentedly important position. The European Union and the United States passed their respective “chip bills” this year, and China, Japan and South Korea have also continued to increase their support for the chip field. According to statistics from some institutions, the scale of chip subsidies announced by many countries around the world will reach 500 billion US dollars.

China’s overall goal in chip subsidies is to achieve 70% chip self-sufficiency by 2025. According to industry body SIA, China’s total investment in the chip sector from 2014 to 2030 exceeds $150 billion.

In recent years, the global chip market share of the United States is only 12%. In order to improve the status of the United States in the chip industry, the “Chip Act” passed by the Senate last month plans to provide about 77 billion US dollars in subsidies for the chip industry. In our report, we have sorted out the whereabouts of the funds currently disclosed by this bill.

South Korea’s share of global chip manufacturing capacity is about one-fifth. The South Korean government’s investment goal in the chip field focuses on improving the industry. In 2021, it proposed the “K-semiconductor strategy” and plans to invest 408 billion US dollars in 10 years, it revealed. The funds went to include:

In 2021, Japan proposed the “Semiconductor Digital Industry Strategy”, with the goal of maintaining a 10% global chip market share by 2030. Its budget amendment proposed a budget of $5.9 billion, covering semiconductor production, semiconductor equipment, 5G communications, and more.

The EU wants to ensure the security of its own chip supply, and its goal is to increase the EU’s share of global chip production capacity from the current 10% to 20% by 2030.

According to SIA, about three-quarters of the world’s chip manufacturing capacity is located in mainland China, Taiwan, South Korea and Japan, and the United States accounts for 13%. No country or region has yet achieved complete autonomy in the chip value chain. (intern Xue Yujie)

On August 1, Hangzhou announced that if families with three children apply for housing provident fund loans to buy new houses, the maximum loan limit can be increased by 20%, and the rental loan limit can be increased by 50%. In addition to Hangzhou, more than 30 cities including Cangzhou and Changsha have introduced new policies on the property market to favor families with multiple children, including relaxing purchase restrictions, increasing housing provident fund loan quotas, and providing housing subsidies.

Kweichow Moutai’s net profit in the first half of the year was 29.794 billion yuan, a year-on-year increase of over 20%.

GAC Aeon sold about 25,000 vehicles in July this year, a year-on-year increase of 138%. Cumulative sales from January to July this year exceeded 125,000. At present, GAC Aion has AION LX Plus, AION V Plus, AION S Plus and other models on sale. The company plans to build 2,000 super charging and swapping centers in 300 cities across the country by 2025.

Phase C of the second phase of the Tesla Shanghai Gigafactory Project (Phase I) was completed at the end of June this year. The project is mainly used to increase the production capacity of Model Y and Model 3. It is divided into three phases. Phase A is used to increase the production capacity of models, Phase B is to add a new model to production, and Phase C is to support R&D tests for vehicle production such as R&D centers. District, all three phases are currently completed. According to Tesla’s financial report, the Shanghai plant has an annual output of more than 750,000 vehicles.

Bank of Communications deleted the announcement of “1% compensation for early repayment”.

On August 2, the official website of Bank of Communications issued a document to adjust the “compensation fee for early repayment”. After the adjustment of the charging standard, early repayment of part of the loan will lose the privilege of exempting compensation once a year. All early repayments will be based on the amount of the early repayment principal. 1% of the compensation will be charged, and branches in various regions have the authority to reduce or exempt the compensation. At present, the announcement has been deleted due to a lot of controversy. Industry insiders believe that this measure is related to the current increase in prepayment and the decrease in new personal housing loan business.

On August 2, the Shenzhen Stock Exchange disclosed that the IPO status of Beijing Thinking Creation Information Technology Co., Ltd. became terminated. Thinking Creation is an enterprise that provides lifelong education services. Its products include Luo Ji Siwei, Get App, and Get University. Its legal person is Luo Zhenyu. Thinking Creation plans to be listed on the Science and Technology Innovation Board in 2019. It is considered that the hard-core technology is not enough and then turned to the Growth Enterprise Market. In the past two years, it has submitted seven prospectuses.

On August 1st, investor Duan Yongping issued a document “Bought another 100,000 shares of Tencent at $37.37”. This means that Duan Yongping spent about 25.3 million yuan to buy Tencent ADR in US stocks. This is already the fourth time he has bought Tencent stocks this year, saying that “the more they fall, the more they buy.” He believes that from the current mood, Tencent’s stock price may continue to fall.

The US strategic crude oil reserves fell to a 37-year low.

Data from the US Department of Energy showed that the US Strategic Petroleum Reserve (SPR) inventories fell by 4.6 million barrels in the week to July 29 to 469.9 million barrels, the lowest level since May 1985.

FlightRadar24 is a flight tracking website based in Stockholm, Sweden that provides flight numbers, aircraft types, registration numbers, takeoff and landing locations, and much more. In the evening of August 2nd, Beijing time, the website said that the excessive traffic caused the website server to be overloaded and it was difficult to open the webpage.

Apple bought the self-developed baseband chip of HP R&D Park for US$445 million.

Recently, Apple invested 445 million US dollars (about 3 billion yuan) to buy Hewlett-Packard’s industrial park in San Diego, and will recruit hardware and software developers to develop its own baseband chips, in order to solve the current iPhone’s common signal problems. It is reported that Apple plans to increase the number of local employees to 5,000 by 2026.

Samsung Electronics plans to build an “unmanned factory” by 2030.

Due to manpower shortage, Samsung plans to unmanned its global production base by 2030. Only machines and robots are used to operate the factory, and no manpower is invested in production positions. It is reported that Samsung Electronics formed a special task force last month to promote the introduction of unmanned factories. South Korea’s working-age population is expected to fall from 71.6% last year to below 60% by 2037.

The Estee Lauder Group may buy Tom Ford for over $3 billion.

The deal could be Estée Lauder’s largest ever acquisition, with the company currently valued at $97.7 billion. Tom Ford was reported by the media to seek a sale in July this year. It was founded in 2005. Its main products are menswear, and its product line also includes womenswear, handbags, cosmetics and perfumes. Estee Lauder has signed a long-term licensing agreement with Tom Ford’s beauty business, according to people familiar with the matter.

Activision’s second-quarter net profit for Snow was $280 million, compared with $876 million in the same period last year. Both sales and monthly active users fell by more than 20%, which was the third consecutive quarter of year-on-year sales declines, which were generally better than expected. By the end of the second quarter, the company had seen a 25% year-over-year increase in the number of developers, with plans to release new games such as Call of Duty, World of Warcraft and Overwatch later this year, the CEO said.

Game console prices in Japan are up to $100 cheaper than anywhere else in the world.

The yen has depreciated by 21% over the past year, but because Sony, Microsoft and Nintendo have always adhered to the 100 yen to $1 exchange rate standard, Japanese game consoles are at most $100 cheaper than the rest of the world. All three companies believe they can make up for their losses through overseas software sales. Sony’s PlayStation 5 is known in Japan as a “financial product”, and many people buy it to make a profit.

The number of monthly active users of Pinterest exceeded expectations, and the stock price rose sharply.

Pinterest’s second-quarter revenue was $666 million, up 9% year over year. Like Meta, Snap and others, a weaker advertising market has slowed revenue growth. Monthly active users were 433 million, a slight decrease but better than expected. Bill Ready, who was the head of Google’s commerce, is the new CEO, and the business focus continues to shift to e-commerce and reduce advertising dependence. In addition, Pinterest shares rose more than 20% after activist investor Elliott Management announced it was its largest shareholder.

The title picture comes from the TV series “Coquettish Lawyer”

This article is reprinted from: https://www.latepost.com/news/dj_detail?id=1255
This site is for inclusion only, and the copyright belongs to the original author.