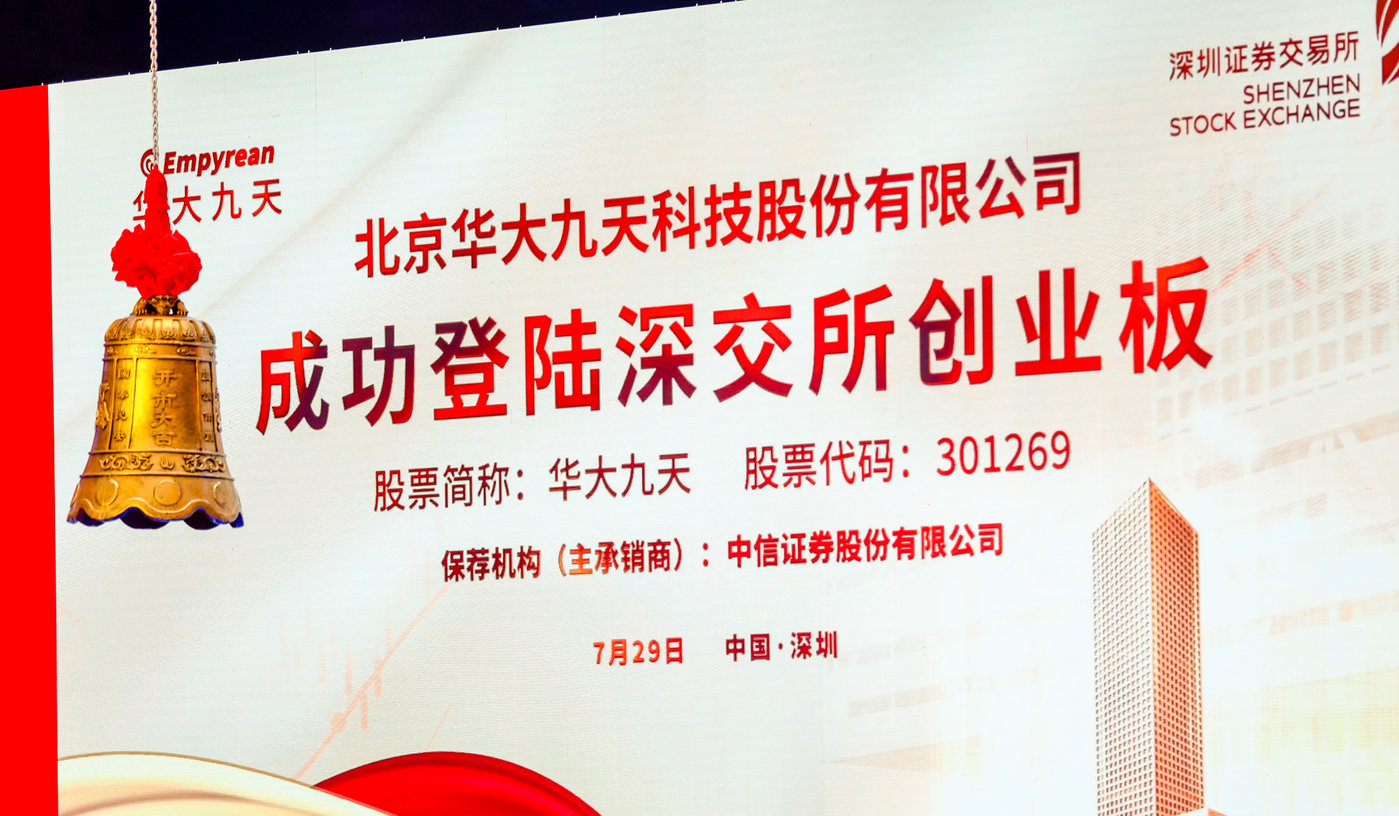 In order to reduce the dependence on imported chip design software tools from the United States, the development of China’s integrated circuit electronic design automation (EDA) industry has attracted much attention in the past two years. Six months after the listing of “the first share of EDA” Gelun Electronics (688206.SH), another domestic EDA company has officially landed on the A-share market.

Titanium Media App reported on July 29 that “Huada Jiutian” (301269.SZ), a leading domestic EDA software company, was officially listed on the Shenzhen Growth Enterprise Market this morning. , the price-earnings ratio is as high as 280%. As of press time, Huada Jiutian’s share price has risen by more than 120%, with a total market value of about 40 billion yuan.

At the same time, another EDA software company “Guangliwei” has completed the subscription on the 26th; and the domestic CAD (ie computer-aided design) software company Suzhou “Haochen Software” is waiting for listing review, and it will become a “domestic” in August as soon as possible. CAD Second Strand”.

Domestic industrial software is ushering in a wave of listings.

Although Huada Jiutian’s domestic EDA market share is only 6%, the secondary market still pays attention to the listing trend of domestic industrial software, and the “substitute feast” of semiconductors has not faded away.

Zhao Zhanxiang, partner and CTO of Yunxiu Capital, told Titan Media App that in the future, the domestic EDA market needs to develop EDA tools for high-end digital chips (CPU, GPU, etc.) and some key technologies and innovative EDA software tools. “At present, the scale of domestic enterprises EDA is small, but there is an opportunity to grow in the future.”

The revenue in 2021 will be nearly 600 million, with SMIC, Weir and 8 state-owned assets as strategic investors

EDA usually refers to the design method of using computer-aided design software to complete the functional design, verification and other processes of integrated circuits. The “mother of chips” is one of the biggest fundamental pillars of the IC industry. Chip engineers must rely on EDA software tools to complete circuit design, layout design, and more.

EDA software is indispensable in the chip industry. In May 2019, the U.S. Department of Commerce placed Huawei on the Entity List, making it impossible to use the latest EDA software to design Kirin chips, making the autonomy of industrial software more and more important. (For details, please refer to the previous article of the Titanium Media App: “Can the domestic EDA break the monopoly of the three overseas giants? | Titanium Media Depth” )

According to industry agency data, the global EDA market will reach US$13.8 billion in 2021 and is expected to reach US$34 billion in 2030.

Huada Jiutian was established in 2009, mainly engaged in the development, sales and related services of EDA tool software. The main products include the full-process EDA tool system for analog circuit design, and EDA tools for digital circuit design. At present, among the existing products, only the circuit simulation tool technology supports 5nm, and other analog circuit EDA tools support the 28nm process. Therefore, in the past three years, Huada Jiutian’s net profit returned to its parent after deducting non-fees was only less than 54 million yuan, and it even lost 10.45 million yuan in the first quarter of this year.

At the end of 2021, Huada Jiutian was approved for listing by the Shenzhen Stock Exchange, but its IPO legal agency “King & Wood Mallesons” was formally investigated for its financial fraud case involving LeTV, which delayed the listing process of Huada Jiutian. In March this year, Huada Jiutian restarted its IPO plan.

In addition, the shareholder information of Huada Jiutian has been controversial, mainly because Shentong Metro and Shanghai Tunnel Engineering Co., Ltd. hold 70% and 21.5% of the shares behind the third largest shareholder Shanghai Jianyuan Equity Investment Fund Partnership. %. Therefore, this means that Shentong Metro and Tunnel Engineering Co., Ltd. (600820.SH) indirectly hold 9.67% and 2.97% of Huada Jiutian, the latter being a listed company.

In response to the relevant disputes, Tunnel Co., Ltd. confirmed in the reply on the interactive platform the day before yesterday (27th) that the fund of the company’s shareholder Shanghai Jianyuan is included in the long-term equity investment item in the financial statements of Tunnel Co., Ltd., and it is accounted for by the equity method.

It is reported that the BGI Jiutian IPO raised more than 2.55 billion yuan ($381 million) for multiple EDA tool upgrades and development projects, including building analog and digital chip design and verification tools.

In the future, Huada Jiutian Company has three development goals: by 2023, it will help China “fill up” the shortcomings of key chip EDA software products; Process software tool system; to be a leader in the global EDA software industry by 2030.

According to the disclosure of the Shanghai Stock Exchange on July 20, the domestic CAD (ie computer-aided design) software company Suzhou “Haochen Software” has completed the meeting and will be listed on the Science and Technology Innovation Board as soon as next month.

Coincidentally. On July 25, Guangliwei released information on the placement of IPO strategic investors, showing that four strategic investors including the second phase of the National Integrated Circuit Industry Fund, Guangzhou Bay Area Semiconductor Industry Group, Zhejiang Financial Holdings Investment and Hunan Lugu Development Group participated in the placement. , the IPO overraised by 129%, and it is expected to be listed on the Shenzhen Stock Exchange as soon as next week.

Zhao Zhanxiang told Titanium Media App that one of the reasons behind the emergence of domestic EDA companies is that due to the technological competition between China and the United States, the company has the opportunity to obtain orders for high-end EDA software from domestic semiconductor companies, and the unit price of software is high, so domestic EDA has been in the past two years. The company’s revenue has experienced explosive growth.

“The value of EDA investment is mainly reflected in three aspects. First, the chip industry brought by the EDA industry has a high growth rate; second, the EDA technology threshold is high, and the core competitiveness is difficult to replicate; third, the domestic digital verification EDA field enterprises have a high market. There is room for development.” Xie Zhonghui said in an interview with Titanium Media App.

However, for a long time, oligopoly, high technical barriers, long investment cycle, lack of industrial ecology and talent shortage have restricted the development of domestic EDA and other industrial software industries. Therefore , the domestic EDA market still faces many challenges.

“Compared with the three major international EDA manufacturers, there is a certain gap between Huada Jiutian in terms of brand influence, technology research and development level, financial strength and market share.” Huada Jiutian stated in the prospectus that the overall industry is currently self-sufficient. The rate is very low. SMIC, China Electronics Group, Hua Hong Semiconductor and BOE are the core customers of Huada Jiutian. Globally, Huada Jiutian has a market share of less than 2%.

In an interview with Titanium Media App, Ling Lin, global vice president of Siemens EDA and general manager of China, said that through AI technologies such as machine learning and real-time computing, EDA can improve the efficiency of chip simulation, simplify the amount of calculation, and reduce the amount of data in the lithography process. It is more accurate, and solves problems such as chip ecological coordination. And “EDA cloud” solves problems such as yield improvement and heat dissipation.

Regarding the phenomenon of consumer electronics order cutting, Ling Lin believes that although the decline in consumer demand has changed the supply chain, the digitalization trend of semiconductors will not change. Life, the market, and the economy are closely related to basic chips and semiconductors. Therefore, the development of industrial software industries such as EDA will not stop because of this.

In an interview with Titanium Media App, Ling Lin said that EDA is a very complex, professional and delicate industry, which requires patient and long-term investment from companies in the industry, as well as strategic vision, mergers and acquisitions of new technologies, etc. Mergers and acquisitions have become very effective, producing synergistic effects and continuing to form a trend of healthy development and rapid growth.

In 2019, before the listing of Gaolun Electronics, it completed the acquisition of Bodawei and successfully integrated it. Then in June 2021, Gaolun successfully acquired 100% equity of Entasys, a South Korean EDA company, to improve its products and increase its market share. In addition, Huada Jiutian also mentioned the advantages of EDA mergers and acquisitions in the prospectus, saying that this is an important way to enhance the comprehensive technical strength.

Ling Lin believes that the essence of the EDA industry lies in continuous innovation and iteration. Commercial mergers and acquisitions are a high probability event for the EDA industry, and only by accumulating a whole chain can they gain or expand market share.

“I believe that the ultimate goal of M&A is to connect upstream and downstream in the ecosystem; the second is to support customers to do more difficult and complex designs, so that customers can use EDA tools more simply and conveniently.” Ling Lin said to Titanium Media App.

However, from the perspective of the secondary market, the situation of industrial software companies after listing is not as good as expected.

The current share price of Zhongwang Software (688083.SH), which went public in March 2021 and is known as the “first domestic CAD stock”, has dropped by more than 50% from the opening price on the day of listing. The stock price of storage EDA company “Guan Lun Electronics” also fell by more than 20% compared with the day it went public in December last year, and its market value has shrunk by more than 4 billion yuan.

Liu Weiping, chairman of Huada Jiutian, once described the EDA industry as follows: the first place eats meat, the second eats soup, the third licks the bowl, and there is nothing after the third. However, judging from the current market share, Huada Jiutian still has a long way to go before it “eats meat”. (This article was first published on Titanium Media App, by Lin Zhijia)

This article is reprinted from: https://readhub.cn/topic/8i2vRxtEng6
This site is for inclusion only, and the copyright belongs to the original author.