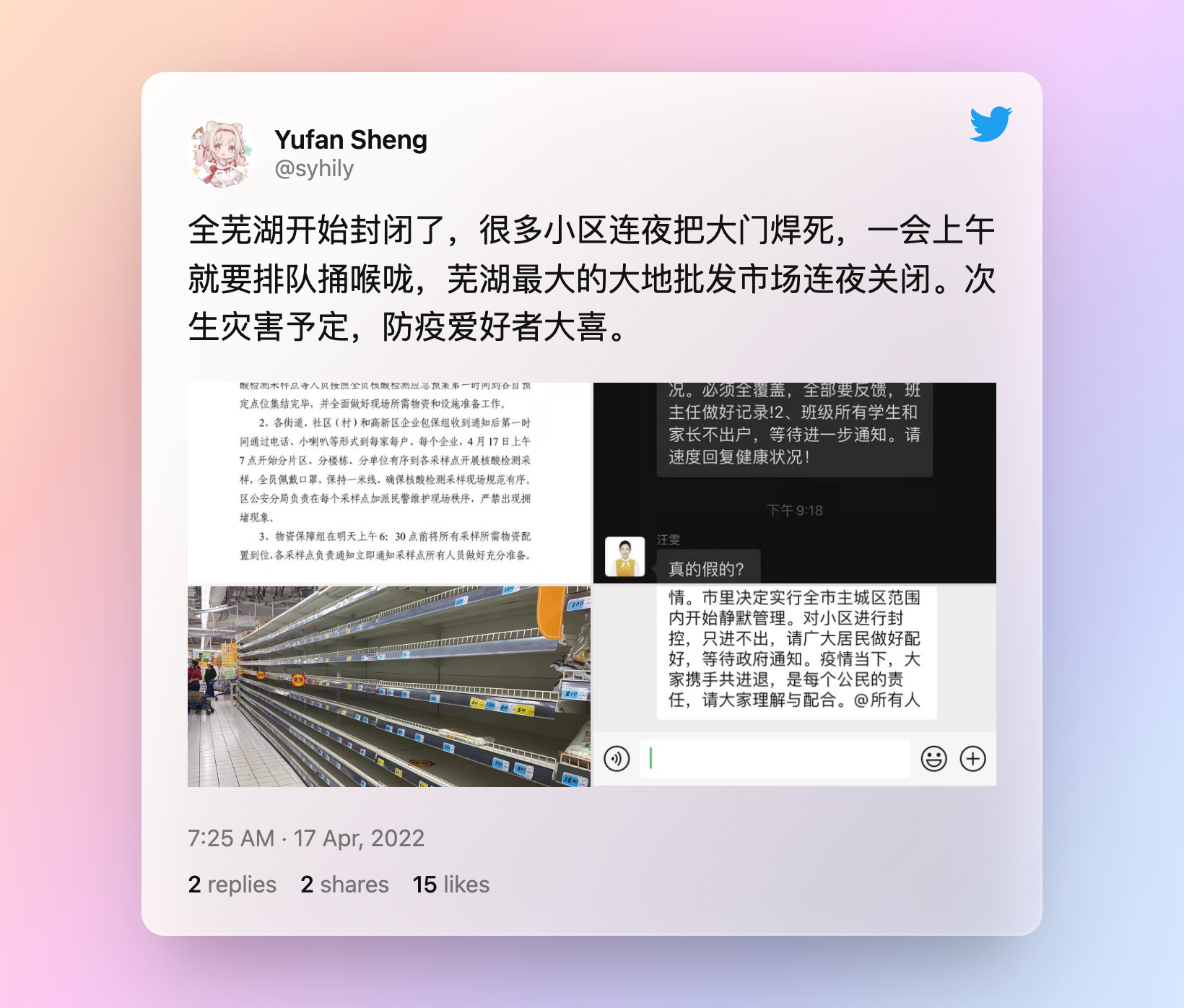 In the Twitter information flow these days, many of them are news blocked by various places. It’s very likely that because of a sudden positive test, I can’t even get out of the community after I open my eyes on a new day.

I want to say this to express that this huge uncertainty brings an extreme sense of incompleteness to the individual, and the reasons behind this uncertainty are of course complicated. I don’t want to go into depth, I just recall Starting from an article in a book I read last year—“Liu Shen Leilei Reading Jin Yong”, “The Main Ship of Zhao Min County”, I also deliberately expanded this article in my reading notes at that time, so I won’t repeat it here 1 .

…In other words, once, Zhao Min wanted a boat. Why do you want a boat? It was because she and Zhang Wuji were tracking the enemy, Granny Jinhua. They knew in advance that Granny Jinhua was going to hire a boat to go out to sea, so they planned to set up a trap and create a boat to induce Granny Jinhua to hire her.

Zhao Min rushed to the location of the sea first, which was a small coastal county in the north. “Riding straight into the county seat”, he took out King Ruyang’s gold medal for mobilizing troops and horses in the world, and asked the county officials to go to the ship. Her requirements were clear and simple, including the following points: a sea-going boat, to be strong; there should be helmsmen and sailors, food and water, and clothes to keep out the cold; and some weapons should be hidden. The magistrate’s face was full of determination, and he said: Understood!

…but the reality still shocked her. Early the next morning, the flattering face of the magistrate appeared before her, reporting that the boat was in place. This speed is not unpleasant, Zhao Min should also be very satisfied. But when she came to the beach to see it, she was immediately stunned. In the words of the book, she “stomped her feet again and again and shouted: ‘Oops!'” Because the one parked in front of her was a warship.

… Miss Ben just wanted a civilian boat, but you got me a gunboat. Miss Ben is using this boat to trick Grandma Jinhua, not to shoot guns.

In other words, why did the magistrate want to build a war ship in a whimsical way? It’s very simple, there are four words in the book – “Double the flattery”, so I went to the navy to borrow a warship. All the confusion is because of the words “doubled flattery”.

Undoubtedly, the magistrate should not only implement Zhao Min’s instructions properly and perfectly, but also double the implementation, 200%. He will definitely ask: not only to build a boat for the county owner, but also to build the best, most powerful and most beautiful boat. We have to think about the things the county lord has ordered, and we have to think for her about the things that the county lord has not ordered.

It is conceivable that during the few hours when Zhao Min, Zhang Wuji, and Xiao Zhao were quietly “drinking and waiting”, the various departments of the county government must be operating at a high speed, and everyone was frantically busy. There is probably only one word: ship, ship, ship… Immediately, a most groundbreaking plan was born – get a warship for the county master! Because there is no better, stronger, more windy ship than a warship.

This small county town also shows a strong executive power. In less than a day, the warship really came. The boat was borrowed from the navy. Locally looking for troops to borrow boats, most of them have to lose a lot of favor and spend a lot of money. Of course, for magistrates, cost is not an issue at all for this matter.

… The story of Zhao Min’s boat search illustrates a truth. Under the Yuan Dynasty system she was in, officials always had the urge to overdo things. The main ship of the county is increased layer by layer, and finally becomes a gunboat. What if the county owner asks everyone to learn “The Great Shift of Heaven and Earth”? Under that, it becomes overtime learning, running learning, ten thousand signature learning, private school children’s group learning, and expectant mothers’ fetus teaching.

…and the county magistrate can’t be blamed for the gunboat. He didn’t dare not give gunboats, in other words, in an environment where everyone was overdoing things, he didn’t dare to gamble on not overdoing his career. What if Miss Zhao likes gunboats in her heart? What if you honestly gave a civilian boat, but the next county gave a gun boat? What if a civilian ship was given to the place, but the navy sent a gunboat in a ghostly way? Do you regret it later? Furthermore, even if Miss Zhao herself only wanted an ordinary civilian boat, her boyfriend Zhang Wuji beside her said in a strange yin and yang: It’s better to have a gunboat. Are you embarrassed then? So if the next Miss Zhao comes to ask for a boat again, what should the magistrate do? I’m afraid today you and I still have to repeat the story of yesterday, or give her a gunboat.

Not to mention whether the Liushen Leilei is over-interpreted, but you can find examples of the officials’ performance in this episode in any era-I admire Mr. Jin Yong’s keen observation.

This article is reprinted from:https://aaronnick.github.io/posts/curry-favor-with-double/
Love reading is only for inclusion, and the copyright belongs to the original author.