I read the news two days ago and saw a report by Mingqi Guo on Apple’s MR products. The report mentioned that Apple’s MR will be released in January next year. With the continuous release of industry chain news, Apple’s new MR will use a brand new Pancake optical modules have become a hot topic. Similar to the report below.

Seeing this report, I immediately felt that the next killer terminal product in the field of consumer electronics may be coming. Based on Apple’s style and huge influence, I vaguely feel that the VR terminal equipment industry chain may have opportunities. So what is the pancake optical solution, and what investment opportunities exist, I spent the weekend to make a simple exploration.

1. What exactly is the Pancake optical solution?

To briefly refine the core content, the current VR headset devices are developing in the direction of light weight, while the traditional Fresnel optical solution is relatively heavy, and the pancake optical solution can reduce weight, which is in line with the development trend. If the VR headset is to be thin and light, it is very important to use a shorter optical path to solve the imaging problem. One method is to use a magnifying glass, and the other method is to use two mirrors for reflection.

The optical solution based on pancake is that after the image source enters the mirror with transflective function, the light is folded between the mirror, the phase retarder and the reflective polarizer for many times, and finally exits from the reflective polarizer. In addition to shortening the distance between the lens and the display, this solution can also improve the blurred edge of the field of view, picture distortion, and edge glare. In a word, the optical solution of pancake is an important solution to replace the Fresnel lens in the future.

2. What is the market potential of the Pancake optical solution?

After clarifying this point, I seem to know what stage this pancake optical solution has developed at this stage and how big the market potential is. I searched for a research report on wind, Essence Securities’ “Pancake is expected to become a mainstream optical solution”.

First, we introduced the shipment of VR equipment and the forecast for a period of time in the future. We can roughly estimate the overall market size and growth.

After seeing this data, I found that the shipment of VR terminal equipment has been getting faster and faster in the past two years. I personally also started a pico Neo3 during the Spring Festival this year, but because the content ecology is not perfect, it is basically eating ashes status. According to this forecast, I briefly estimated the overall market size. Assuming that the average price of VR equipment in 2025 is 2,000 yuan, the overall market size will be 52.6 billion, and the domestic market will be about 23.2 billion, with a rapid growth rate.

So the next question is what stage of application pancake has reached at this stage. In fact, the corresponding pancake optical solution products have been released in the past two years, but they have not attracted much attention until the recent explosion of the products of the two major players Meta and Apple. The market responded when the optical solution of pancake was used.

3. What is the composition and cost of the Pancake optical solution?

This traditional Fresnel lens accounts for about 5.5% of the overall cost, which is basically the module price of more than ten yuan. However, the price of pancake’s optical solution module is higher, and the current price given by Essence Securities is 150-200 yuan.

Based on the above price and shipment estimates, the overall market size of pancake optical modules will be between 4 billion and 5.3 billion yuan in 2024, and the domestic market will be between 1.7 and 2.3 billion yuan. If a single VR uses two modules group, the market size will double. However, this is only an application on VR terminal equipment, and we can focus on the expansion of other application scenarios and the increase in volume after the price of VR equipment is reduced.

We can see that the composition of the entire pancake optical module includes polarizer, beam splitter and 1/4 glass. I don’t understand these professional terms very well, so I opened Baidu again and searched.

The 1/4 glass slide is also called the 1/4 retardation plate. When the light of a certain wavelength is incident vertically, the phase difference between the ordinary light and the extraordinary light is 1/4 wavelength. The same will also have full wave plate, 1/2 glass and so on.

In order to further understand the above content, I opened CNKI and looked for articles about polarizers and beam splitters, but they were too professional to be digested in a short time. So, I opened the wind again. The first is the depth of Shanshan and Sanlipu, so I opened the official website of Sanlipu and saw the polarizer products for 3D eyes at a glance. 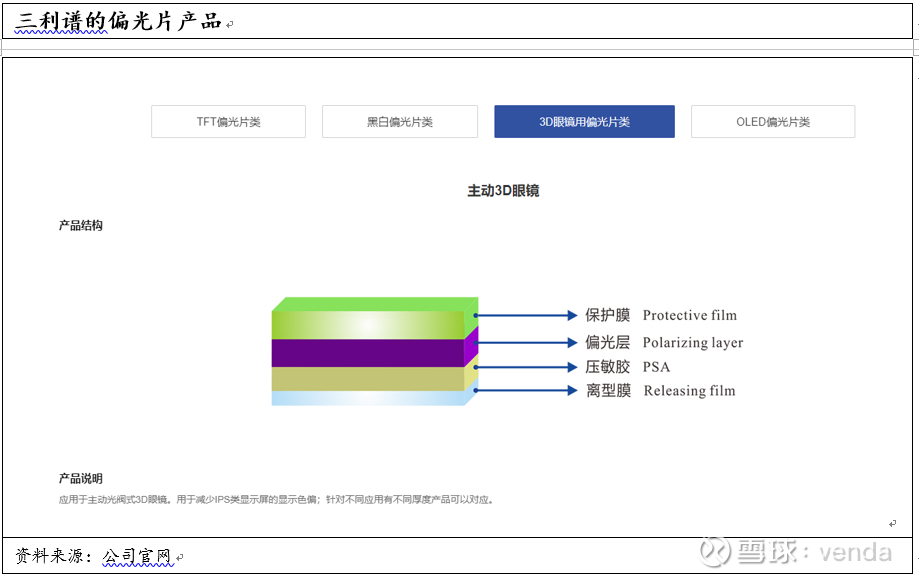 After that, I found Sanlipu’s annual report and took a look at the company’s product structure, costs and major suppliers. Polarizer is a kind of polymer material made of polyvinyl alcohol (PVA) film and triacetate cellulose (TAC) film through stretching, compounding, coating and other processes. It is mainly used in the field of liquid crystal display. The basic structure of polarizer is as follows:

The main characteristics and functions of each material are as follows: 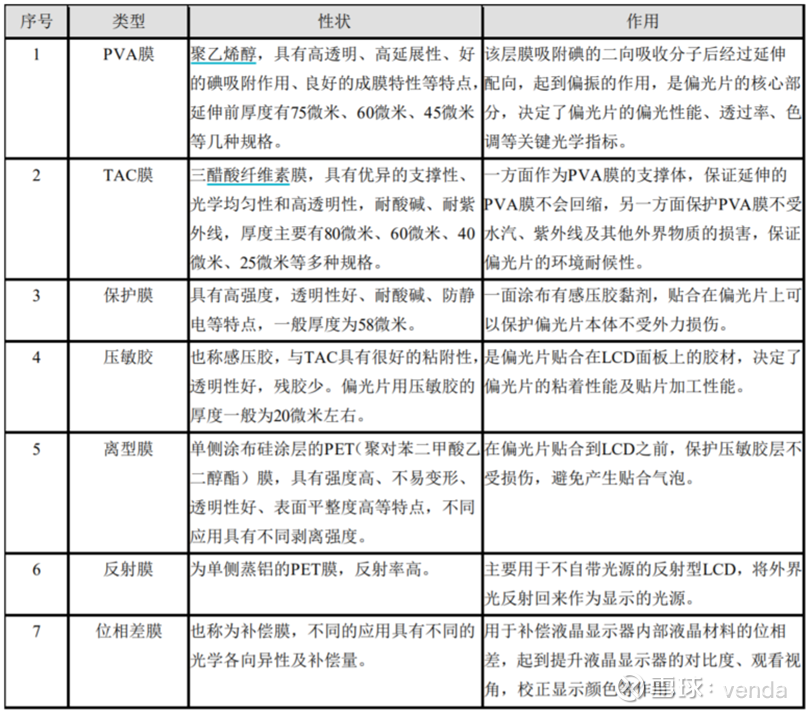 With such a high proportion of materials, I wanted to know who the supplier of Sanlipu was, so I opened wind, searched for PVA, and all came up with Wanwei Hi-Tech. Seeing that the stock price has risen quite well recently, I first turned over the annual report.

After that, I looked at the production of polyvinyl alcohol (PVA). The total global plant capacity is 1.85 million tons, and the actual output in 2021 is 1.25 million tons, mainly in the Asia-Pacific region.

Wanwei High-tech basically occupies 30% of the production capacity of PVA equipment, and is a real leading enterprise of PVA materials. Next I looked at the company’s recent acquisitions and capacity building. The acquisition is mainly to acquire the assets of Wanwei Group. The acquisition target is mainly for the research and development, production and sales of PVB interlayer film and related auxiliary materials. The main products are PVB film series products. The company plans to add 3 production lines until 2023. In May, the production capacity will reach 36,000 tons, making it one of the largest PVB interlayer manufacturers in China. In addition, the company also invested in the establishment of a project of 6,000 tons of water-soluble polyvinyl alcohol fiber per year. The company has gradually expanded along the PVA material as a whole, and is very confident in the application and expansion of PVA downstream materials.

Based on the curiosity about the above-mentioned downstream applications of PVA, I searched for PVA optical films, and then saw a material in the Ministry of Industry and Information Technology’s “First Batch of Application Demonstration Guidance Catalogue for Key New Materials (2021 Edition)” (draft for comments), among which optical grade PMMA Base film, optical grade TAC base film, and optical grade PVA base film are included in the list as new materials. We have seen both PVA film and TAC film before. PMMA base film aroused my curiosity, and I wanted to check the main application of this base film.

So, I opened wind again, searched for PMMA, and then Shuangxiang shares appeared. I opened the annual report of Shuangxiang shares. The company has optical-grade PMMA business. The annual report introduces PMMA (polymethyl methacrylate resin), which is one of the most excellent varieties of synthetic transparent materials so far. It has good transparency, chemical stability, weather resistance, chemical resistance, and easy dyeing. , easy processing and beautiful appearance and other characteristics, is known as the “Plastic Queen” of high-grade materials.

I suddenly found that it is a bit off topic here, but the PMMA material itself can be used for display, so will this material be used in VR terminal equipment? So, I started to search for news again, and in a report titled “VR Enters the Fast Track of Development”, I said that according to rumors, Apple’s MR equipment uses three sets of lenses, focusing on the use of optical-grade PMMA. This goes back to the starting point of the research.

4. What investment opportunities does Pancake Optical Solutions have?

At this point, the research on the pancake optical solution has come to an end, and here is a summary to see if there are potential investment opportunities. According to the previous prediction, the market size of the overall optical solution for VR equipment is about 5 billion yuan. If according to Goertek’s gross profit margin, it is expected that the incremental market for polarizers will be at the level of about 2 billion yuan. For enterprises with 2.3 billion yuan, they can still provide some increments. However, the most important harvest today is not Sanli spectrum, but Wanwei High-tech and PMMA materials. On the one hand, it is the PVA leader of Wanwei High-tech, and it is gradually expanding its production capacity and industrial chain. On the other hand, there are many downstream application scenarios of PMMA. , these may be more worth digging, and the footage of VR equipment may only be part of it.

To sum up, regarding pancake’s VR optical solution, with the influence of Meta and Apple’s new products, it can bring opportunities to the original industry chain, such as the assembly of VR equipment, optical modules, polarizers, lenses, etc. And it can also bring new application areas to the original material enterprises, but this kind of increment is relatively limited for enterprises with large income scale, but the application scenario of the continuous expansion of upstream raw materials may bring continuity. Opportunity. In the future, you can pay more attention to Wanwei High-tech.

There are 11 discussions on this topic in Snowball, click to view.
Snowball is an investor’s social network, and smart investors are here.
Click to download Snowball mobile client http://xueqiu.com/xz ]]>