Pinwan, June 9, Sensor Tower store intelligence data shows that in May 2022, Douyin and the overseas version of TikTok attracted more than US$277 million in the global App Store and Google Play , 1.6 times that of the same period last year, ranking first in the global mobile application ( non-gaming) top-grossing chart . Among them, about 47.5% of the revenue comes from the Chinese version of Douyin; the US market ranks second, contributing 17.7% of the revenue; the Saudi Arabian market ranks third, accounting for 4%. 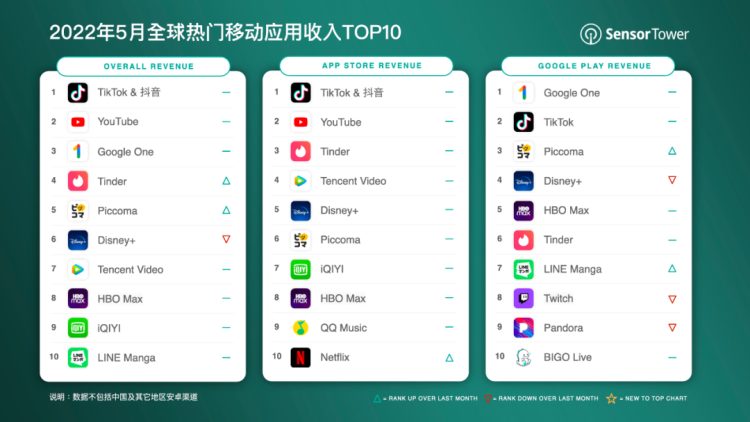 YouTube came in second with nearly $119 million in revenue, an increase of 17.6% compared to the same period last year. Among them, 40.1% of the revenue came from the US market, and the Japanese market ranked second, accounting for 19.6%.

The other three apps in the top five are Google One, Tinder and Piccoma.

Sensor Tower’s revenue estimates do not include in-app advertising, or revenue generated through third-party payment channels such as ride-hailing, food ordering, and online shopping; taxes and refunds are not included in the estimates. Data also does not include third-party Android marketplaces in China and elsewhere.

This article is reprinted from: https://readhub.cn/topic/8gHw8JjZ46D
This site is for inclusion only, and the copyright belongs to the original author.