In May of this year, a Twitter blogger named QuiteDan uploaded a video demonstrating the UE5 engine. The content is a squirrel holding a Uzi submachine gun the size of its own body and using the recoil to send itself to the sky .

This tweet has received more than 80,000 likes in a very short period of time. Some netizens who follow it are amazed at the picture effect of the UE5 engine, while more netizens are simply focusing on this one. On the “Rocket Jump” squirrel – no one can resist the charm of the furry little cutie.

Recently, it was discovered that the popular squirrel has its own store page on Steam. In the column for the release date, the author naughty wrote “Good question!” Although the whole incident revealed an unethical atmosphere, it looked like a joke, but in fact the game has already been put into development. 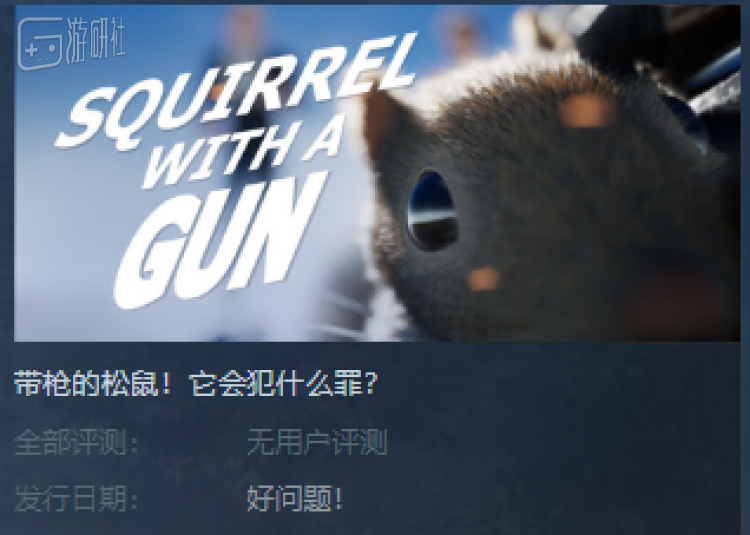 Squirrel with a Gun

Things have to start from before and after the video of the pusher PrettyDan just became popular. His account has uploaded many videos related to the production of this virtual squirrel. At first, the exaggerated recoil of the submachine gun and the furry image of the little squirrel made people generally think that this nonsensical design was just testing the physical effects of UE5. Later, what the author revealed shows that everything seems to be developing in the direction of the full game.

In some of QuiteDan’s videos, you can see clips of his designed squirrels fighting hostile targets in close quarters.

The game uses the Unreal 5 engine

Among them, there is also a demonstration of the physical effect of the squirrel being hit: for example, when fighting with an agent, it was shoveled by the opponent with a “sweeping leg”.

Some demos even showed off a prototype level design that might exist.

In fact, QuiteDan mentioned in an interview with the media that the video he uploaded was a specific demonstration of the game development process, and he also informed fans on social media as soon as the Steam store page opened.

And the newly launched game demo screen in August once again shocked the majority of netizens – after not seeing it for several months, it has “evolved” to the point of robbery in the street. This little guy not only skillfully draws a gun to humans, but also makes the other party throw away their armor and armor, and finally takes the other person’s mobile phone. 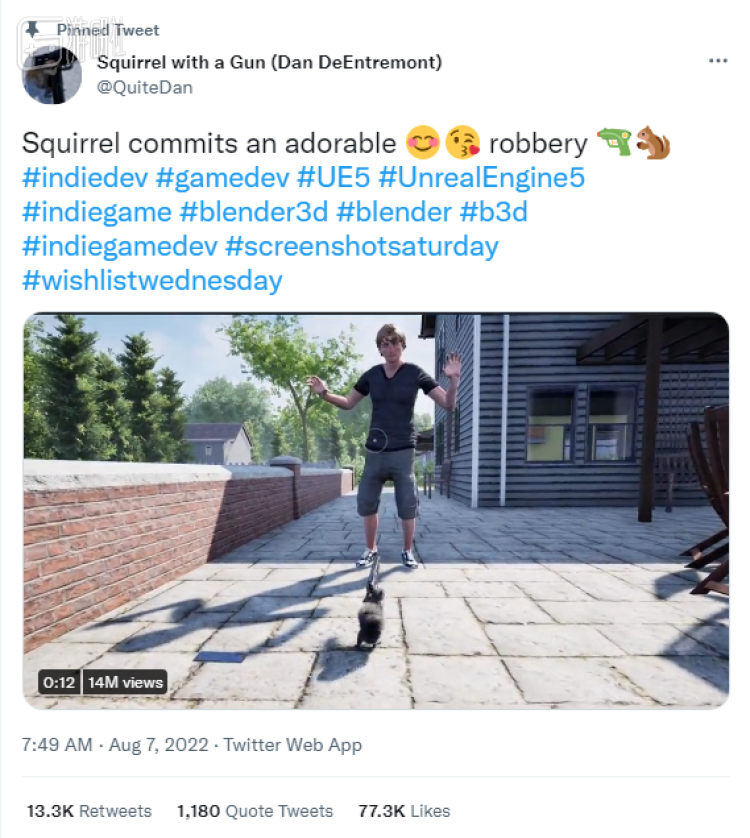 Now this video has received 70,000 likes, and netizens have launched a heated discussion about the game. Players who fully accepted this contrast and cuteness said “Shut up and take my money” unsurprisingly, and someone has vacated the throne of “Game Candidate of the Year” for it. However, many people also expressed dissatisfaction that the cute image of small animals could not escape the infection of vulgar street style, considering that the shooting cases in recent years have not been small.

However, “Squirrel with a Gun” is still far from people’s expectations. According to the introduction of the Steam homepage, this game is a “shooting and combat-based sandbox game”, which means that the game has many exploration elements, and players can explore the map from the perspective of a squirrel – of course, the method of exploration also includes the use of guns. The recoil “takes off”. In the world of squirrels, humans are not all enemies. The protagonist can talk to nearby residents and help them find food or ask for benefits. Other than that, the developer has not disclosed any gameplay-related information.

It seems that whether this little independent game can be “cute”, at least until the “good question” becomes a specific release date, a preliminary assessment can be made.

This article is reprinted from: https://www.yystv.cn/p/9599
This site is for inclusion only, and the copyright belongs to the original author.