After the last white night talk about lizards, it has been a long time since my family’s lizards have anything worth writing about, so today’s thing is not planned. 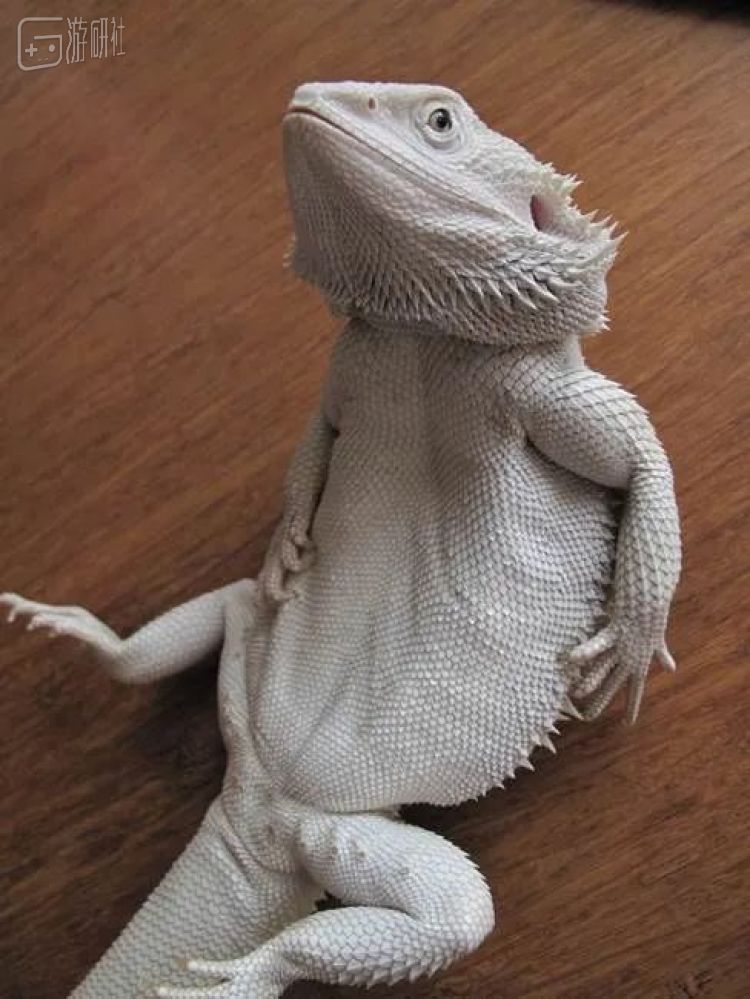 Let me tell you how stupid “Bai Baili” is now

Just as many people call the cockroaches that feed the lizards Dubia, pet laps generally refer to geckos as geckos. I guess this might make these creatures sound less common at first glance and better marketable. Among reptile pets, the gecko is almost as popular as the lizard. This creature varies greatly in appearance depending on the breed, some look creepy, but others are completely synonymous with cute pets. 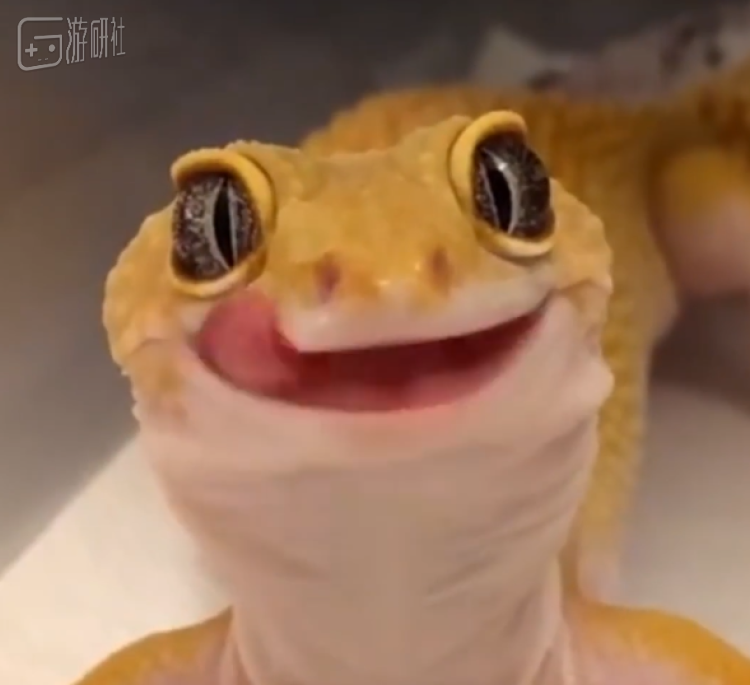 Some of them do look a little funny

When Shanghai just lifted the lockdown in June, my family also welcomed a gecko. It is only about 3cm long, the same length as the cockroach I feed the lizards, but much slimmer than the cockroach.

However, this gecko was caught in the bathroom of my house, in other words, it was wild.

I go to bed relatively late and often take a shower in the middle of the night before going to bed. That night, I just stepped into the shower room with one foot, and saw a dark shadow flashing under my crotch. I was so frightened that I ducked to the side and almost smashed the glass door.

The little guy swishes quickly along the base of the wall, pausing in every dodgy shadow, and moving quickly as soon as he sees a nuisance. As a hairless primate, I am well aware of my genetic disadvantage, and I am asking myself for being more agile than it, so instead of trying to catch it with my bare hands, I rushed out of the bathroom naked, grabbed one on the table and just finished eating it. of snacks in plastic cans, rushed back to the bathroom and closed the door. 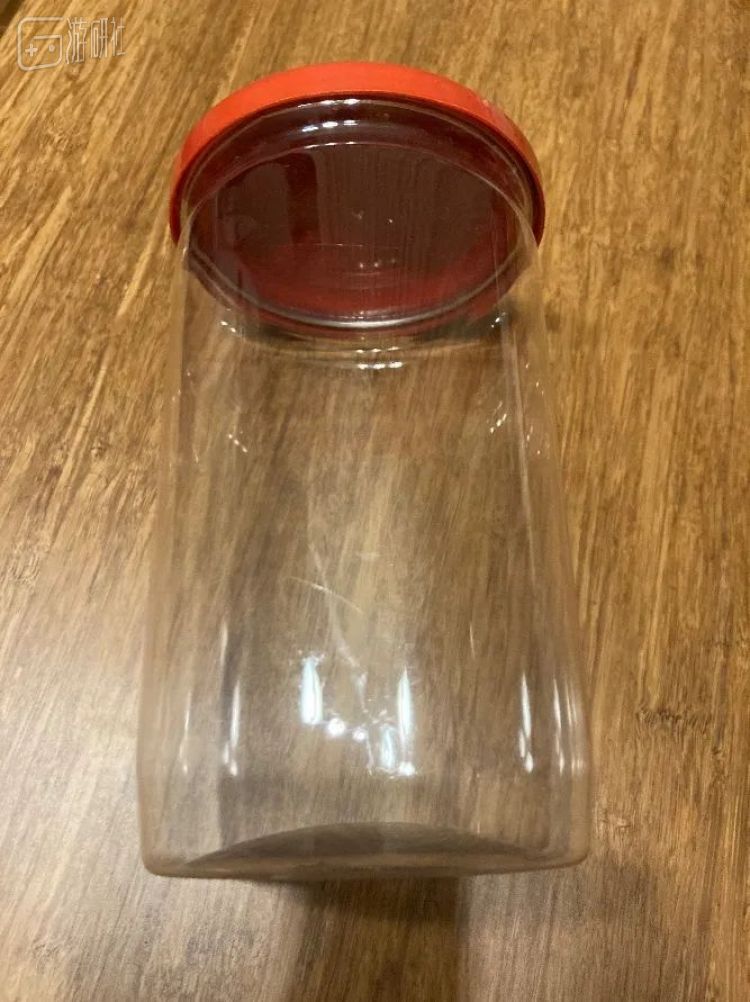 Close the door to beat the dog, catch the turtle in the urn.

In my bathroom, in addition to the washstand and toilet, there are scales, washing machines, and countless toilet cleaning tools and supplies on the surrounding walls. I stood in the middle of the room, mulling the possibilities, considering whether to clear everything out of the bathroom.

Just as I was having a selective disorder, it suddenly sprang out of a corner, just past my feet, obviously trying to cut corners and get under the washing machine behind me as quickly as possible. If it succeeds, then don’t want to sleep tonight. I straddled it, blocking its way, and with another nice squat, I managed to buckle it under the plastic can while it was doing its wayfinding calculations. It took less than 3 seconds in total from it’s escape to being arrested. A close call.

The next day, with plenty of light, I was able to get a good look at the reptile.

Unlike the stunners sold by the pet store, this gecko is surprisingly ugly in color, with gray and green, and dark gray markings. He’s wary, and he’s a tall order compared to my two languid lizards. But it seems to have some kind of disability, and it can’t climb the wall at all. Every attempt to climb the wall of the tank fails. 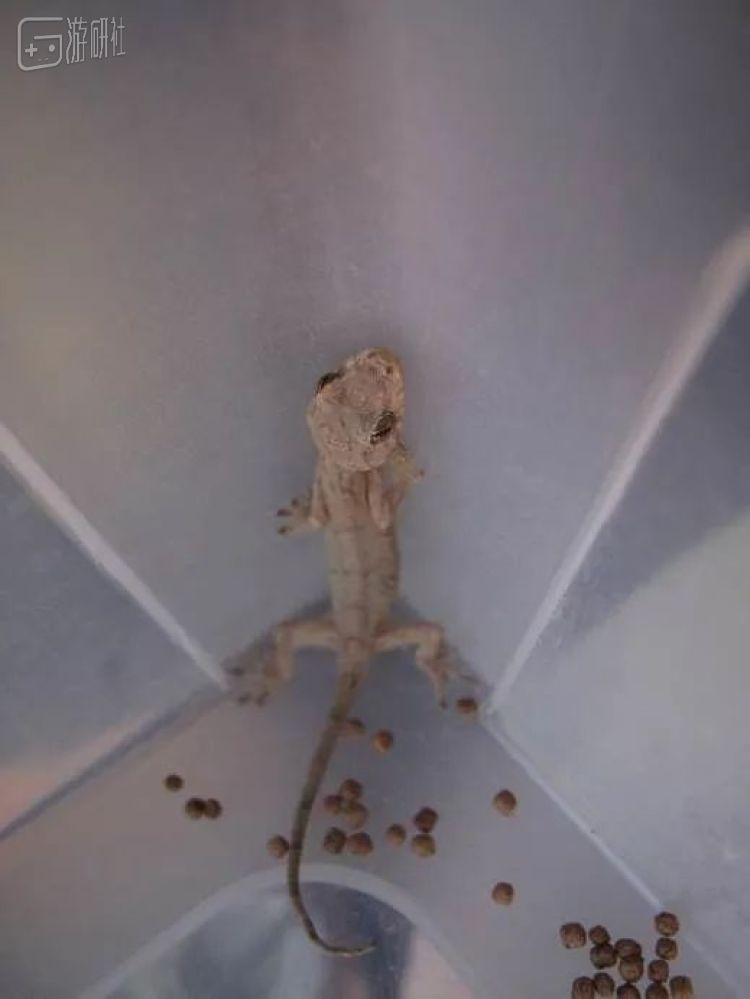 This is the highest position it can climb

I dug out the box I used to keep the cockroaches and threw the gecko in. The lockdown cut off the lizards’ desire to eat cockroaches, but they developed a hobby of eating chicken breasts. So after the lockdown was lifted, I simply stopped buying cockroaches. Now, lizards eat whatever I eat at home.

But what do geckos eat?

I searched the Internet, and there is no experience in raising wild geckos at all. I consulted the reptile seller again. The seller suggested that I should not keep wild geckos and release them as soon as possible, because it is too difficult to keep them. Also, after a long period of exploration, human beings have concluded the types of pets suitable for domestication. It is not unreasonable to choose not to keep wild geckos. But I was unwilling and decided to explore it myself.

The first food I tried was balls. 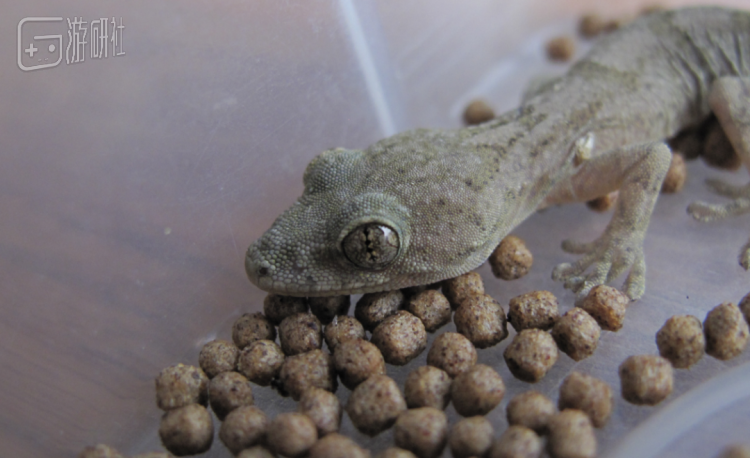 The round balls around it are not Swedish meatballs, but fish food. Taking them as a reference, just gives everyone an intuitive understanding of the size of this gecko. After a few days it didn’t move, I just used the fish food as bedding.

Next, I tried Lizard Gel. My lizard can’t resist the temptation of the gel at all, but when I take some gel with tweezers and stretch it over, the gecko will bite the gel and slam it far away, as if it is clearing an obstacle in front of it or Rubbish.

As I wrote in my last lizard article, I have a lot of experience with force feeding. The little lizard “Thirteen o’clock” was the size of my living piston.

I patiently and repeatedly picked up the gel that was thrown away by it and brought it back to its mouth. The pattern quickly emerged: as long as this process was repeated for 15-30 minutes, it would definitely be impatient and put the gel on it. eat. It’s interesting to watch it eat. It opens its mouth repeatedly, sticks out its tongue before swallowing the food completely, and licks the entire outer edge of its mouth plus its hemispherical eyeballs thoroughly. It looks very clean. . Its mouth is 3mm long and its tongue is less than 1mm wide, so the process is very delicate and lovely, and I am very satisfied as a careful observer. 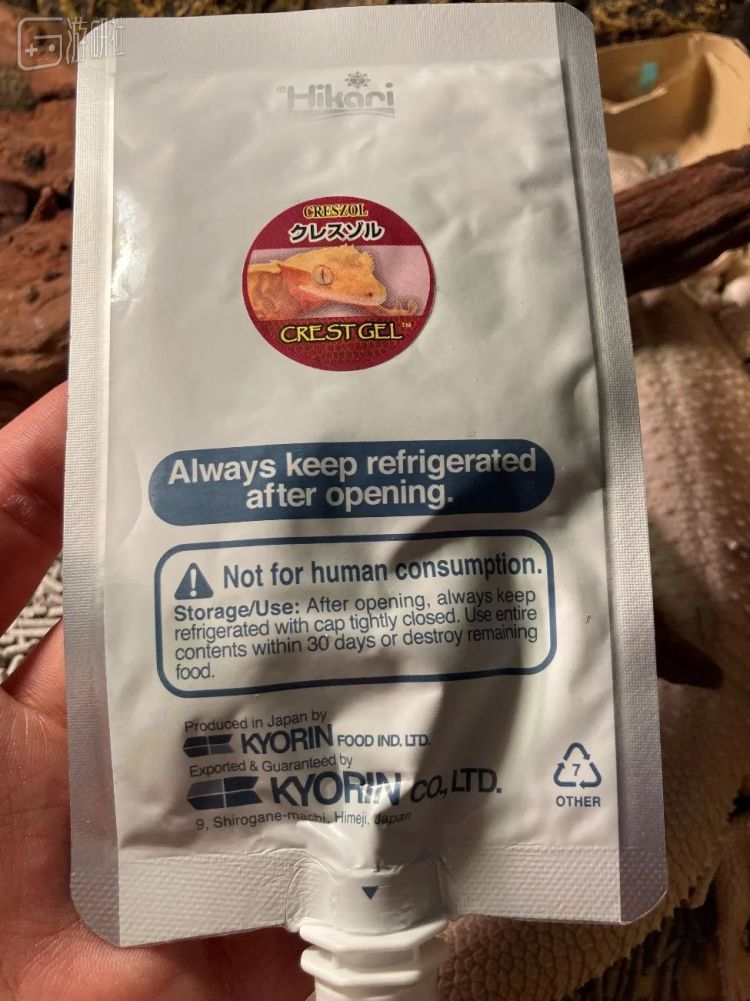 In order to make the posture of raising geckos more correct, I even bought a gecko gel specially. This gel is closer to liquid than lizard gel, so it can’t be shaken off after it bites into the mouth, but often gets all over the face, which can give full play to its cleanliness and lick its face and eyeballs clean. It has improved the meal and I am more relaxed.

Soon after, the gecko began to shed its skin. The overall process is similar to that of lizards, and the molting of the head, torso, and limbs has a sequence. But there is one part of the molting that really shocked me: its eyeballs will molt. This part of the skin is like an empty version of cold medicine. 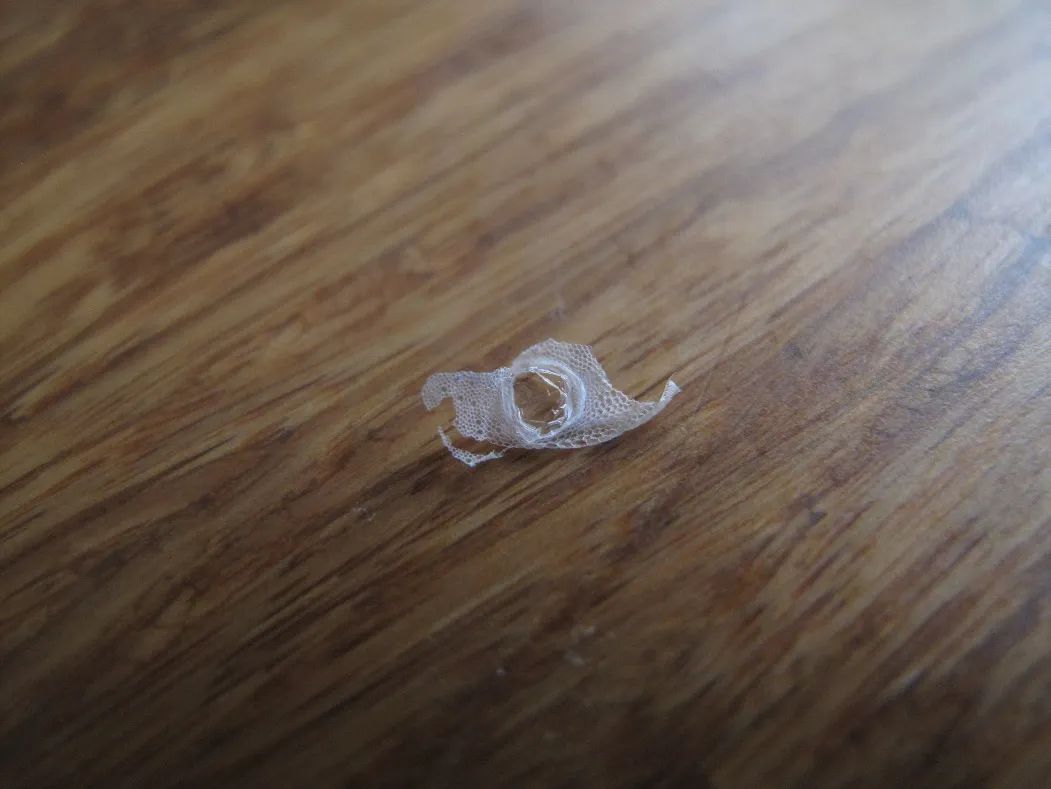 It does not climb walls, which makes it very easy to feed it. Every time I feed it, I leave the lid of the feeding box completely open and put it aside, fill it up in about half an hour, tease it with tweezers for a while, and then put the box Cover it. But if things go too smoothly, something will go wrong.

After having dinner two weeks ago and sending the lizards to sleep, I wanted to take another look at the gecko, only to find that the lid of the feeding box was open, and the disabled gecko that couldn’t climb walls was nowhere to be seen. I just remembered that it forgot to close the lid after feeding it in the afternoon.

I accepted reality almost instantaneously, and apart from sighing, I was quite calm in heart and action. I also deliberately entertained myself with conspiracy theories: not being able to climb walls is just a trick it uses to create escape opportunities. Reason tells me that in order to capture such a small and flexible creature in this messy home, unless it comes to me out of gratitude. 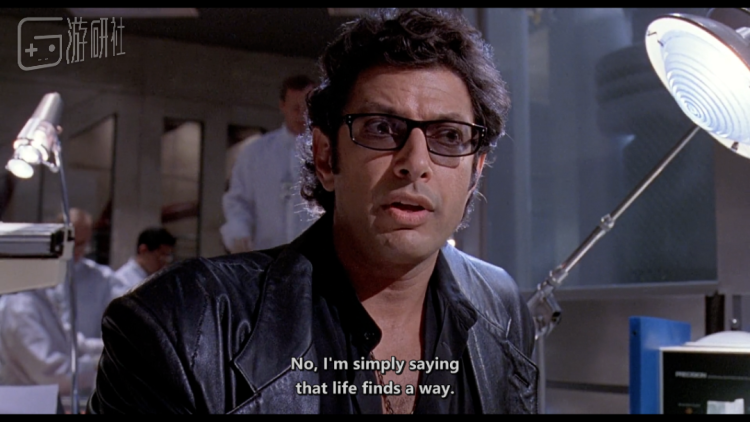 For the next week, the line from Jurassic Park, “Life finds a way.” lingered in my ears many times, as if giving me a new understanding of life.

Last Friday midnight, I dragged my exhausted body home after volunteering and just stepped into the shower. Guess what? Yes, another shadow flashed under the crotch.

This repayment seems to come a little soon?

The big drama of closing the door to catch the tiger was staged again, and half an hour later, it was arrested. But I immediately noticed that something was wrong, its tail was a lot shorter, and it seemed that it had performed a tail docking technique recently. On closer inspection, it doesn’t have the ugly markings I’m familiar with, so it’s likely not the one that escaped last week. 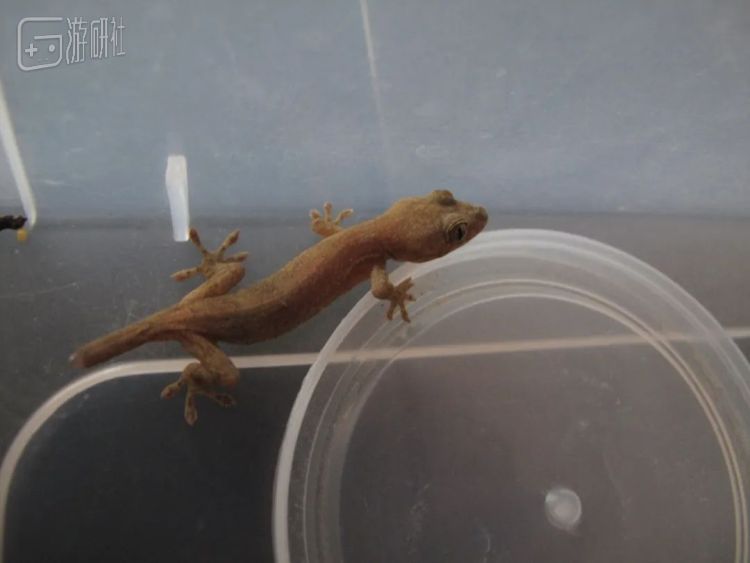 After putting it into the breeding box, another more conclusive evidence appeared: it is not disabled, it can climb walls, and it is very fond of climbing, and every time it will climb to the lid to rest. That could mean two things: first, it’s a few more levels harder to feed it, and second, it’s an honest gecko and doesn’t know anything about tricks.

On the bright side, because it likes to climb walls, at least it won’t happen in the future where it forgets to close the lid of the box after feeding.

A few days after catching the first gecko, my mother came to my house to see the gecko and said that catching the gecko would bring good luck. But I didn’t ask her if she would suffer bad luck if she caught it and let it run away, and what would happen if she caught a docked gecko.

As for why my family lives so high and is so favored by geckos, I am too lazy to think about it. 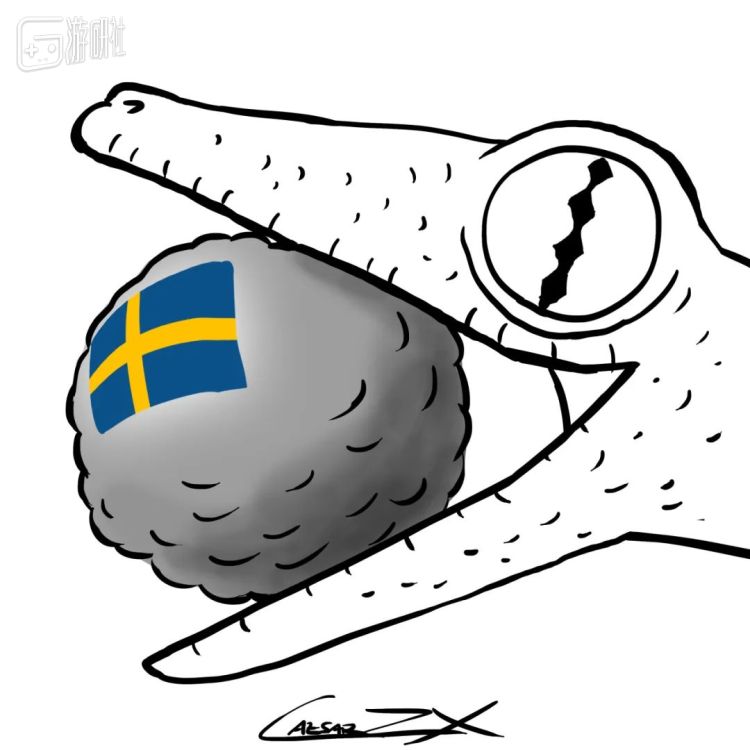 I’ll consider feeding this gecko to the lizards for the next month if I find it too tiring to feed. -CaesarZX

This article is reprinted from: https://www.yystv.cn/p/9504
This site is for inclusion only, and the copyright belongs to the original author.