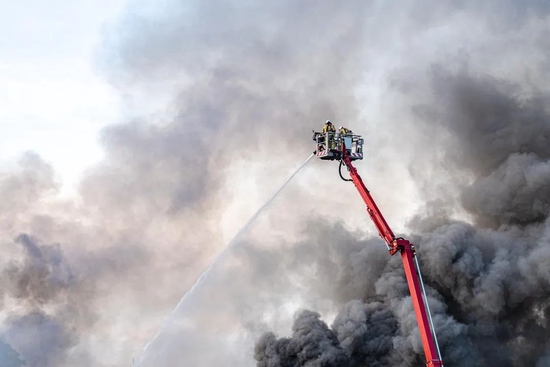 This grand vision stumbled in 2022: deliveries in August were cut in half. At the same time, Ideal also suffered a serious brand image crisis.

The common reason behind the two things is that Ideal wants to bring forth the new and the history of one model is coming to an end, and Ideal ONE, as the front wave, has to make way for the back wave.

During this process, Ideal simply and rudely announced that the ONE would be discontinued, with a discount of 20,000 yuan. This year, the L8, an upgraded model of the ONE, will be launched.

Many car owners did not know the news about the L8, and even got the exact news from the sales staff that the L8 would not be launched within this year, so they chose to buy the ideal ONE. As soon as I bought it, the new car turned into an old car, and the blood loss was 20,000 yuan. For this reason, the car owner began to defend his rights and complained, calling it poor manufacturing information to cut leeks, and the relationship between the brand and consumers became very tense.

In commerce, product iteration, upgrade, and reasonable price adjustment are all normal business behaviors, but the rights and interests of consumers and enterprises also need to be balanced. If you lose the trust of users and lose word of mouth, how can you get to the top of the industry? ?

So, why is Ideal in such a hurry to stop the production of Ideal ONE? Why are deliveries cut in half? What will be the impact after multi-model combat?

Ideal ONE: The end of the popular car

ONE is the hero of the ideal car.

In 2015, after the establishment of Li Auto’s predecessor, it publicized two product forms: the “small and beautiful” smart light tram SEV and the “large and complete” extended-range electric SUV, one for short-distance travel, the other for no Mileage anxiety.

The idea of ​​walking on two legs was ultimately aborted because the market classified this SEV as a low-speed electric vehicle, and no relevant policies have been introduced in China.

On the road of SUV, ONE single-handedly made the world for the ideal car.

In the concept of founder Li Xiang, Apple has a high price, but the product experience is higher, and it is a more cost-effective product. The ideal car should create an explosive product like the iPhone series.

A car is a home that can move, especially in the era of new energy vehicles. The difference between products is greater than that of mobile phones. It also extends from traditional fields such as power that mainly exists in the fuel age to intelligent experience and scene mining capabilities.

This market can accommodate more differences, so each car company has its own selling points. For example, Xiaopeng focuses on technology and intelligence, NIO focuses on ecology, and Ideal relies on precise positioning to open up market space. Ideal ONE becomes the first model Models with monthly sales exceeding 10,000.

The resources are concentrated on a single model, superimposed to accurately solve the mileage anxiety and the pain points of family cars. The positioning of “Daddy’s Car” makes Ideal a leading company in new energy vehicles.

Li Xiang once set a target of selling 15,000 units a month when the Ideal ONE was launched.

In terms of delivery volume, Ideal ONE can deliver a maximum of 14,000 units in a single month, and the ONE has not yet reached the goal of 15,000 units. 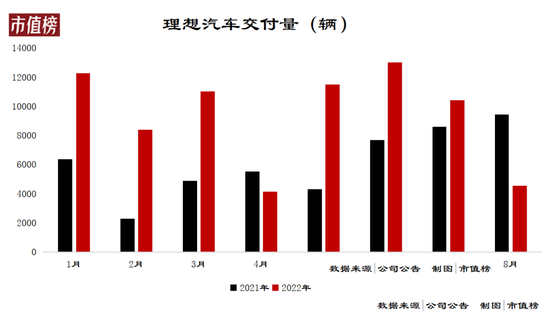 On September 1, Li Auto announced that the Li Li ONE would be discontinued. The shutdown is largely due to the fact that production capacity is being ceded to new models.

According to the plan, Li Auto will deliver 10,000 L9 units in September, and the L8 will be released in early November 2022, and will be delivered upon release. The former is a model with a price higher than the ideal ONE by about 100,000 yuan, and the latter is an upgraded replacement for the ideal ONE.

At present, Li Auto has two production bases in Changzhou, Jiangsu and Beijing. Among them, the Changzhou factory has an annual planned production capacity of 100,000 vehicles, and is undergoing a second-phase capacity expansion. The Beijing factory is still being upgraded and rebuilt and is expected to be put into production in 2023.

Li Auto delivered about 75,000 units from January to August this year. Based on Li Auto’s current annual production capacity of 100,000 units, its capacity utilization rate is close to 113%.

Li Xiang also once said, “It is necessary to complete the delivery and ramp-up of the L9 first. It is too difficult for two new models that can deliver over 10,000 new models in the first full month to ramp up production at the same time.”

It is understandable for companies to pursue profits and let production capacity give way to products with higher profit margins, but this approach obviously affects the ideal brand image.

What also affects the brand image is that there is a problem with the air suspension of the explosive reserve army L9.

The large SUV market itself is relatively niche, and Ideal fills the market vacancy by playing a card suitable for families. The lack of brand image has a greater impact on the vertical ideal of the audience than that of car companies with more models.

Delivery cut in half: involution and left and right fight

Along with the news of the production stop, there is also news that the ideal ONE has been reduced by 20,000 yuan. In addition to clearing inventory, price cuts also put pressure on performance.

At the beginning of September, as soon as the delivery volume in August came out, the ideal result was surprising, with 4,571 vehicles delivered in a single month, a year-on-year decrease of 51.5% and a month-on-month decrease of 56.1%.

This embarrassment is not an industry-wide problem.

So while August’s delivery figures are ugly, it’s not unexpected.

It’s just that with the blessing of new cars, the delivery volume has dropped. On the one hand, it is because under the background of the roll-up of new energy vehicles, more competitors have poured into the track of the grandfather’s car. Dad has fewer choices, but now he has more choices. For example, the Wenjie M7 jointly developed by Huawei and Celis is a direct competitor of the Ideal ONE. It also uses the program extension technology, and achieved a score of 20,000 orders in 4 hours at the time of booking. On the other hand, there is mutual exclusivity between the ideal old and new products, and they roll themselves.

Generally speaking, buying a car of 100,000 yuan is a price band, which is enough to separate the target users of L9 and ONE. Idealist also said that the proportion of users who originally planned to buy ONE would switch to buying L9 within 10%.

In fact, the impact of L9 on ONE was greater than expected, and the ideal co-founder and president Shen Yanan also expressed surprise at the earnings conference.

Li Xiang called it the best family flagship SUV within 5 million, and it also hit users. After 72 hours on the market, the order volume exceeded 30,000. At the beginning of August, Ideal announced that the cumulative orders for L9 exceeded 50,000, and the confirmed order orders exceeded 30,000.

Consumers pay the bill, but if the production capacity cannot keep up, the waiting time is too long, and consumers who cannot buy the order have other options.

And if L9 can’t become a hit, the ideal will be farther from profitability.

Getting farther and farther from making a profit

For a long time, the ideal is the new energy car company that is closest to profitability: the ideal gross profit margin is the highest among the new car manufacturers, and it will exceed 20% by 2021.

In the long run, from 2011 to 2020, whether it is Tesla of new energy, or traditional fuel car companies such as Geely and BMW, the gross profit margin level is also at the level of 18%-20%. 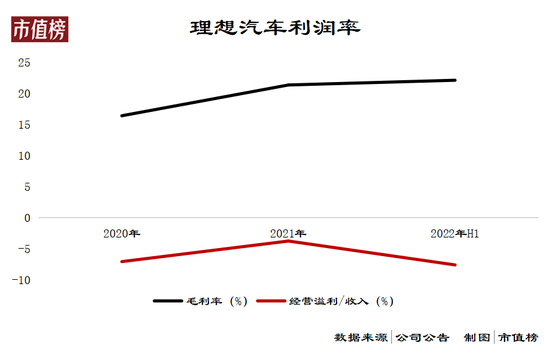 The ideal gross margin is higher and there are two decisive factors:

First, the cost of the extended program technology route is lower.

Second, one model has always been in the world, which is conducive to reducing unit fixed costs through large-scale production, thereby reducing the total production cost.

For example, in the first half of 2020, the delivery volume of Ideal ONE was less than 10,000 units, and the market value list calculated that the corresponding cost was about 250,000 yuan per vehicle.

The superimposed ideal has always been more “housekeeping”, and the ability to control expenses is more prominent, so the ideal does not have such a scary net loss rate, and it is only a step away from making a profit.

Therefore, in the short term, the ideal seems to be a little closer to profitability, but there are also uncertain factors, such as the possibility of price involution brought about by the competition between M7 and L8 mentioned above.

In the long run, the original two supporting logics with better profitability will fail.

From the technical route, it is well known that program extension is a transitional technology. Ideal is also developing two pure electric platforms – Whale and Shark, and plans to launch at least two high-voltage pure electric models every year from 2023.

On the one hand, for pure circuit lines, the ideal starts late, so the growth of R&D expenses has been higher than the growth of revenue. 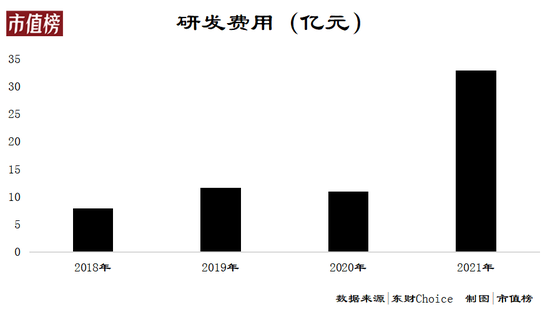 From the perspective of models, at the performance conference call, Li Li revealed that from the launch of Li Li L9 to next year, Li Auto will launch 3 products, including the new flagship program and BEV high-voltage platform products. The scale effect will be more difficult to achieve. big.

Of course, judging from the current cash and equivalents of more than 50 billion yuan in Ideal Auto, and the positive cash inflow from operating activities, Ideal does not have any financial pressure.

However, all these discussions are based on the premise that the competitive landscape has not deteriorated significantly, and new energy vehicles require technology, capital, and supply chain capabilities, so traditional fuel vehicles, companies with Internet genes, and technology can all be cut in. This is precisely a highly variable industry.

This article is reproduced from: http://finance.sina.com.cn/tech/csj/2022-09-07/doc-imqqsmrn8170016.shtml
This site is for inclusion only, and the copyright belongs to the original author.